Round 6: John Larkin vs. Eivind Nitter 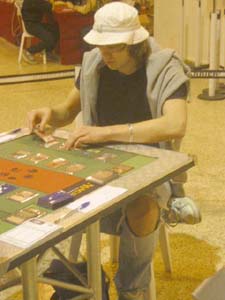 Eivind Nitter: former European Champion.No need to introduce any of these two. Nitter won the dice roll and decided starting is irrelevant. What he truly wanted was to have his librady and graveyard and his left side. So they traded places and Larkin battled long and hard to keep the table from wobbling. Eventually he gave up.

The Irish started the hostilities with a secodn turn Skirk Drill Sergeant followed by the morph on turn three. There is always a morph on turn three. Like a twist on Agatha Christie's novels. Nitter played Flamewave Invoker and traded it for the Sergeant. In came two more morphs for Larkin and Nitter smiled when he played a Goblin Clearcutter.

Eivind: "I love these guys."

With the morphs finally under control Nitter played his own morph. They pilled monsters for a few turns until Larkin unmorphed Skinthinner to ice Needleshot Gourna. That same Skinthinner tried to trade with a morph but Eivind Nitter revealed Towering Baloth.

That gave John a bigger problem to solve. On the next attack he proved he was up to the task, using Cruel Revival to both kill the huge Baloth and reclaim the Skinthinner. Meanwhile his Withered Wretch was making short work of the creatures in Nitter's graveyard.

Eivind's Symbiotic Elf tried to trade with Larkin's morph but it turned out it was facing a Charging Slateback. Larkin played a morph on the next turn, and Nitter correctly judged for the Skinthinner. A good target for his Chain of Plasma. Confident, the Norwegian sent two creatures in and played a Dragon.

Again John Larkin was up to the task He played Aphetoo Dredging to return several Zombies - including the restless Skinthinner and the Wretch - and got ready to kill the flying Monster. But Nitter was somewhat ready for it: he played Doomed Necromancer.
ñ 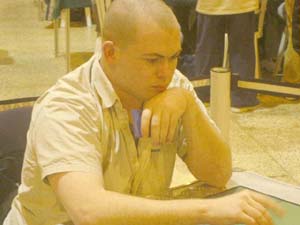 John Larkin: Ireland's Pride and Joy.John: "How many times do I have to kill the Dragon?"

To help the Dragon on the his only swing - for the moment - Eivind Nitter played Macetail Hystrodon. The morphed Skinthinner chump the Hystrodon and unmorphed to get rid of the Dragon. When Larkin replayed the Wretch Nitter answered by sacrificing the Necromancer to get the Dragon. It was all over.

Nitter started his a second turn Lightning Rift and third turn Nantuko Husk while Larkin followed the usual path: third turn morph. The morph went unblocked and after thinking for a while Larkin decided to Death Pulse the Husk away. Sure enough Nitter's fourth turn play was Symbiotic Elf.

Withered Wretch and Thoughtblood Primoc joined Larkin's crew but Chain of Plasma took out the flyer. To replace it the Irish had Screeching Buzzard. On Nitter's ide Wirewood Herald - another close friend of the deceased Husk - and Needleshot Gourna entered the fray.

Without a way to attack Larkin played a morph. For the first time Nitter got his Rift working killing the second morph - Fallen Cleric - before playing a Flamewave Invoker. Things were getting out of hand for the Irish, especially when Nitter reached eight mana. 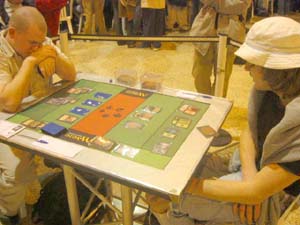 The plot thickens.To get rid of the Invoker, Larkin played Crested Craghorn, provoking the Goblin. As a departing gift the Invoker left Larkin at 13. The Gourna sarted attacking and Larkin answered with his Slateback. The result was the death of the Wirewood Herald. n came Stonewood Invoker and Doomed Necromancer. A Erratic Explosion got the Invoker out of the way, and the Wretch removed it, before things got out of hand.

Still Eivind Nitter drew creature after creature getting Skirk Outrider and Elvish Warrior. Despite having ten points of life to work with John Larkin was feeling the pressure. The Outrider took him to six but he played a Goblin Dyamo to slow things out. Nitter found a Forgotten Cave to cycle killing the Wretch. The Outrider traded with a morph and Screeching Buzzard and suddenly Larkin had the Dynamo up against the creatures.

The Necromancer traded placed with Skirk Outrider and Eivind Nitter sent the whole team in. The Dynamo did the best but Larkin dropped to one. His next draw was another land and all he could was extend his hand.