Round 6: The Jokas vs. Ubermenschen 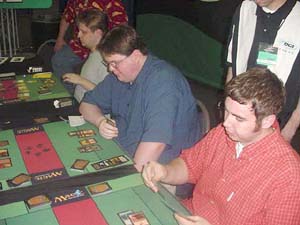 "I never ever beat Ben. Ever." Those were the words muttered by Kyle Rose to his teammates as they sat down for their must-win Round 7 Feature Match.

Rose, a former US National Champion, heads up The Jokas—a team of his local pals Norman Woods and Eric James that stormed GP New Jersey last year in this same three-man limited format. That win earned them a trip to the Masters series and a whole pocket of loot. They're back looking for a second GP win at the format and find themselves facing some tough opposition as the day draws to a close.

Brian Kibler, Ben Rubin, Ken Ho are the Ubermenschen. Ho is best known for winning PT Osaka a couple years back, and Kibler and Rubin may be the most accomplished American deckbuilding duo this side of New York City. This team has had lots of Grand Prix success individually, and are on the short list of favorites in any event they enter.

Kibler came out with the nice start of Elvish Warrior and Wirewood Savage against James. There was a tense moment when James untapped after playing a Mistform wall on turn three, but he had no Lavamancer's Skill—just a Shock for the Savage.

In seat B, Rubin and Rose were waging a war of attrition. A big pile-up involving Death's-Head Buzzard, Festering Goblin, and several other attacking and blocking creatures left Rose's Zombie Cutthroat as the only creature in play, but Rubin simply tapped all his lands and added Soul Collector to the table. 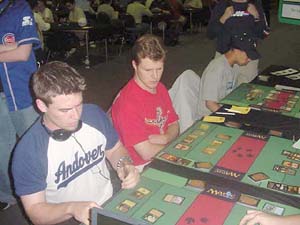 Ho and Woods were locked in a very interesting fight in the C seat. Ho had blue-white, and Woods had the rarely-seen green-white combination. Both decks were full of high-toughness defensive creatures, but Woods had the upper hand with a Timberwatch Elf and a Dragonstalker, among others, against Ho's Whipcorder-led ground defenses.

In the middle, Rubin's Soul Collector did the dirty work, killing Rose in a few attacks and giving the first game to the Ubermenschen.

Kibler, meanwhile, looked to be falling behind. He had a few Beasts in play, but was facing an Aven Fateshaper and a Mistform Dreamer in the air, plus James was holding a Slice and Dice. But Kibler Solar Blasted James down to 9 during his end step, untapped and played Wave of Indifference and Tribal Unity for two, dealing 11 in one massive lethal attack. James was stunned to say the least.

And, to finish the game-one sweep for the Menschen, Ho rallied behind a Glarecaster against Woods.

Game 2 of Kibler/James was all about Battering Craghorn; both players had two each, and they had to spend time and resources to stop each other's. James ended up with the last one in play, but it was taken down by Kibler's Wirewood Savage with a little help from Primal Boost. Kibler then started in with the Beasts, but James had his own clock in the massive Mistform Skyreaver. It looked like it would be a close race, but when James put Lavamancer's Skill on his Mistform Ultimus, the Skyreaver was free to bring it home and even the match at 1-1.

In seat B, the red-black mirror, Rubin was making quick work of Rose again; the Californian had a three-creature-to-none advantage against the Virginian in the midgame and all Rose could do was shake his head. The Ubermenschen were quickly up one match to none.

In Game 3 in the A seat, James got set up quickly with a Skilled Wall and Mistform Ultimus. Kibler was a little short on land and the few small creatures he could put out were no match. Skirk Commando and Mistform Dreamer sped things along for James, and it quickly came down to the Ho-Woods match. 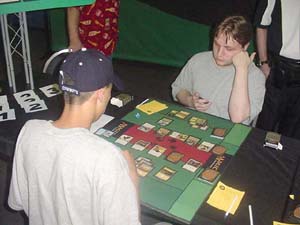 Game 2 in the ultra-slow white-on-white A match was in full stall mode when the crowd's attention turned to it. Ho had seven creatures in play, including a one-counter Daru Stinger, and Woods had eleven creatures out, one of which was Taunting Elf, which needed a reliable way around the Stinger.

Ho went proactive against the Taunter, targeting it with his Deftblade Elite's provoke ability. The Stinger shot the Elf, and the Elite fogged to avoid dying to the additional blockers assigned to it.

Woods had a plan, however, and it involved using Pearlspear Courier on his Noble Templar, making a nigh-unstoppable 6/9 attacker (thanks to Ho's Shared Triumph on Soldiers) backed by Daunting Defender. Ho lost a Mistform Wall the first time it attacked, and took six the second time before locking down Woods's Whipcorder with Frozen Solid. Deftblade Elite was free to play defense now.

Both players continued to add creatures to the table, and on the turn before time was up, Ho played his Glarecaster. He got a hit in with it on the first extra turn, taking Woods to 6. On extra turn number three, Ho went for it, sending in all his fliers and the Elite. Woods had no good options, and that was it.

Final Result: The Jokas were defeated by the Ubermenschen 2-1 and thusly eliminated.