World Champion Julien Nuijten needs little introduction to most Magic fans. In a little under a year he went from Grand Prix Top 8 member, to Dutch National Team member, to Rookie of the Year and World Champion, and now he's the only player guaranteed to enter the elite Level 6 of the Pro Tour Players Club this weekend. His opponent is Akira Asahara, a quiet star in Japan, but someone who is still looking for a breakout appearance here on the Pro Tour. He's widely regarded as one of the best Japanese Constructed deckbuilders and is the back-to-back Japanese Finals champion, quite a feat in that talent-rich country. 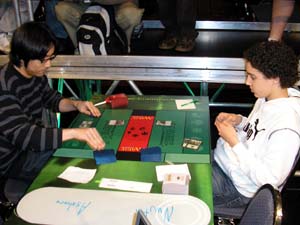 Either Asahara, left, or Nuijten would be eliminated this round.

In boxing, it's often said that styles make the fight, while in Magic the best matches often come from contrasting personalities and from different deck archetypes. Asahara is playing the fully Myojin-loaded version of Itaru Ishida's Myojin Flare deck, while Nuijten is running an admittedly underwhelming version of Gifts Control. Both players need a win here to both advance to Day 2 and stave off elimination from the tournament.

Nuijten started Game 1 with a double mulligan, but got off to a solid mana start, matching Asahara land for land. In fact, practically nothing happened in this game for some time until Asahara cast Heartbeat of Spring, and then used Time Stop to counter Nuijten's Gifts Ungiven. This left Asahara wide open to an attack from Sakura-Tribe Elder that turned ugly when Ink-Eyes snuck in and got rowdy, stealing Meloku from Asahara's graveyard. Asahara took it all in stride, fetching Myojin of Seeing Winds from his deck with Time of Need and then casting the Blue spirit and using it to draw 10 cards from his deck. Asahara then discarded four cards from his hand, but not before Nuijten created four illusions with Meloku. Julien looked to put Game 1 away on his turn by killing the Myojin with Horobi's Whisper, but Hisoka's Defiance shot down that idea, and Nuijten could only get the Japanese player's life total to six before Final Judgment and a very hefty Orochi Hatchery finished things off.

Nuijten did amazingly well for starting the game with a five-card hand, but he simply could not overcome Asahara's Myojin-based card advantage.

Nuijten again had to mulligan to start Game 2, showing that luck was leaving him a bit in the cold this match. Three Time Stops plus consistent gas for Asahara in Game 1 combined with three mulligans in two games - the youngest World Champ deserved a break at this point. Psychic Spear taking Kodama's Reach plus Cranial Extraction nailing a Meloku in Asahara's hand and two more in his deck were just what the doctor ordered, but Asahara brought the awesome Kite + Top engine online and slowly began rebuilding his hand. Nuijten played the only Meloku left in the game, creating some pressure in what had turned out to be a rather exhausting control-on-control matchup. 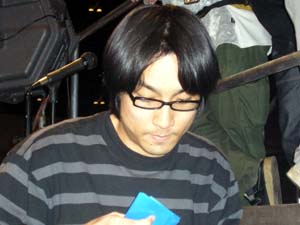 Asahara had the answers to Juilien's deck.

Another Top activation from Asahara gave a quick peak at Budoka Gardener, a card that screams "Tech!" at the top of its lungs in this incredibly land-heavy format, but Asahara chose to make the right play and cast Final Judgment, upping the number of Meloku in the RFG zone to four. After Nuijten passed the turn, the humble Gardener entered the game, looking to stir up trouble with three more lands from Asahara.

At this point, Nuijten began to run out of gas, flooding a bit on lands with only a Soulless Revival in hand, but a Top activation brought Final Judgment to the surface, and away went the Gardener as well … except for that Hinder Asahara sided in. The countermagic was clearly beginning to frustrate Nuijten -- every time the young Dutch player asked a question of Asahara's deck, the answer seemed to be an emphatic "No!"

The Gardener finally flipped and Boom! went the Dynamite, as an 11/11 Elemental came crashing through Nuijten's door and grinding Julien's Day 2 hopes beneath a clawed foot (assuming, of course, that Elementals have feet). One more draw step and that was it. Asahara advanced to Day 2, while Nuijten had to content himself with being the first Level 6 member of the Pro Tour Players Club.

Or as Julien put it after Randy Buehler announced it over the loudspeaker, "Yaus!"