Round 6: Justin Gary vs. Gabriel Nassif 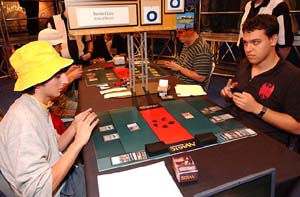 As Day 1 draws to a close, it's finally possible to see what the good decks actually are. After five rounds, both Justin Gary and Gabriel "Yellow Hat" Nassif had four wins against just one loss. That means their decks have graduated from "this might be good" or "I think this is scary" to being decks that actually are good. Gary is running an Oath of Druids deck -- remember Oath? It's harder to play with Gaea's Blessing, but it's still good. Nassif is running a mono-blue beatdown deck reminiscent of the old "Blue Skies" decks from the Masques-block era. He's got a million bounce spells to deal with all the reanimator that's floating around and he's even got Voidmage Prodigy to turn his little beatdown weenies into counterspells when necessary.

Gary pointed Force Spike at Nassif's early Brainstorm and that really stung – Nassif didn't find land #2 until turn 5. Nassif finally got to play a Cloud Spirit (you know – the 3/1 "high flier" from Stronghold), but Gary just Living Wished for Masticore and that was pretty much the game. There was some Unsummoning and Boomeranging involved first, but Nassif never drew any more creatures so he wasn't actually accomplishing anything but delaying the inevitable. Nassif did finally force a Shadowmage Infiltrator onto the table, but Gary figured out the clever strategy of saying "block" when it attacked ... Masticore isn't scared of creatures with Fear, it turns out. (I put Nassif on knowing this fact and just seeing if Gary would mess up.) 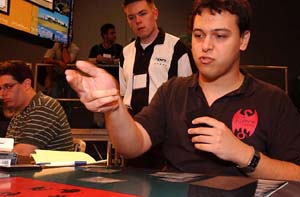 Nassif's draw in game 2 was even worse. By turn 4 all he had done was attack a few times with a Hapless Researcher. He floated two and returned two islands to play Gush. He still hadn't found anything to play so he sacked the Researcher ... and then burned for two and had to discard a card. Ouch. Gary knew he was staring across at an opponent with a hand full of permission, so he just kept activating Treetop Village and attacking with it. Six turns later Nassif died with 6 counters in his hand and the only spell Gary even attempted to play in the entire game was Accumulated Knowledge for 1.