Round 6: Kai Budde vs. Daniel Paskins 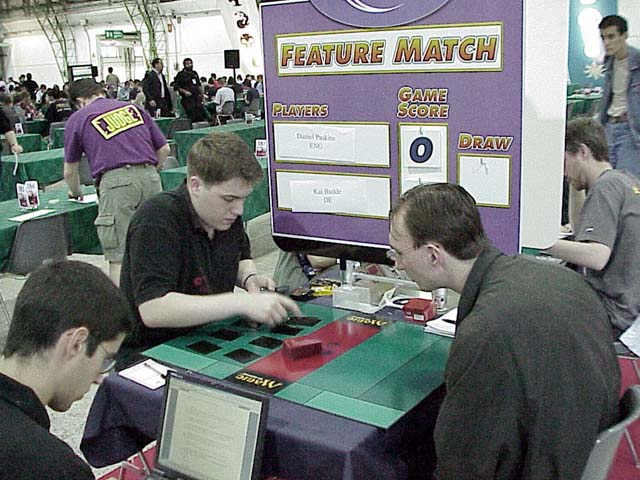 There is probably no use telling you who Kai Budde is. Some call him the Juggernaut, some call him the German Finkel but we will settle for three time Pro Tour winner for the time being. Daniel Paskins, famous for his Magdalene joke, is obviously an Englishmen. You know what that means, a lot of witty remarks and a lot of playtesting hard work.

After taking a mulligan, Kai opened up with a Ramosian Sergeant that Paskins immediately burned with a Seal of Fire. He replaced with a Fresh Volunteers and when Daniel tried to use a Stone Rain they had the following conversation:

Paskins: "Is it ok if I Stone Rain that land?"
Budde (playing a Memory Lapse): "Maybe later."

A Lin Sivvi was promptly burned out of the table by a Ghitu Fire and the same Stone Rain was Lapsed again before getting finally stopped by a Counterspell. Budde found another Sergeant and this time Daniel couldn't stop it straight away.

The chain got all the way to Lin before Paskins found a Seal of Fire and a Chimeric Idol. The Seal blew up the Sergeant but it was too late. Kai was now at full steam, ignoring land destruction spells and getting a Ramosian Sky Marshall.

Soon the Rebel nation was too much for Daniel to possibly handle and he was forced to concede.

Budde: "I'm sorry. I did take mulligan."
Paskins: "So that was the easy game, before you bring your disruption in." 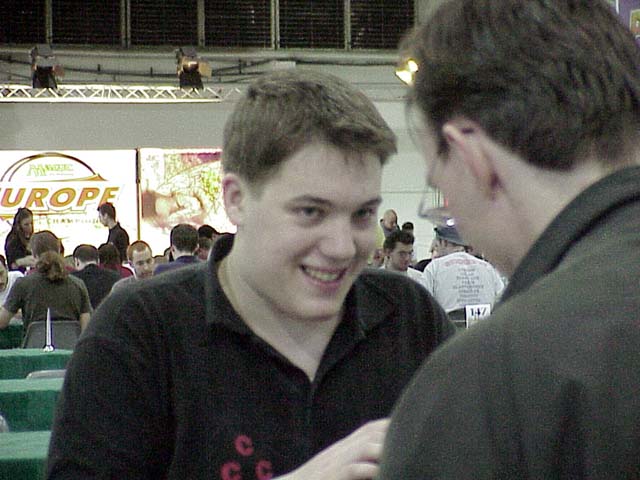 They both went into sideboard mode still talking about the first game and their decks trading mutual joking accusations of hate metagaming. Here are the changes:

Budde: took out three disenchants, one Defiant Vanguard, Fresh Volunteer, three Absorb to bring in four Disrupts, two Parallax Waves, one Lawbringer, one Reverent Mantra.
Paskins: took out two Tectonic Break to put in a Flametongue Kavu and a Boil.

This time the game was slower with the first play coming when Paskins tapped out in his third turn.

Budde: "Oh, he is walking right into the Disrupt!"
Paskins (playing a Chimeric idol): "Not really."
Budde (before Memory Lapsing it): "Oh."

Budde then played a Lin Sivvi and protected with a Reverent Mantra (losing a Defiant Falcon) from a Flametongue Kavu. The Idol finally came in but Lin was already calling a Falcon.

A second Idol helped the Englishmen's cause and a double Shock brought down Lin Sivvi slowing down the German. The two Idols went into the Red Zone and Budde found a Vanguard to block the second Idol, killing the first with a Sky Marshall keeping his score sheet clean. 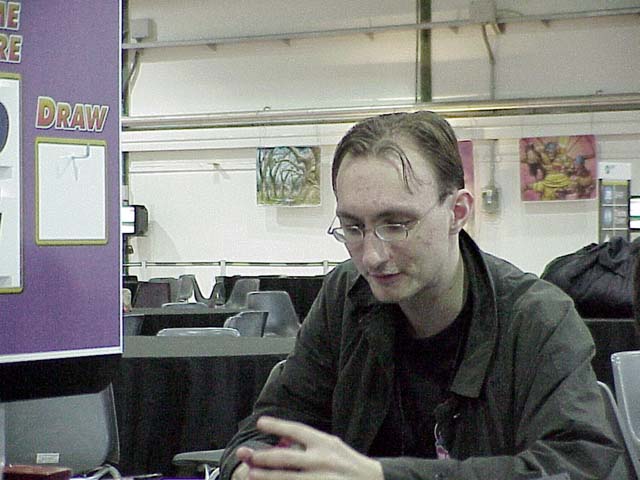 Still Daniel was in trouble as the lone Defiant Falcon set out to rebuild the rebel horde. He shot down the Falcon with a Seal of Fire but it was a turn too late, there was already a Lin Sivvi on the table once again. Despite losing his last Blue source to a Pillage his recruiting was in full steam.

Paskins dropped a kicked Skizzik but Budde was ready for that as well: he fetched out his sideboarded Lawbringer and dropped a Meddling Mage naming Tahngarth (a card he repeatedly said he feared a lot and he was almost certain Paskins was playing).

The game was now about over. Daniel played and attacked with a kicked Skizzik and Kai chumped with his Lin Sivvi just for the heck of it, before swinging in for the last time. The Rebel menace had once again claimed a victim.