Round 6: Kamiel Cornelissen vs. Mike Long 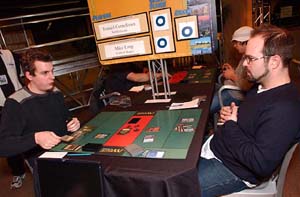 It would be hard to find two people with such polar opposite reputations and personalities, within Magic circles or otherwise. Cornelissen is very quiet and reserved, and lets his game talk for itself. On the other hand, a big part of Long's game is his talk. Both players are looking to bring their game back to top form. Cornelissen was heralded as the next big thing a few seasons back due to his back-to-back Finalist appearances in Pro Tours, and while he has had consistent finishes since then, he is looking to revisit Sunday once again. Mike Long was once considered one of the top players in the game, and won Pro Tour Paris way back in the day when the format was Mirage Block Constructed, with his signature ProspBloom deck. Once considered the most heinous villain on the Pro Tour, Long's finishes and antics have both decreased as the years passed by. The most likely scenario is that Old Man Long has mellowed out a little, or perhaps young punks on the Pro Tour have taken the spotlight from him.

Cornelissen played a turn-three morph creature, and Long stopped it with Mistform Wall. Ascending Aven joined Long's side, and the Wall died to Smother. This cleared the way for the morph creature, and Anurid Murkdiver came out a turn early thanks to Wirewood Elf. Long's Aven attacked for three, and a face-up Battering Craghorn held up the fort. Both of Cornelissen's creatures attacked right into the fray, and Long did not bite, letting both through. The creature was morphed, revealing Snarling Undorak, and Long took seven damage. His Aven attacked once again, and was joined in the sky by Mistform Shrieker. Cornelissen attacked with his whole team, and both of Long's creatures blocked the Undorak. It was pumped to 4/4, to take down both blockers, and also made the Murkdiver bigger for an extra point of damage.

Long was still in the game, however, and played Sparksmith and Mistform Dreamer. The second Smother of the game killed the Sparksmith, and was followed by Wellwisher. From this point, Cornelissen easily won the game as Long lamented the power of Snarling Undorak.

Long offered an intentional draw and was denied, so his mind turned to business. 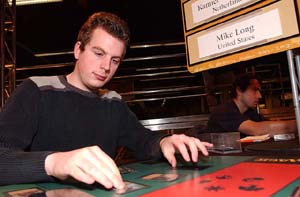 Long started off strong with a second turn Sparksmith, and Cornelissen had Wirewood Herald. Long added a morph creature to his side, and Cornelissen cycled a Krosan Tusker. The morph creature was turned up to reveal a Craghorn, and Sparksmith shot down the Herald; Cornelissen fetched Elven Riders. The Craghorn attacked for three, and Cornelissen started building up green fat with Barkhide Mauler. However, things got very ugly very quickly, as Long played Gratuitous Violence and Dragon Roost. Cornelissen had an impressive army on the ground with Barkhide Mauler, Elven Riders and Venomous Brackus, but the air kept filling with 5/5 fliers. Long joked "I keep drawing cards but all I can do is make Dragons." Cornelissen killed two off at once with Cruel Revival and Smother, and Long was not phased. "Keep killing them off, and we'll make more! Eventually I'll be making two a turn." The Riders attacked for three and Cornelissen made a 6/6 Stag Beetle; it was contained with Mistform Mask. Soon the growing army of heavy hitting Dragons became too hard to handle, and the game was over.

Long mulliganed to start, and jokingly offered the draw again. He sent his hand back a second time, and kept joking about the intentional draw offer that was "still on the table". Long looked at the now five card hand one by one, wincing as each was revealed. Cornelissen started with double Wirewood Herald, and Long had a morph creature. Both Heralds attacked into the morph creature, and Vitality Charm helped finish the job. It headed to the graveyard and was revealed to be Riptide Biologist, which Long obviously would have preferred to keep around. The Herald fetched Elvish Warrior, and it came out the same turn. Choking Tethers slowed down Cornelissen's attack a little by tapping down the Warrior, and Elven Riders fell to Pinpoint Avalanche. Cornelissen innocently asked how many cards Long had in hand, and the answer was three. Blackmail followed, and the choice was between Blatant Thievery, Sage Aven and Mountain. Long had five lands in play, and Cornelissen let Thievery head to the graveyard. 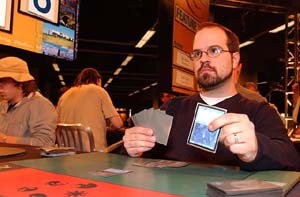 Sage Aven offered a blocker and gave Long a chance to dig for answers. Battering Craghorn came out face up, and Sage Aven attacked for one. "Two mulligans dawg! I might pull it out!" Cornelissen's Herald and Warrior attacked, and the Craghorn blocked the 1/1. Tribal Unity let the Herald live, and the Warrior got through for extra damage. Mistform Wall died to Smother, and Sage Aven blocked and killed the Herald, letting Cornelissen get Wirewood Savage. Mistform Mask went on the Warrior. Spitting Gourna made things look a lot worse, while Long was essentially drawing nothing bit land. He was getting bored, and started joking around with the Mask. "Wall! Elf! Wall! Elf! Wall! He's really confused." A turn later, he conceded.