Round 6: Louis Boileau vs. Boyd Hardie

Round 6: Louis Boileau vs. Boyd Hardie
by Josh Bennett 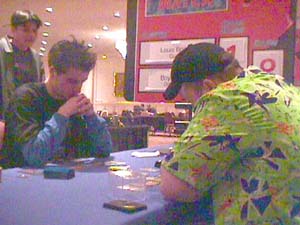 This match was a study in opposites. One one hand was Quebec's Louis Boileau whose praises are only beginning to be sung. On the other, the boisterous Boyd Hardie, prone to shameless self-promotion. While Boileau dressed in a reserved black-on-blue t-shirt/longsleeve ensemble, Hardie was dressed as some sort of Hawaiian street urchin. He may or may not have traded liquor to a hobo for the clothes he was wearing today. Boileau is running the Quebec crew's aggro red-green. Hardie, on the other hand, is banking his hopes on the awesome power of Ceta Sanctuary.

Hardie had no early plays, and sat mute while Boileau dropped back-to-back Mongrels. Hardie took a point to drop an ineffective Ceta Sanctuary. Boileau turned his men sideways and pitched Rootwalla and Violent Eruption. It was a jamboree that left Hardie at seven. 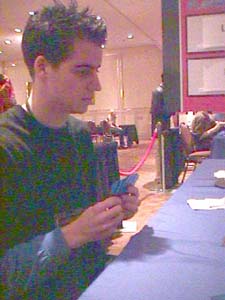 Hardie reeled in his chair. He played Flametongue Kavu, but had no illusions about it holding. Boileau pitched the other Eruption on his turn, taking the game.

"My deck is supposed to, you know, do stuff." - Boyd Hardie

While shuffling up for Game 2, Hardie noticed that his home province was incorrectly listed as the fictional "Ontariotario". It was clearly some sort of cruel joke about Hardie's prodigious waistline. When someone remarked that the first game had been "a pantsing", an enraged Hardie declared "Oh, I'll show you a pantsing", and started to unhook his belt. Fortunately he came to his senses before he did something that would certainly result in his ejection.

Hardie led in the second game with Rootwalla. When it fell to Firebolt he replaced it. Boileau went one better and showed him turn-two Mongrel. Hardie's choked reaction was reminiscent of a young Boss Hogg. He had to content himself with a Ceta Sanctuary. 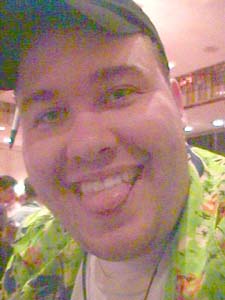 Boileau hit him and brought a Call token to the table. The Sanctuary earned its keep, madnessing out Arrogant Wurm. Unfortunately for him Boileau was ready with Flametongue Kavu. The sanctuary offered up Fiery Temper to dispatch it, but Hardie had no follow up. A Violent Eruption only took out a Token, and Boileau easily replaced it.

On Hardie's final turn, he added four and two blue in his pool. It was not Upheaval. It was two more Sanctuaries.

3 Call of the Herd 4 Firebolt