Round 6: Masahiko Morita vs. Tomohide Sasagawa 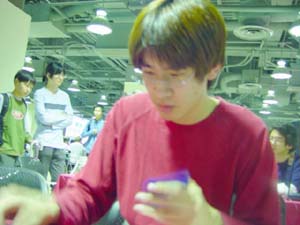 Two-time Grand Prix Finalist Masahiko Morita finally earned his stripes at Grand Prix - Nagoya, taking the day with his teammates Katsuhiro "Fidget" Mori and Masashiro Kuroda. He's on a tear today and looking to extend his streak. He's running blue-green Quiet Speculation, and doing quite well for himself. His opponent, Tomohide Sasagawa is a less well-known player, looking for that breakout performance. Sasagawa is with blue-green Threshold.

Sasagawa got things going with Nimble Mongoose and Werebear. Morita played a bear of his own. Sasagawa made a second and passed it back. Morita drew up with Deep Analysis, willing to bide his time. Mental Note nudged Sasagawa towards threshold, but he still didn't have much pressure on Morita. He hit for two and added Wonder and Rootwalla to his team.

Morita looked at his one card in hand, and made a Wild Mongrel and Speculated for three Roars. He then attacked and pitched Envelop and Roar to get to threshold. He handed it back to Sasagawa. He struck, losing his Werebear and dealing seven. He hired a Mongrel. Morita made his Wurm and handed it back. Sasagawa pitched Wonder and went for the win. Moment's Peace made the save. Wild Mongrel showed up to hold the ground.

That was Morita's cue to win. He Analyzed and smashed with his team. With four cards in hand, his Wild Mongrel could grow to 6/6, meaning that any two unblocked creatures would kill Sasagawa. Sasagawa scooped. 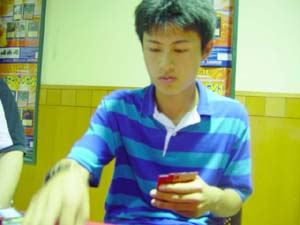 Morita opened Game 2 with Careful Study, pitching Moment's Peace and island. Sasagawa played Werebear. Morita matched him. Sasagawa made Rootwalla and passed it back. Morita Studied again, this time sending Wonder and Forest to the graveyard. He attacked and made a Sylvan Safekeeper. Aether Burst bounced the bear at end of turn.

Sasagawa's draw was sluggish, however. He could only add another Rootwalla and pass it back. Morita was waiting on his Grizzly Fate. He swung for one and replayed his Werebear. Sasagawa swung for six with his Rootwallas, but was stopped by Moment's Peace.

Morita tapped out for Grizzly Fate. Sasagawa responded with Krosan Reclamation. Morita sacrificed a pair of lands to ensure threshold. His army of bears waited. Finally, he drew another Werebear, and struck. The Rootwallas ate two of the Fate tokens, and Sasagawa's Werebear chumped. Sasagawa stood at nine. The second Werebear came down. The Restoration put the Fate back in Morita's deck, but three successive land pulls by Sasagawa had taken their toll. Two turns later the match was Morita's.