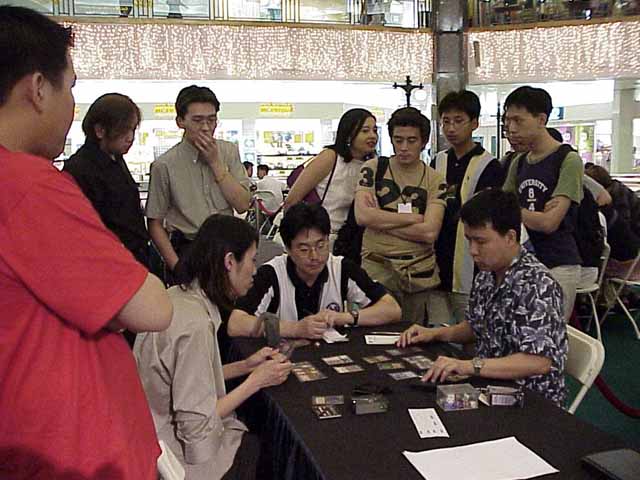 Reigning APAC champion Masaya Mori had already taken out Japanese national champion Tsuyoshi Dauyama, Australian national champion Stephen Campbell, and Koichiro Maki when he sat down for a round 6 feature match against the Hong Kong national champion Chi Fai Ng. Ng is the hometown hero and trying to defend his home turf this weekend. With a 5-0 record going into the last round on Friday, he was doing a pretty good job of it.

Game one got off to a fast start when Ng played a turn three Indentured Djinn. Mori gladly drew three cards and one of them was indeed an answer to the Djinn - Mine Bearer. Ng, however, had the answer to the answer in the form of Trickster Mage. Starting on turn 6 (after adding a Saprazzan Breaker to his army on turn 5), Ng proceeded to tap the Mine Bearer every turn so he could safely attack with the Djinn, the (unblockable) Breaker, and a Horned Troll. 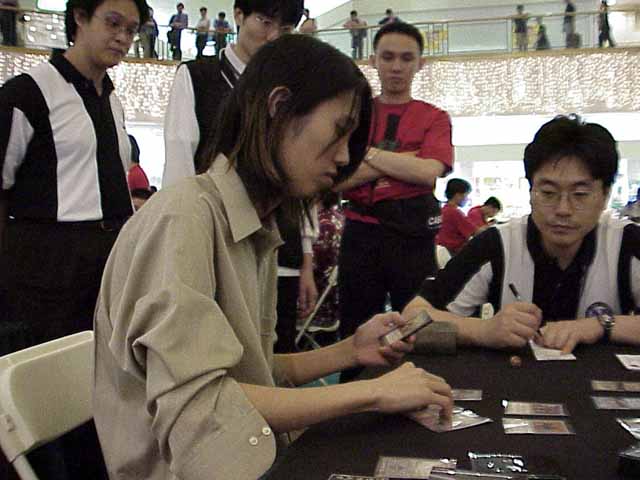 Mori was forced onto the defensive by this fast assault and he soon found himself blocked the Djinn with Thermal Glider every turn and discarding a card through Charm Peddler so he could repeat the process on his next turn. Mori drew and cast Troubled Healer, which allowed him to hold off the beats even longer, but he was only able to mount 3-power worth of a counter-attack since so many of his creatures were necessary for limiting Ng's damage to three per turn. Ng's plan of using Trickster Mage every turn just to tap Mine Bearer actually looked like it might work. Then when Ng drew back to back Withdraws, Mori couldn't even chump block anymore and Withdraw #2 extracted a concession from Mori. 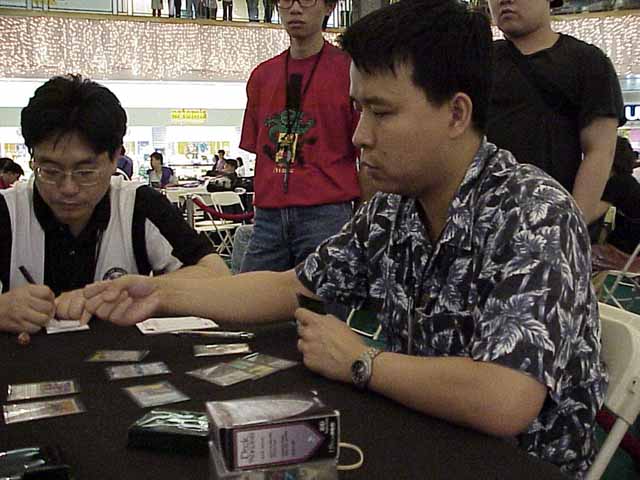 Game 2 was similarly savage. Ng led with a turn one Skyshroud Cutter and followed it up with Horned Troll, Living Terrain, and Saprazzan Breaker. Once his offensive pressure was established, Ng switched into time advantage mode. He used Seal of Removal and Withdraw to prevent Mori from ever mounting an effective defense even though Mori had Cho-Manno's Blessing in his hand. Mori's deck had no real removal in it and all his creatures seemed smaller than Ng's. Ng's green/blue fatty/bounce strategy worked flawlessly and then Invigorate wrapped the game up in a hurry.

Congratulations to Hong Kong local Chi Fai Ng for running the table on day 1 and heading home to think about his Standard deck with a 6-0 record already on the books.