Round 6: Masayuki Higashino vs. Koichiro Maki

Koichiro Maki is not only an old school player and someone who has played in an Invitational, but he is also the editor for Sideboard Japan. Even with that responsibility he manages to play competitively, as he’s doing today. Masayuki Higashino has been around forever, and has a National Championship under his belt as well as multiple Grand Prix victories. 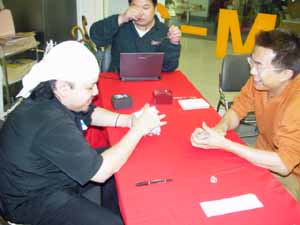 Maki didn’t do anything on turn three, but was waiting to use Dispersal Shield to counter Higashino’s first morph, which was Titanic Bulvox. Higashino played Krosan Vorine, and Maki had Mistform Seaswift. Solar Blast was cycled to kill it, and the Vorine got through for three damage. Frozen Solid locked it down, and Higashino came right back with Needleshot Gourna. Maki played his own large toughness creature in Gempalm Avenger, and Higashino had Ancient Ooze, which was a 10/10. Thanks to an attack and Essence Fracture, that problem was taken care of, and Maki pulled far ahead with Rush of Knowledge, drawing six cards. This was followed by Battlefield Medic, while Higashino summoned Sparksmith, followed by Krosan Vorine. Maki started to play some of the cards he drew on the previous turn, bringing out Mistform Seaswift and a morph creature. Berserk Murlodont made Higashino’s Vorine much more effective, and it took down Maki’s morph creature (Disruptive Pitmage).

Eternal Dragon gave Maki a good threat, and he needed it. Blue/white can have a hard time dealing with Sparksmith and this game was no exception, as the Goblin took out the Medic and the Seaswift. Attacking wasn’t much of an option since Maki couldn’t get his 5/5 Dragon through the 3/6 Gourna, and Higashino played Krosan Warchief to completely nullify that plan, as well as make the Vorine even more devastating. Maki got another big flier in the form of a 5/5 Aven Warhawk, which was followed by Keeper of the Nine Gales. One more bird, and he’d be able to bounce the Gourna and get through for massive damage with his fliers. Higashino couldn’t let that happen, and sent his Vorine to kill the Keeper. Maki played a morph and Higashino sent his Vorine after it. The morph flipped over to reveal Aven Liberator, and it survived. Sensing that he wouldn’t have a better opportunity, Maki attacked with his three fliers- Pinpoint Avalanche along with a Sparksmith shot took down the Warhawk, Needleshot Gourna blocked the Dragon, and the Liberator got through for two points of damage. Maki brought out another flying threat in the form of Shoreline Ranger, and it died right away to Higashino’s Vorine, which was essentially playing the role of a one-sided Abyss. Dragon Fangs eventually enchanted it, making the provoke Beast big enough to take down Eternal Dragon. Needless to say, the outcome of this game was obvious.

Maki started with Aven Farseer, and cycled Eternal Dragon on turn three. Krosan Warchief got a justified groan out of Maki, as he attacked for a point of damage in the air and ended his turn, leaving four mana untapped. Berserk Murlodont was played on turn four thanks to the Warchief, and the regenerating Beast army started to build. Ascending Aven gave Maki more pressure in the air, and the race was on. The Murlodont and Warchief attacked for five damage, and were joined by Goblin Clearcutter. Essence Fracture bounced them back to gain some tempo advantage, and the Murlodont came back out on the following turn. Maki attacked with his creatures for four damage, and put even more pressure on the board with Shoreline Ranger. Dragon Fangs made Higashino’s Warchief a 3/3, allowing it to get through for damage along with the Murlodont. Scattershot then took out the Aven, putting Higashino ahead in the race. A morph was played and flipped over right away (Disruptive Pitmage) to make the Farseer 2/2, and Pacifism stopped the Warchief. The Murlodont attacked for another three points of damage, and Solar Blast killed the Farseer. The Ranger attacked back for three, and was joined in the air by Primoc Escapee. This was enough to force a third game.

Maki mulliganed his opening hand. Higashino had a second turn Elvish Warrior, followed by a morph. Maki cycled Eternal Dragon, and played a morph of his own. Higashino’s creatures got through for four damage, and Higashino needed to use a landcycler to make his fourth land drop (he didn’t have any mountains). Maki summoned Mercurial Kite, and when Higashino attacked with his morph, Maki double blocked it with his morph and the Kite. After damage went on the stack, Maki’s morph flipped over to reveal Raven Guild Initiate, which survived combat and bounced back the Kite while Higashino’s morph died (Goblin Taskmaster). Higashino played Krosan Vorine and enchanted it with Dragon Fangs, taking out the Initiate. Maki flipped over his morph to reveal Mistform Seaswift, and it attacked for three damage. The Kite came back out, and got eaten by the 4/3 Vorine. Higashino was visibly upset, since he was still lacking a red source of mana. It was irrelevant, as time ran out and a draw was going to happen. Both players argued for a bit over one of them conceding, since a draw would make it very hard for either player to make Top 8. Both players are friends, so they revealed their hands and started discussing who would have won in a lighthearted way. After arguing that for a while, they started discussing who would have a better shot at being successful tomorrow.

Higashino- “I practiced Rochester draft once!”
Maki- “I didn’t practice Standard at all!”

Eventually the discussion got so ridiculous and long that the head judge came over and jokingly asked if they’d like to flip a coin. Mercifully after about ten minutes, Higashino gave in and conceded.