Round 6: Michael Debard vs. Raphaël Lévy 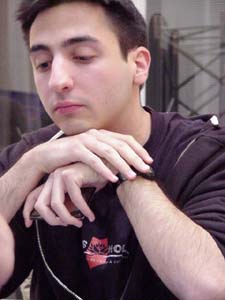 These two probably crossed paths a couple of times before. Not only are they amongst the best players in France and Europe but they have been at the top for what seems like ages. Both have one loss so far, so the loser of this match will have his back against the wall needing to win the remaining rounds to make day two. Still Debard has been somewhat away from the top levels recently and Lévy had to show him around the Red Zone.

A first turn Peek from Debard revealed a hand of five lands, Firebolt and Auramancer. After a few turns of dropping lands Michael dropped "monsieur" Mongrel and Nantuko Disciple to which Raphaël responded with a Fledging Imp.

A Firebolt ate up the Disciple before it could protect itself and Debard took to the skies with an Aven Windreader. The flying menace forced Lévy to review his plan and came up with an answer in the bloated form of a Cursed Monstrosity.

The flying colossus bumped into each other on the following attack and Debard dropped a Krosan Archers to stop the 2/2s across the table and a second Windreader (getting a very popular French interjection from Lévy in the process).

Raphaël tested the waters by sending the Auramancer into the Red Zone but Debard was willing to take damage instead of risking a trick. With the blue flyer ruling the skies, Lévy kept sending his creatures in and when he finally had his mana untapped Michael wasn't afraid to block. He traded his Mongrel for the Auramancer and the refreshed Firebolt (via Anarchist).

Sure enough the Wererat came in and another discarded land turn it into a 4/4 dropping Debard to six while Raphaël was at eight. On the next turn the Aven "Flying Circus" dropped him to five and Debard played a Scrivener to chump the Wererat and recycle his Syncopate.

The game was now in its central turns. Raphaël agonized for over five minutes on his next play. If he attacked Debard would have to block but would still keep the flyer, which had Lévy on a two-turn clock. Finally he made up his mind using a second Firebolt on the Scrivener and sending the whole crew in. The Archers blocked the Wererat.

Now at four Michael had to decide if he should swing with the Windreader or keep it back to block the six points of incoming damage. He finally settled for the swing sending the creature in to drop Raphaël to two and dropping a Thought Eater (while still holding his Syncopate).

Raphaël: "And you still have the Syncopate!"

He dropped his last card in hand, a land, and flashbacked the Firebolt with just enough mana to escape the Syncopate pulling a very, very close win. Debard had a Refresh in hand but regenerating the Eater would tap it still allowing the six points of creature damage to sneak through for the kill.

They sideboarded and shuffled in a blink worried about the mere twenty-five minutes still remaining in the round. Michael started of with a fourth turn Cephalid Looter, which Raphaël promptly removed with a Patriarch's Desire before trying to drop a Zombie Assassin. A Syncopate took care of that.

And he could only muster a Nantuko Disciple. Lévy was more into nasty tricks recovering the Desire with an Auramancer and using it to kill the Disciple. Debard was now in trouble and he was forced to blow up a Seafloor Debris to Firebolt the Auramancer.

Or maybe it was simply a trick. When Raphaël sent the Wererat into the Red Zone, an Elephant decided to ambush it but got foiled by a Thermal Blast. Since the Elephant would be making a comeback Lévy decided to step back and call the artillery. In came the Chainflinger.

The Elephant tried to punch through but Lévy still had plenty of cards to discard, so he blocked with his Wererat. On the next turn he felt the blood on the water so he sent a Firebolt and Flame Burst straight to Debard's head swinging with Threshold to bring his opponent down to four (with a Firebolt and a Barbarian Ring in play). Sure enough two flings of the Chainflingers later the game and the round were over.