Round 6: Mike Turian vs. Zvi Mowshowitz

Mike Turian is one of the most well-respected Limited players in the history of the game. He single-handedly broke the format for Pro Tour New York last September and his draft strategies not only carried his own Potato Nation team the championship, but helped his friends on the Car Acrobatic Team finish second. Zvi Mowshowitz hasn't won a Pro Tour yet, but with two Top 8s on his resume and a reputation as one of the best deck-builders in the game, most believe it is only a matter of time. They each came into round 6 with perfect 5-0 records. 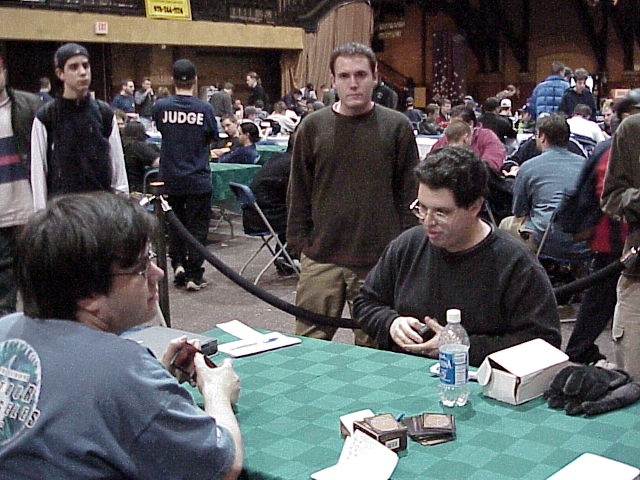 Turian is playing a black/red/green deck that he says practically built itself. The most interesting aspect is probably the Plague Spores that's sitting in his sideboard. "I hate Plague Spores - it costs 6 mana" explained Turian, "it always sits in my hand while my opponent kills me." Zvi built a blue/white/green deck because that's where all his best cards were, but he didn't seem happy about it, as he prefers red and black spells. After the match, Zvi confessed that he thought he misbuilt his deck and should have had black and red in the whole time.

Both players played pretty quickly and there was a lot of action in the first few minutes of the match. Turian played turn 2 Nomadic Elf and then cleared away Zvi's first two plays (Tower Drake and Might Weaver) with a turn 3 Reckless Spite. On turn 5, Turian used Terminate to destroy Zvi's other good creature - a Stone Kavu - and kept coming (now with Amphibious Kavu too). Zvi played an Obsidian Acolyte and Turian deadpanned "that's a little late, don't you think?" He then served with a hasted Serpentine Kavu. Zvi tried to stabilize the board with Alpha Kavu and Stormscape Apprentice, but Turian kept up the pressure with more of his patented "dorks" and they were soon shuffling up for game 2. 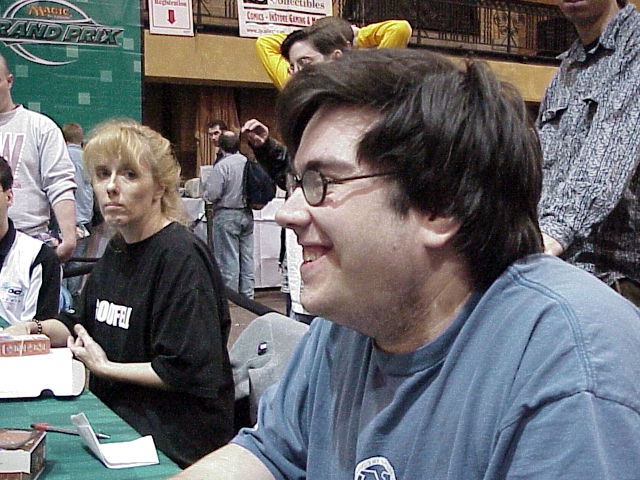 Game 2 started with dueling Kavu - Amphibious for Mike and Alpha for Zvi. Zvi showed off his sideboarding tech on turn 5 when he dropped a Swamp and a Phyrexian Bloodstock. The special ability isn't worth much, but 3/3 bodies are good against dorks. Turian used a sideboard card of his own - Plague Spores - to dispose of Alpha Kavu and Swamp, but Zvi top-decked a second Swamp and played Bloodstock #2. Turian's answer? Skizzik, with the kicker. Zvi traded one Bloodstock for Skizzik, but Turian just Recovered it and played it again. The parade of haste creatures continued on Turian's next turn when Serpentine Kavu came out to play. Zvi fought admirably, but Turian just kept playing creatures and trading creatures until Zvi ran out of creatures and, soon thereafter, life points. Turian threw down his had at the end of the game and he still had Terminate, Reckless Spite, and Mire Kavu in his hand.