Round 6: Mind the Glare 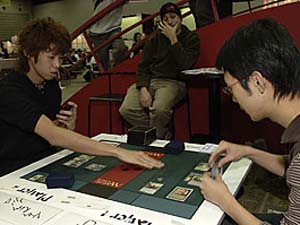 White-green Glare of Subdual deck that the Japanese have brought is the talk of the tournament. Eighteen of the 33 Japanese players here are running it and three of them are sitting pretty at 5-0. Katsuhiro Mori and Tomohiro Kaji make up two out of the three, and while they haven't been getting as much press recently as Kenji Tsumura and Masashi Oiso, they are both fantastic players.

Kaji started with a Llanowar Elves and followed with Selesnya Guildmage, while Mori had to discard after a turn-two Selesnya Sanctuary. The Guildmage crashed in for two and Kaji placed down a second Vitu-Ghazi. Mori just played out Wood Elves and searched up a Temple Garden, while Kaji was content to make a token and attack for three.

A Jitte showed up for Mori, allowing him to trade his Wood Elves for both a Saproling and the Guildmage. Kaji, however, had a replacement Guildmage and a Loxodon Hierarch. Mori started his turn with Wood Elves and then finished up with Glare of Subdual, a hugely powerful card in the mirror. He tapped Loxodon Hierarch but still took three from Kaji's other attackers. 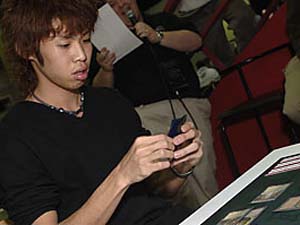 Kaji then destroyed Mori's Jitte with the legend rule and passed the turn with four mana up, representing Seed Spark due to having left his Llanowar Elves back. Mori forced the issue with a second Jitte, and Kaji indeed tapped four, but still destroyed the Glare of Subdual, correctly recognizing it as the more relevant card. He traded one of the resulting tokens with the Wood Elves and then lost his other Guildmage to the counters.

Kaji untapped and played out his own Glare of Subdual, then tapped Loxodon Hierarch and swung in. He tapped it again on Mori's turn to prevent an attack. Mori played out Wood Elves and Arashi, the Sky Asunder, but clearly didn't have a Seed Spark as his hand was now empty. Kaji was able to tap down Arashi and attack with four creatures, forcing Mori to chump-block his Hierarch. He then added a second Hierarch, effectively sealing the game.

Often when a group of players decides to play an obscure deck, they don't spend much time testing the mirror, because the only time they'll see the mirror is when they're playing against a teammate. This looked to be the case here, because the two players sideboarded for the matchup differently:

Both players spent the first few turns developing their mana bases with Birds of Paradise and Wood Elves, until Kaji wrecked Mori's board with a Jitte on an attacking Selesnya Guildmage. Mori then just played out a Vitu-Ghazi and passed the turn.

Respecting the possibility of Seed Spark, Kaji didn't attack, but instead simply tapped out for Yosei, the Morning Star. Mori indeed Seed Sparked the Jitte at end of turn, then untapped and placed down a Glare. He tapped Yosei and the Guildmage on Kaji's attack step. Kaji had a Llanowar Elves and Seedborn Muse, a trump card in this matchup that could allow him to successfully fight against Kaji's Glare advantage.

Mori untapped and added Llanowar Elves and Kodama of the North Tree, then tapped down three attackers, leaving his Kodama back and forcing Kaji to stay back. No matter, Kaji just increased his army with a token, a Loxodon Hierarch and a second Selesnya Guildmage. 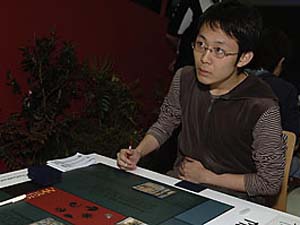 The one Wrath in Mori's deck was sounding pretty good right now, but he hadn't drawn it, and couldn't do anything on his turn. Kaji made on token on end step, then paid two life to put down an untapped Temple Garden for access to eight mana. Mori tapped four creatures and Kaji happily just made two tokens with his Guildmage.

When Mori again failed to do anything on his turn, Kaji channeled an Arashi to kill his own Yosei, tapping down Mori's board and leaving him wide open to a lethal attack.

After the match, they openly discussed the various sideboarding plans they used. Meanwhile Tomohiro Kaji couldn't stop smiling as he was now entering draft day at 6-0.