Round 6: The Mirror and the Throne 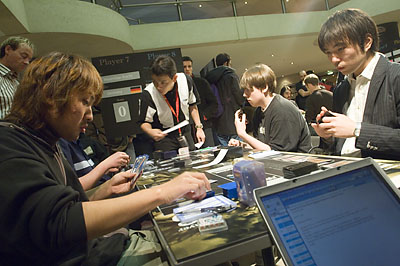 Takuya Oosawa and Shuuhei Nakamura are neck and neck in the Player of the Year race.

of these Japanese players come into this round at 3-2 with hopes of ending the day at a reasonable 4-2. However, this match goes much farther than "just" Worlds. As Worlds begins, Shuuhei is second in the Player of the Year race with 52 points, just 6 points behind Yasooka Shouta. With Shouta sitting at a 2-3 record on the day with one round to go, every match point is critical in the tight race to take the title. And that's not just on the mind of Shuuhei. Takuya is right there too at a tie for fourth place, so this match has huge implications for the Player of the Year race depending on how things play out both here and over the rest of this week's event.

For this match both players are running blue-white 'tron decks splashing black for the flashback power of Mystical Teachings and its synergy with Teferi. Synergies continue with Academy Ruins + Triskelavus for late game tricks, as well as the brutal power of Spell Burst when powered off the truckloads of mana this explosive deck can generate. Recently christened "TriscuitTron" it's a powerful archetype able to customize itself to the game as needed when handled by an experienced pilot, which both of these players certainly are. 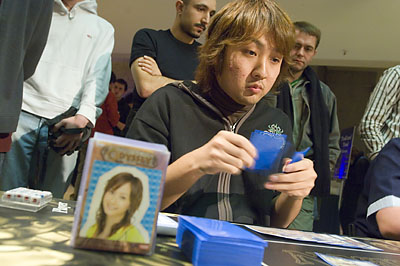 Takuya plays a tight game while his deck box looks sweetly on.

This was a tough, complicated battle. It threatened to be a blowout early as Shuuhei took a mulligan, then got stuck on two lands while his opponent had a full set of 'tron lands on turn four and a Signet to boot. However, Shuuhei soon found a blue-producing land and began firing off a heavy stream of card-drawing spells, steadily increasing his mana while powering up his hand in the process. During all this, Takuya slipped a Teferi into play, but seemed to have a hand gummed up with creature removal. Stuck on several useless cards and more mana than he could use, he was falling behind as Shuuhei screamed through his deck and prepared for his battle to get through Teferi. A few turns later Shuuhei was able to complete his own Urza set, followed by a very menacing Urza's Factory.

Having run Takuya out of counters by this point by casting so much card-drawing, Shuuhei got a Triskelavus onto the table and began swinging in with Factory-Workers and the Triscuit. Takuya was soon forced to Wrath to buy some time, but that meant his only positional strength, Teferi, was now neutralized. With Teferi gone Shuuhei was able to bring the full brunt of his now fully armed and operational battle station, er hand, to bear on the table. Takuya did finally manage to get a Tidings off, starting his own card advantage stream, but he was too low on life and cards to keep up and wasn't able to get out from underneath the Urza's Factory backed by a full hand of counterMagic. 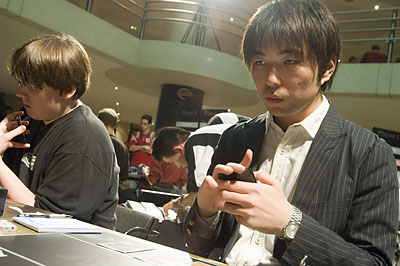 Shuuhei looks either tired or merciless, and possibly both.

Shuuhei had a very powerful start for this one, getting three Signets into play three turns in a row, but Takuya was able to mitigate that somewhat with an Annex on a 'tron piece. Both players kept developing their mana and drawing their cards, with no clear leader as each side raced to develop. Early on, Takuya looked to have the advantage, resolving Mystical Teachings, Compulsive Research, and a Remand on a flashed-back Think Twice, but when Shuuhei forced through a main-phase Careful Consideration, both players had full grips and lots of mana. Takuya had his own Careful Consideration while his opponent was tapped out, but Shuuhei was able to maneuver a Jester's Scepter into play, which nabbed 2 Compulsive Research, two different counterspells, and a land. Shuuhei struck again next turn, getting the 'tron set first. Passing the turn, he went for a Teferi at the end of Takuya's turn, but Takuya had Remove Soul to stop the Teferi without interference from the Jester's Scepter.

Both players were nearly out of gas at this point, passing the turn back and forth rapidly and hoping to hit more card drawing. But Shuuhei wasn't done yet, going for a second end-of-turn Teferi. Takuya tried responding with his own Teferi, but it ran into Remand, allowing Shuuhei's Teferi into play unmolested and allowing Shuuhei to untap with the legendary control-crusher in play. Shuuhei swung in for a quick 3, then passed the turn with a whole warehouse of mana available. Clearly out of gas with almost no hand left, Takuya ran his Teferi out hoping against hope it would resolve but Shuuhei showed the worst card of all for Takuya to see, Spell Burst with buyback and way more mana than needed to stop any other shenanigans Takuya might have tried under Teferi. Even with plenty of life left Takuya knew he was finished and conceded immediately.