Round 6: Mitchell Tamblyn vs. Kamiel Cornelissen 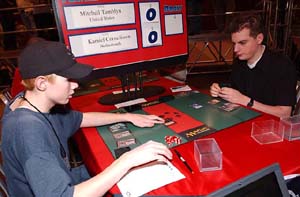 While no-one was watching, fourteen year-old Mitchell Tamblyn managed to go 5-0 on the first day. Jokes about inexperience and knee-high competitors aside, Tamblyn has done it with a focus rare for someone his age. Attempting to put an end to his joyride is Kamiel "The Glacier" Cornelissen, master of the untimed round.

Tamblyn started with Filthy Cur and then Last Rites. He pitched a pair of swamps and stole two Syncopates, leaving Cornelissen with Repel, Aven Cloudchaser, Kirtar's Desire and two land. Cornelissen cast the Cloudchaser only to have it Ghastly Demised. His topdecked Aven Windreader met the same fate. Thought Devourer stuck.

Cornelissen was at 12. Tamblyn made a Fledgling Imp and held back. Cornelissen Repelled it and hit, then again after Tamblyn replayed it. Peek showed Aether Burst, Psionic Gift and Zombie Assassin. They traded hits for four. Cornelissen bought time with Embolden. It was eight to six in Tamblyn's favor. 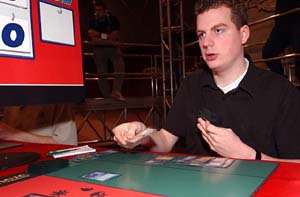 Treetop Sentinel from Tamblyn earned the Desire. Cornelissen hit him to four for his insolence. Pilgrim of Justice held the ground. Tamblyn attacked, dropping to three from the Cur, but finishing off the Pilgrim with Psionic Gift. Then he overtrumped with a Thought Devourer of his own. Cornelissen made an Aven Smokeweaver and cherished the Embolden in his graveyard. Tamblyn kept up the hits with Dusk Imp.

But then, oh then! Cornelissen turned up Persuasion, and suddenly he had two 4/4's batting for him. He swung and took down Tamblyn's remaining flyers. Tamblyn had to scoop it up.

Tamblyn mulliganed in Game 2, and stalled on two land. He got a Filthy Cur into play, his Crypt Creeper Syncopated. Cornelissen showed no mercy, busting Aven Smokeweaver into play. Tamblyn Bursted and made a Fledgling Imp. Cornelissen upgraded to Windreader.

Tamblyn wasn't out. He pitched to his Imp and sacrificed a land to Ghastly Demise it. His attack brought Cornelissen to ten. The Smokeweaver came back and stopped him cold. Then came Blessed Orator. Tamblyn's Sandstone Deadfall was unattractive considering his three lands. 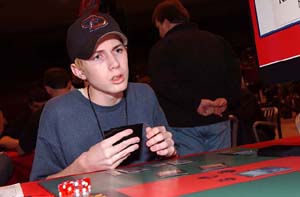 Cornelissen hit with the Smokeweaver. Repel put Tamblyn another turn behind. Tamblyn attacked again, putting Cornelissen to eight and himself to fifteen. He added another Fledgling Imp. Cornelissen showed the power of Control Magic yet again, his Orator making the Imp a roadblock.

If Tamblyn could have frowned more, he would have as Cornelissen dropped Sphere of Grace. The Smokeweaver struck again, and Tamblyn blew his Deadfall, leaving him with just one land. Cornelissen refused to attack with his Imp. For four turns nothing happened. Then Cornelissen found Mystic Zealot. Now his Zealot and Imp took to the air. With Syncopate and Rites of Refuse in hand, he sailed to victory.