Canada's Pascal Maynard has several Grand Prix Top 8s to his name, as well as a Nationals Top 8 back in 2010, so you could be forgiven for thinking that he has the upper hand in this match over John Cuvelier. While Cuvelier may sound like a relative unknown, he's now won two Magic Online Pro Tour Qualifiers, so is no slouch himself.

Cuvelier was very happy with his deck. "I think I was the only Golgari drafter at the table. I got a seventh pick Korozda Guildmage." Keeping his Guildmage company was another one, three Stab Wounds, and a Launch Party or two.

Maynard had been less constrained in his color choices, dipping into both Izzet and Azorius. However, the deck most certainly appears to favor one guild in play style than the other. See if you can't figure out which one by the end of this report. 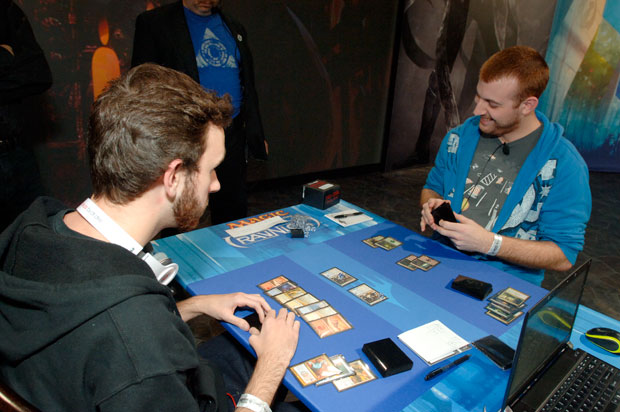 John Cuvelier and Pascal Maynard battled it out in a classic matchup of chaos (Rakdos) versus mostly order (Azorius, with a touch of Izzet).

Cuvelier won the die roll, and threw back his opening hand, while Maynard kept his. Cuvelier attacked with a Dreg Mangler on turn three, while Maynard paid for a Transguild Promenade.

Maynard Soul Tithe'd the Mangler, but Cuvelier was happy to pay for a few turns before finally replacing it with an Ogre Jailbreaker. Maynard gummed up the board with not one, but two Azor's Elocutors (per section 4.13 of the Azorius guidelines, lines 8 though 19). Cuvelier attacked with his Jailbreaker, and tried throw a Launch Party for one of the Elocutors (sacrificing a Gatecreeper Vine, pursuant to category five of the Golgari document, version 2) but Maynard Dispel'd any notion of that, as the Azorius cannot get behind "partying" during sanctioned play.

Cuvelier could only scratch his head as he tried to find a way out of this pickle, finally summoning a replacement Jailbreaker. Maynard shrugged, and was content to sit back and let the committee go through the requisite paperwork required to satisfy their Alternate Win Condition (forms signed in triplicate, and delivered no later than close of business). 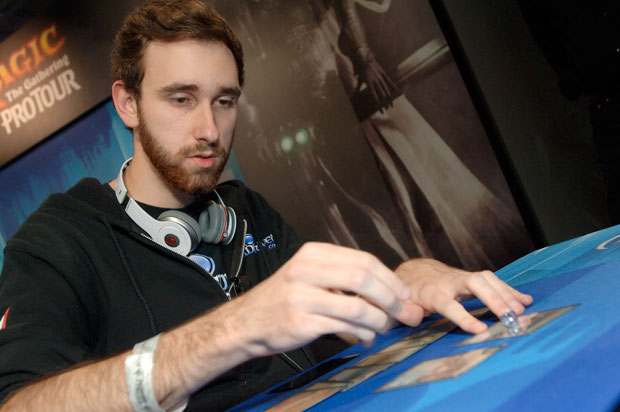 Your motion has been denied per section 5.29 of the Azorius guidelines, lines 27 through 31. Good sir.

Cuvelier attempted to come over the top with a Daggerdrome Imp, but Maynard employed a little Electrickery to brush them aside (allowable in certain circumstances, as outlined in the minutes of the Offensive Imp Uprising town hall meeting held just last week, actually). It wasn't long before the Elocutors passed the motion to allow their temporary Alternate Victory Condition petition, thus ending game 1.

Cuvelier began the second game with his Daggerdrome Imp, but Maynard wasted no time in shooting it down with an Izzet Staticaster. Cuvelier summoned an Ogre Jailbreaker, but lacked a Gate to motivate it. He followed it up with a Rubbleback Rhino, while Maynard attacked him with a Vassal Soul. Cuvelier summoned a Trestle Troll to hold off the flier, and attacked Maynard to 16 with his Rhino. Maynard went in search of something more compelling with a Thoughtflare, finding an Isperia's Skywatch to push his Soul through again, knocking Cuvelier to 17.

The Rhino crashed in again, dropping Maynard to 13, before being joined by an unleashed Dead Reveler. Maynard summoned a Seller of Songbirds, while Cuvelier brought forth another Rhino. The board was now busy enough that neither player was willing to attack.

Cuvelier finally made the first move with a Launch Party on the Skywatch, but Maynard had a Mizzium Skin for it. Cuvelier untapped, and gave the Staticaster a Stab Wound. Maynard considered keeping it around, but finally elected to direct it to shoot itself, to prevent any blood getting all over his life total. 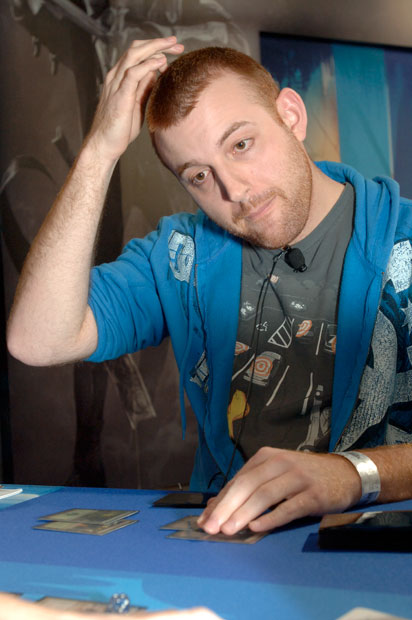 Cuvelier attempts to throw a few stones, along with some pointy objects, at his Azorius opponents.

"A good one," Maynard remarked as he drew for the turn, summoning an Archon of the Triumvirate.

"Do you have the Dispel again?" Cuvelier asked, throwing a Launch Party for the Triumvirate with his Reveler, but Maynard did indeed have the counter.

(Which is not surprising, considering the Azorius's stance on parties, as established in game 1.)

Maynard attacked with his now sizeable air force, detaining the Trestle Troll and dropping Cuvelier to 8. Cuvelier tried to summon a Dreg Mangler to mount a counter attack, but in a move not at all befitting the Azorius, Maynard punched it off of the stack with an Essence Backlash, taking a chunk out of Cuvelier's life total as it sailed through the air past him and out of the feature match area.

Cuvelier took a look at his life total, and under overwhelming pressure from the fliers, scooped up his cards, no doubt wondering where all of his Stab Wounds and Guildmages were hiding. Naturally, Maynard happily busied himself in yet more paperwork. This time, the results slip.