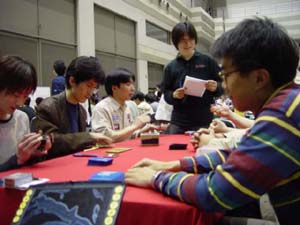 Sideboard Japan Columnists and ex-Executioners Ken'ichi Fujita and Koichiro Maki have joined up with Sideboard Japan reporter Isamu Fujieda to bust up the tournament. This round they face Mropaganda, a strong trio of Kanako Kawaguchi, Hideo Muroga and Rei Hashimoto.

At the far end of the table Fujieda was being frustrated by Hashimoto's Angelic Wall and his own inability to draw fatties. This gave Hashimoto plenty of time to dig with Compulsion.

Kawaguchi had a bit of a slow start of her own against Maki's blue-white, though Arrogant Wurm and Nantuko Disciple got through for a few points at a time. Maki hid behind Angelic Wall, Teroh's Faithful and Hypocondria.

In the middle, Fujita was getting thwarted by Muroga's weenies. He made a Carrion Wurm in hopes of blocking, but it was Butchered away. On the next attack he Repelled the Butcher to eat an attacker. Muroga had another in hand. Fujita fell to six on the following turn, and Muroga finished him in style with Laquatus's Champion.

Meanwhile Fujieda stole damage while he could, trading his best creatures for those Hashimoto threw out to block. Finally he drew into a backbreaker: Acorn Harvest. Hashimoto's lone remaining defender was the Angelic Wall. Fujieda didn't even need to show him the Overrun he had in hand.

The quickly got into the second game, and Hashimoto stalled on two lands. It wasn't a complete disaster, Fujieda didn't have any substantial attack force. Nevertheless he soon found Rabid Elephant to start smashing. Pyromania had done its job keeping his graveyard full and Hashimoto's board clean, so that when Hashimoto made a play to turn things around with Mystic Enforcer, Fujieda's Temporary Insanity took it and swung for the win.

Beast Attack had done a lot to help Kawaguchi murder Maki, though Maki did his best to disagree. Double Strength of Isolation, Hypochondria and Embolden kept things about even, but then Kawaguchi drew a second bomb: Narcissism. With surgical precision she dismantled Maki's defences, leaving him empty-handed while her 4/4's remained on the board. Soon it was over.

Meanwhile Muroga had gotten an early Torturer in play, and Fujita couldn't quite find his was past it. Things got a lot worse once Muroga found his Chamber of Manipulation. He had two Innocent Bloods in hand. Soon Fujita had no creatures on board.

Maki was up to his old tricks in the deciding match. Only this time he had an offensive weapon, too: Mystic Familiar with Strength of Isolation. He had it out early and brought Kawaguchi to single digits while he built his defences. Kawaguchi had four squirrels from Acorn Harvest, Dwarven Strike Force. She tapped seven and played Roar of the Wurm. Maki frowned.

He swung in the air to bring her to seven and passed it back. She Roared again. Maki chumped the first token with Patrol Hound. He counterattacked and brought her to five, and Concentrated. She made an Arrogant Wurm, then played Reckless Charge and swung in. Maki fell to eight, losing most of his force in the process.

Maki played his sixth land and triple-checked to see if he could get threshold for a quick aerial victory from Mystic Familiar and Mystic Zealot. When that option was unavailable, he hit Reset with Upheaval. He gave it back to Kawaguchi just before time was called.

She played forest. He played plains. She dropped Werebear. He dropped Mystic Familiar. She swung and he did not block. She looked at her hand again and realized she couldn't stop the Strength of Isolation hiding in Maki's hand. On the fifth extra turn, Maki played the Strength to win the game, forcing their match to be a draw.