Round 6: Nathan Russell vs. Dante Rosati 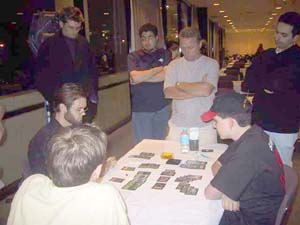 The final game of the top draft pod featured Dante Rosati and his R/B creature kill deck versus Nathan Russell and his U/G tempo deck. The two were playing off for the title of Nationals Draft Champion however it's a title that comes at a price. Two previous champions Russell Barlow and Dane Coltman have both managed to miss the top 8 after going undefeated after day one, so losing this match could be a blessing in disguise.

After a 10 minute deck check the two players began the showdown with Russell electing to play first. Rosati was the first player to play a spell with a Mesmeric Fiend locking out an Aether Burst. Russell then played a Elvish Lyrist and a turn later he was the first creature to taste the life of the opponent. Rosati stopped the Lyrist dead in its tracks by slamming down a Dirty Wererat and attacked back with his Fiend levelling the life totals at 19 each. Russell then played out a Possessed Centaur to which Rosati responded with a Zombie Assassin and again the board became a stalemate. A Balshan Griffon entered play but it swiftly was removed with a Patriarch's Desire. Rosati then seized the chance to go on the offensive sending in his Dirty Wererat, however before it could be blocked he put a regeneration shield on it discarding Fiery Temper with madness and removed the Centaur, crashing through for two damage. Russell attempted once again to stabilise the board with a Dreamwinder but Rosati was an unstoppable machine using Crippling Fatigue and then Flashing it back to once again clear the way for his Wererat. Figuring that now was a good a time as any Russell used his Moments Peace, as it had lost its surprise when it was seen by the Mesmeric Fiend. The next turn when the Wererat attacked Russell had another trick casting an Elephant Ambush instead of flashing back the Peace. 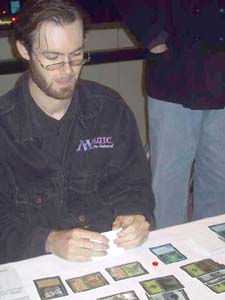 With the board once again in a locked down position Russell pulled a Rabid Elephant off the top bringing out cries of "Nice Rip" from his opponent. "That's all that's left now, fatties. Big Fatties" retorted Russell as he sent his elephant into the red zone. Rosati thought for a few seconds and decided that now was a good a time as any to use his Zombie Assassin so he took down the Elephant before it could do too much damage. Russell cast his second elephant ambush and then began to go on the offensive with his tokens. Rosati was up to the challenge and the two traded damage leaving the life totals at 9 to 10 in Rosatis favour. Rosati then pulled a GraveGouger off the top to lock down then Moments Peace sitting in the graveyard and it looked as though the match might be his when a turn later he dropped a Soul Scourge. When the two tokens entered the redzone again Rosati took the chance to kill one by double blocking with his Wererat and Gouger losing the Gouger in the process. Russell then drew and cast a Deep Analysis and after attacking he dropped an Aquamoeba and a LeafDancer which was enough to push through fatal damage on the next turn.

After a long and gruelling Game 1 the two quickly shuffled up and moved onto Game 2. A second turn Wild Mongrel from Russell only had one turn to attack before Rosati ripped an Innocent Blood off the top to remove it. The two then began to find land troubles with Rosati stalling on 3 land and Russell stalling on 4 land all of which were forests. The two still managed to play spells though with Rosati attacking with a Barbarian Lunatic and Russell blocking with an Elephant Ambush. Russell was the first player to play a land with the important island popping up in his next draw step allowing him to cast a Rabid Elephant. Rosati had the answer even though it wasn't a land he ripped another Innocent Blood off the top to deal with the monster. Russell was unphased and left his lands untapped for about 2 seconds before dropping a Metamorphic Worm. For the third straight time Rosati pulled an Innocent Blood off the top of his deck to deal with the danger. A Deep Analysis helped Russell to draw into more action but the only spell he could summon before ending that turn was a Elvish Lyrist. Rosati had the perfect answer once again when he cast an Afflict and it yielded another land, which he slammed down in triumph. After casting a peek at Rosati's hand Russell noted that he had no way to deal with the next threat, a Possessed Centaur and it came thumping down into play. Rosati had no direct answer and began to develop his own board with a Drity Wererat. An Aquamoeba and a Krosan Constrictor joined Russells team of men, but the Constrictor was met with a Ghastly Demise. A turn later a Crippling Fatigue and a Flame Burst dealt with the thresheld Centaur, and Russell used the flashback on the Analysis to dig deeper into his deck looking for more threats. His second Rabid Elephant looked perfect against Rosati, however an Acceptable Losses put an end to it. Russell kept dropping more men with a Hydromorph Guardian and Russell began to go on the offensive trading blows one for one with the Dirty Wererat. A flashed back Elephant Ambush was met with a peeled Fiery Temper and it really looked like it was not going to be Russell's game. Needing only to draw something to help press through the final point of damage Russell could draw only land for the last two turns and died to the Dirty Wererat. 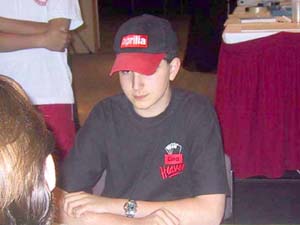 With time running out the two shuffled up and dealt their opening hands. Upon seeing his hand Russell offered the draw and Dante accepted without hesitation stating that the only way he could win a 5 minute game would be to tar Russell out.