Round 6: Neil Reeves vs. Alex Shvartsman 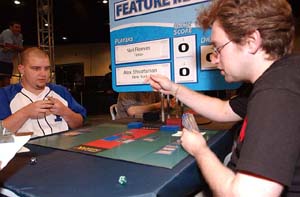 Despite both of these player's prodigious accomplishments neither has been a member of the US National team. Alex is in the middle of a resurgent year that has seen him balance winning a Grand Prix (with a little help from his friends) and running a successful game store.

Neil has been busy fulfilling his duties as the winner of the Event Horizons Invitational. The next Pro Tour will mark the debut of Courtney's Men—his Pro Tour team with Bob Maher Jr. and Dave Williams. Pundits are expecting big things from him this year as he has continued to perform well in almost every format.

"I thought I had the best set-up at the table. No one was drafting black FOUR players to my right. You know that black is ridiculous in Scourge, right? Instead this guy gets all the good black and I get nothing."

Neil turned to Alex, "Why couldn't you open a Timberwatch Elf?"

"I know but then I would have gotten the Timberwatch and I could have played green and gotten some use out of my Forgotten Ancient."

"You're not running him?!? If you didn't take him I would have."

"Maybe I'll side him in against you." 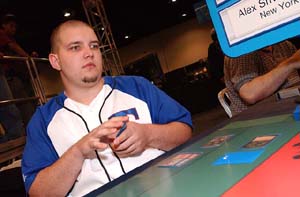 Neil was on the draw but had the first play—a Wretched Anurid. Alex cycled a Gempalm Polluter and began the work of whittling away Neil's life total. Death's-Head Buzzard ticked off a point when it came into play and Alex elected not to trade when Neil swung into it with the Anurid. Neil played a morph and sent the turn back.

Alex brought a frown to Neil's face with a face-up Crude Ramparts, "That guy is above average." Neil shrugged and sent his men into battle, "Let's get these guys in here." Alex thought for a moment and made a decision, "I'll be stupid and black you morph."

"Seems fair..." Neil flipped up his Aphetto Exterminator and they traded. Alex continued to send in with the Buzzard and Neil fell to twelve. A Nantuko Husk dropped him to eleven. Neil killed the Buzzard with a cycled Solar Blast and he played a Barren Moor obviously looking for some other type of land.

Crypt Sliver came down to hold the ground but Neil rendered the 1/1 useless with his Nefashu. Alex played a face-up Cutthroat but Neil had drawn the Wave of Indifference last turn and was able to swing in for the kill.

Neil continued to dissect the draft, "I was so set up for green—there just wasn't any. I thought I would get hooked up." He looked at the Forgotten Ancient in his board and chastised himself. "I cracked this guy and made the WORST mistake. I didn't think I would get any more red so I took him over Alex's Cutthroat. I just love the potential power of this guy—I still almost splashed him but my deck is too fast for a third color."

It did and Alex kept his next set of six but Neil had the first play, "Nice turn two play...Carrion Feeder." Alex came back with his cousin the Nantuko Husk and Neil played a morph. Crude Ramparts came down face-up again and Neil groaned. Bladewing Thrall came down on Neil's side and Alex played a 3/3 Aven Warhawk showing him a Dragonstalker—another 3/3 flier. Neil played a Sootfeather Flock and traded it with the Warhawk. 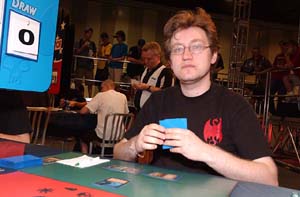 Alex was down to one card. "Could be a good one," said Alex. "Could be $%*#, too. But I think it might be the best," worried Neil. Once again the Exterminator ate the wall and Alex was without a defense. He played his last card, "All right it is the best, Havoc Demon."

Neil looked over the board and did some math. He made sure that Alex was out of cards and sent in his team. The Exterminator and the Husk traded, which gave Neil a clear path to play his hand full of creatures now that there was no easy way to sac the Demon.

Two turns and a Clutch of Undeath later, Neil was 5-1.