Round 6: Noah Boeken vs. Kai Budde 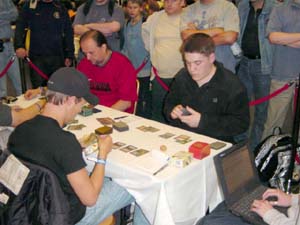 Noah won the roll to go first, chose to keep his hand and switched his baseball cap around backwards. Kai is playing 'dark domain' and Noah is with a black, red and blue control deck which features Pyre Zombie and Nightscape Familiar. By the time they were ready to start, they had already attracted a large feature match crowd.

Kai spent the early part of the game using Lay of the Land to start building his domain. Unfortunately for Noah, he was land light and was forced to start discarding cards. Kai could not seem to punish him as all Kai did was simply play land.

Noah pleaded with Kai "come on why don't you Armageddon me?", as he only had non-basic lands in play. Kai just sighed and said that he would certainly like to be able to do that but couldn't. Kai tried to draw five cards with Allied Strategies, but that was met by Undermine. This allowed Kai to slip a Destructive Flow onto the table which looks like it would wreck Noah who only has one basic land out of his five total.

While Kai was tapped out Noah had the opportunity to make a Nightscape Familiar and Lobotomy Kai for two of his Collective Restraints. Kai just nodded but drew Legacy Weapon from the top of his deck to the amusement of the gathered crowd. Noah asked to read the card and had nothing else to do but Void for seven to get rid of the Weapon. Noah sighed, pointed to the Destructive Flow and asked "who plays with this rubbish?"

Noah played a couple of Fact or Fictions getting him back into the game by giving him basic lands. Kai seemed to be drawing nothing but Lay of the Land and Chromatic Spheres. Kai tried to cast Allied Strategies as a last resort but Noah has main deck Gainsay and counters it! Kai goes to one life and is burnt out with Fire, which is met by a shrug.

Both players seemed to realize that time was against them and started to play faster. Kai played Void and chose two as the number taking three (!) of Noah's Gainsays, revealing Urza's Rage and lands. Next turn, Kai cast Legacy Weapon and was then playing very fast, much different to earlier on in the match and Kai started removing Noah's basic lands from the game.

Noah asked Kai to just kill him but all Kai can do is make an Overgrown Estate. He searched frantically with Worldly Council and then cast Allied Strategies, desperately looking for a win condition.

Noah's last land was removed from the game and Kai cast Ordered Migration. Noah won't concede and forces Kai to actually kill him. Noah picked up Kai's graveyard to look through it and Kai called for a judge to watch the game for slow play. Noah protested that he was just looking and Kai pointed out that there's no way that he could possibly win. Kai killed him a few turns later with the bird tokens. 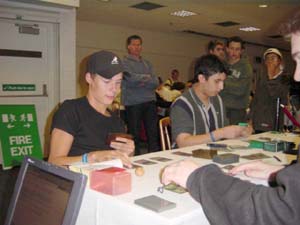 Kai had to mulligan in the third game but elected to keep his six card hand. Kai started slowly by building up his different basic lands, while Noah didn't do anything except lay land. Kai played Destructive Flow, with enough mana left open for Evasive Action. Kai put Flow on the stack and Noah asks to wait, Kai raises his arms at the judge in protestation and Noah asks "What? You want me to say yes?"

Noah responded with Fact or Fiction, which revealed little of consequence except the basic land which Noah needed. Noah played carefully, slowly tapping his land for Recoil (on Destructive Flow). Noah then showed Kai which land he was sacrificing and paused to write the life score down as twenty.

Kai played Goblin Trenches, which only had Noah's Nightscape Familiar to contend with and started sacrificing lands to make goblin tokens and attack. Kai played Allied Strategies, Noah asked how many cards are in Kai's hand and then looks in his graveyard.

The crowd around the table is huge now. Noah tries for a Void for zero that kills all the goblin tokens in play, but Kai simply made lots more at the end of the turn and Noah conceded. Just as they started sweeping up their cards, time was called.