Round 6: Noah Boeken vs. Raphael Levy 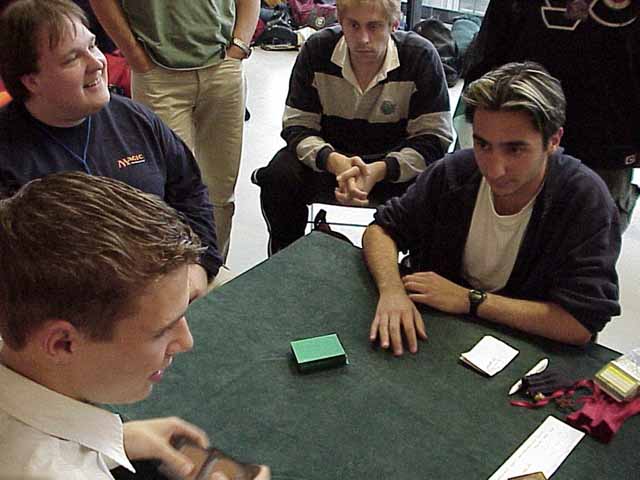 Before the match, Noah Boeken turned to me and said, "Did you hear what he said? He said 'Shall we roll a die?' Didn't he learn anything from Copenhagen?!" Boeken teasing Raphael Levy about his ejection from Grand Prix Copenhagen set the tone for a fun, and friendly feature match. Both players had perfect 5-0 records going into this round and were each hoping to carry undefeated records into Saturday. click here to read about Levy's draft.

Boeken eventually won the opening die roll and elected go first. He played a turn 2 Defiant Falcon and Levy had an Island in play but decided not to use his Daze. Instead Levy played out Spiketail Hatchling, Balloon Peddler, and then Stinging Barrier. The Barrier did kill that Falcon, but not before Boeken could recruit Defiant Vanguard out of his deck. Boeken then played Enslaved Horror, which was too big for Levy to deal with. When the Vanguard then got another Vanguard and Boeken then played Troubled Healer, Levy just shook his head. Levy would have had trouble dealing with the 4/4 Enslaved Horror even if Boeken hadn't had Troubled Healer. When Boeken caught Levy with no cards in his hand and played Rackling, Levy just scooped.

Game 2 was a contrast in mana problems. Levy couldn't draw any while Boeken couldn't draw anything but land. Boeken played out 9 land and did his best to apply pressure with Agent of Shauku and Troubled Healer. When Levy finally drew a 4th land (on turn 11, I believe), he announced "So game!" and dropped Stinging Barrier. Nope - not game - Boeken had Vendetta in his hand. Boeken then drew a Vanguard and started building up a swarm. Boeken used Ramosian Rally to deal some damage and killed a Laccolith Grunt. On successive turns Levy then bounced the Troubled Healer, played out Laccolith Titan and surprised Boeken with a really good Rupture. Boeken had declined to recast his Troubled Healer because he was playing around Daze and Withdraw the whole game (both of which Levy did indeed have in his hand), but he might have been better off playing the Healer instead of a Fen Stalker.

After Levy swept the board with that Rupture, the game was stalemated. However, Boeken promptly drew Wishmonger off the top and Levy was so low on life that the Wishmonger got activated twice and then just attacked and killed him.