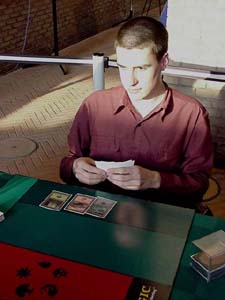 This is the fourth time these two have played each other. Olivier Ruel, fresh off a second place finish in Pro Tour-Osaka and a top 8 in Grand Prix Barcelona, is currently 2-1 up. Dutchman Jelger Wiegersma is also having a good year so far, following a top 8 finish in New Orleans with multiple Grand Prix top 8's. They are both 5-0 in this tournament and playing predominantly red-black. Wiegersma is splashing green for Roar of the Wurm while Ruel has blue for Breakthrough.

Ruel started first and began beats with a Gravegouger. Nothing much happened until Wiegersma tried to bring in Mirari. Ruel didn't think long before countering it with Circular Logic.

Wiegersma then summoned in a Soul Scourge to block the Gravegouger as he had a second one to follow it. Ruel started counting down its extinction with Bomb Squad.

Mesmeric Fiend revealed a monstrous removal-heavy hand for Ruel so Wiegersma didn't waste any time hanging around. A Puppeteer died to Ghastly Demise and Crackling Club took care of the Bomb Squad. He then sucked under a Zombie Assassin with a Butcher.

Morbid Hunger retrieved the Assassin for Ruel and then he refilled his hand with Breakthrough.

Wiegersma was still swinging with the Soul Scourge and then added a Pardic Collaborator to pose a headache for Ruel.

Ruel summoned a Barbarian Lunatic and used it to block the Collaborator and get his Firebolt back. Too late though as the Scourge had dropped Ruel to four life and Wiegersma had a Firebolt to end the game right there. 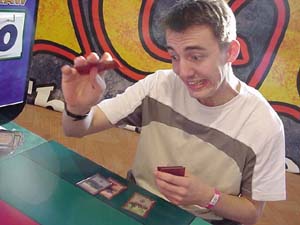 Wiegersma sideboarded in Acorn Harvest and an extra Forest to give him more creatures with which to assault Ruel's removal.

Ruel chose to go second and was in trouble immediately when he had to mulligan twice. His hand wasn't too bad as he was able to summon a turn 3 Gravegouger and turn 4 Bomb Squad.

Ruel didn't draw an answer to the Painbringer and the Bomb Squad went to the graveyard before they could explode it.

Wiegersma summoned a Soul Scourge and started to race Ruel's Whispering Shade, with help from a Zombie Assassin and the still-present Gravegouger.

Ruel brought in Aven Fisher and Puppeteer and with both players on six life Wiegersma swung with everything but the Painbringer. Ruel chose to chump with the Puppeteer in the hope he could attack back for the win. Unfortunately Wiegersma summoned a Fledgling Imp with which to block the Aven Fisher and Ruel didn't draw anything to remove it.