Round 6:
One Step Ahead

ri Peleg of Israel has defeated Italy's Samuele Estratti 2-0 in a very one-sided Round 6 affair.

Peleg, the 2007 Magic: the Gathering World Champion, opted for an unconventional variation of the control decks available in Return to Ravnica Block Constructed. Eschewing the powerful options offered by black and red, Peleg chose to run the simple and straightforward Azorius Control, and his decision was certainly paying off. His victory over 2011 Pro Tour Philadelphia-winner Estratti's more popular UWR Control deck was his third consecutive in the Constructed portion of the tournament, bumping him up to a perfect 6-0. 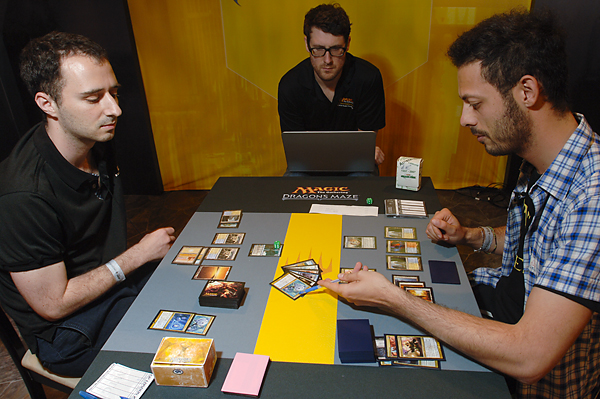 Samuele Estratti may be sporting one of the most popular three-color control combinations of the tournament, but Uri Peleg's Azorius Control sported three copies that were a nightmare for control decks: the very difficult to deal with Ætherling.

"This is the best start I've ever had at a tournament," Peleg said with a smile as he finished up his match.

While other control on control matchups that we've seen this weekend have been arduous, drawn-out affairs, Peleg was able to take care of Estratti in very short order, owing equally to Estratti's draws and Peleg's own choice of threats. Game 1 began in typical fashion, with both players attempting to make all of their land drops, sculpting their hands for the ultimate showdown. Eventually, Estratti got a glimpse of his eventual doom when he cast a Sin Collector to hit Peleg's hand. While writing down Peleg's hand, he took careful note of the Ætherling Peleg was eager to unleash upon him. With no permission in his hand, Estratti was unable to deal with the massive, ridiculously hard-to-kill shapeshifter, and it took a mere three turns for the Ætherling to finish him off.

"I have no answer for that card once it hits play," Estratti solemnly told me after the match. 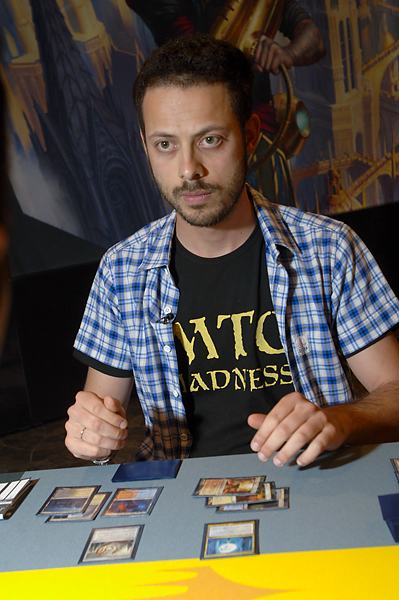 "There is no answer to that card." -- Estratti, discussing the difficulty of dealing with a resolved Ætherling.

Peleg's variation on control was running a trio of Ætherlings, while most of the other control-heavy field was only running one or perhaps two. As important as the card is in the control matchups, this gave Peleg a huge advantage in the mirrors, at least in Game 1.

"There are no good answers to that card in the format," he told me after the match. "The only real ways to deal with it are to either counter it or to play yours first. That's why we're running three of them."

While Ætherling may have been the star of the first game, the second came down to his other threat of choice: Precinct Captain. A stud against both control and another major threat of Return to Ravnica Block Constructed, Mono-Red Aggro, Peleg's Captain came down fast and hit hard. Estratti's deck has enough ways to deal with an early Precinct Captain that he should have been reasonably alright, but his deck was not kind to him. After stalling on lands for a turn, he proceeded to draw land after land after a pair of Precinct Captains set about filling up Peleg's side of the table. Estratti's one saving grace, Supreme Verdict, was sitting impotently in the sideboard. Since Peleg's creatures were only the Captains and Ætherlings, the latter of which can't easily be killed by Verdict, benching the powerful sorcery was certainly the right call. Unfortunately, it left him unable to do anything but watch as his lands provided him no way of getting himself out of his dire situation, and he succumbed to Peleg's tide of 1/1s. 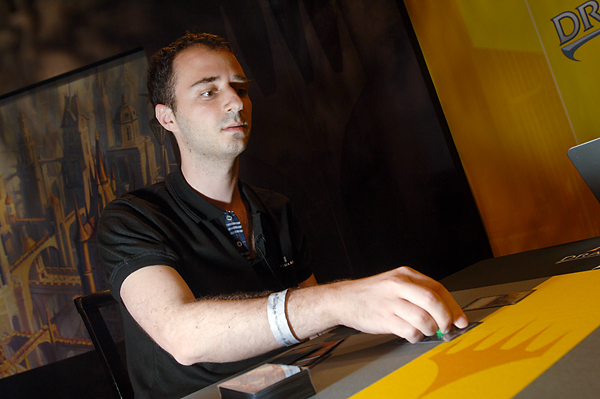 After the game, Estratti thumbed through his sideboard cards with Peleg, revealing Far & Away, Counterflux, and Slaughter Games, all incredible cards in this matchup. Peleg sympathized with his friend's poor luck and wished him better in his future matchups.

"I think I definitely have the advantage in this matchup in Game 1," he told me. "But it gets much worse for me after sideboarding, especially because of Slaughter Games. All he has to do is name Ætherling and it gets very difficult for me to win."