Round 6: Outland vs. Antarctica 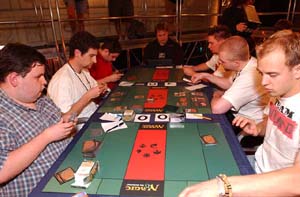 There are a lot of good teams at 3-2 and some good players are going to be disappointed as loss #3 eliminates them from the tournament. With 142 teams of 3 players each, this is the largest Pro Tour of all time and no matter what your little coach may have told you, not everyone can be a winner.

Two of the teams with their back against the wall met in a round 6 feature match when Antarctica (Steve OMS, Jon Finkel, and Dan OMS) took on Team Outland (Bjorn Jocumsen, Nicolai Herzog, Eivind Nitter). Antarctica has a team PT Top 4 and a GP win on their resume while Oslo, Norway based Outland finished 5th at last year's team PT.

Dan O had to mulligan down to just five cards and then still stopped at two lands. He was barely able to play a spell before he was dead. That just cancelled out with Nitter's mana-screw (also post-mulligan) that handed Steve O a quick game 1.

The middle match was a lot more interesting. Herzog put Squee's Embrace on a Dega Disciple and dealt damage so quickly that Finkel had to sacrifice a Tinder Farm to bust out turn 5 Rith even though it meant he couldn't cast the other expensive spells on his hand. Rith had to play defense because Herzog was shutting down Finkel's only green mana with his Slimy Kavu. Eventually, Finkel drew a Jilt, couldn't kick it, but bouncing Slimy Kavu for a turn was good enough to let him play Lay of Land, get a second forest, and start the parade of Saprolings into play. Herzog did an amazing job of recovering - he drew a Plague Spores to take out Rith and then Breath of Darigaaz without the kicker took out all 7 Saprolings that had made it into play. One Pouncing Kavu later, Herzog won the slug-fest. 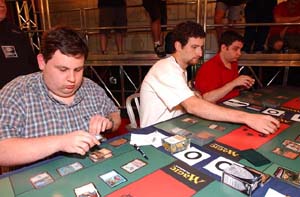 Herzog played another early Squee's Embrace (this one on Angelfire Crusader) and Finkel once again found his life total under serious pressure. Finkel wasn't helped by the glut of land he had drawn. Herzog saved his 4/5 Crusader from Finkel's attempt to kill it by blocking with and then sacrificing a Savage Gorilla because Herzog had Captain's Maneuver. Not only was the Crusader still alive, but now Finkel was down a Yavimaya Barbarian. One Agonizing Demise later, Finkel was down and out - Herzog claimed the match 2-0 on behalf of team Outland.

Dan O and Jocumsen were trading damage fairly evenly during their own second game, but then Dan played Tsabo Tavoc. Not only was Jocumsen facing down a 7/4 first striker, but now his Nemata was trapped in his hand! Dan put him out of his misery quickly with a Ghitu Fire and they were on to game 3.

Steve O came out aggressively in game 2, but Nitter slowed him down with a pair of Recoils (the second of which sent Silver Drake to the graveyard) and then Vodalian Serpent forced his Voice of All (set to blue) to play defense. Steve's hand was empty and Nitter Probed to look for a way to bust through, but he couldn't find any way to press his advantage. Soon Steve had drawn into a second Silver Drake and then a Sawtooth Loon. The Loon allowed Steve to dig into is deck for good cards while cycling lands to the bottom. Nitter could not deal with all the fliers Steve found and suddenly the overall match was all square. 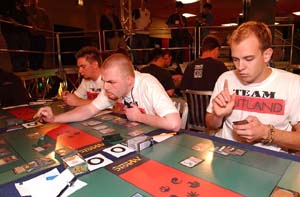 Everything came down to the third game between Jocumsen and Dan OMS. They traded creatures for a few turns and then Dan sacrificed Morgue Toad to bust out a turn 5 Tsabo Tavoc! Jocumsen had the answer: Rushing River sent Tsabo home for at least a turn and provided Jocumsen with the possibility of playing Nemata, but Dan used Hypnotic Cloud to clear out Jocumsen's hand (which had Nemata). Jocumsen did have board advantage, though, and continued beating down with Amphibious Kavu and Living Airship. Dan had his second Terminate ready to take out the Airship, but he didn't have the land to replay Tsabo and Jocumsen kept drawing creatures off the top - first Nomadic Elf and then Thornscape Apprentice. The tapper could have sent Antarctica home, but Dan had spectacular sideboard technology ready: Juntu Stakes. Jocumsen answered back with yet another potential knockout punch: Obsidian Acolyte. Dan had no choice but to hope Jocumsen missed the fact that Nomadic Elf gave Jocumsen one more white mana than was obvious and so Dan tried double-blocking an Amphibious Kavu with two black creatures. They both went to the graveyard while Dan's brother Steve looked on and just shook his head, knowing that Dan had no choice, but disappointed that Jocumsen saw it. Dan's Halam Djinn gave him one red blocker, but it just wasn't enough.