Round 6: Poison in the Well

oth teams entered the round undefeated at 5-0. They emerged victorious from the first half of the top-seeded draft pod. In the previous round, Hall of Famer Dave Humpherys and New York Magic staple Steve Sadin's opponents tried to slow down Sadin's Giant Dustwasp by enchanting it with Leaden Fists. Sadin calmly re-enchanted his Giant Dustwasp with Second Wind and untapped the flying insect to attack at 6/6… courtesy of his opponent's Leaden Fists. Quite a nasty counterattack. 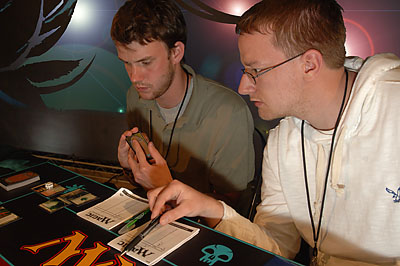 Chris Lachmann and Jacob van Lunen focused intently on Slivers during the draft.

In the previous round on the other side of the draft pod, relative newcomers Chris Lachmann and Jacob van Lunen ran over fan favorites Finkel/Ravitz by delivering 10 fatal poison counters, courtesy of two Virulent Slivers and lots of Sliver friends. Lachmann and van Lunen cornered the Sliver market during the draft, and Lachmann brought white-blue Slivers to the table, while van Lunen ran the red-green Sliver stable.

Lachmann/van Lunen won the toss and opened with a terrifying turn-two Sinew Sliver, turn-two Virulent Sliver. This game threatened to get ugly quickly. After suspending a turn-one Shade of Trokair, Humpherys' white-black Rebel-tinged deck answered with the Slivers with Errant Doomsayer. The little tapper could contain the Slivers individually, but couldn't stop their global abilities. Lachmann made a morph, and both Slivers slithered in, bringing the score to 30-26 (+2P). Van Lunen's lands stopped at Forest, Forest, Fungal Reaches, and he spent his mana charging the storage land.

Sadin gave the Sinew Sliver a fatal Erratic Mutation on his third turn, eliminating the more powerful sliver threat… or was it? Would Virulent Sliver actually turn out to be the most dangerous game?

Lachmann's morph scored a hit, while van Lunen struggled to build his mana base. The sliver threat was at bay, at least for the moment. Sadin fished with Careful Consideration, discarding two deliciously extraneous Forests. Humpherys manifested Shade of Trokair and hardcast a Witch Hunter, which was quickly made as Dead as Dead // Gone could make it.

Van Lunen had a grip of mana-hungry power, with Jolrael Empress of Beasts, Akroma's Memorial, Sprout Swarm and Two-Headed Sliver, but no mana to play it. Amazingly, he topdecked the best card he could possibly pull: Gemhide Sliver, providing two Mox Diamonds with the help of Virulent Sliver, and making another two-headed Mox Diamond and a land from the hand on the following turn. Lachmann developed more smoothly with an on-time Lymph Sliver, followed by a Synchronous Sliver.

Seeing the Sliver threat building again, Team Sadin/Humpherys deployed Nessian Courser, a suspended Giant Dustwasp, and a Castle Raptors. Individually, their cards were far more powerful than each Sliver, but the Slivers' collective arsenal of abilities was starting to grow. Castle Raptors dealt 3, and Sadin faced a choice: Tap out to hardcast a second Giant Dustwasp, or leave mana up for Logic Knot, hoping to nab the key spell? Sadin and Humpherys both stayed untapped, sending the turn back with an intimidating eleven mana up and about eight cards in their hands.

Lachmann made another Synchronous Sliver, growing a team of absorbing, two-headed, vigilant, mana-producing Slivers itching for more abilities. Sadin and Humpherys needed to get the job done with 3/3 fliers before these Slivers grew totally out of control.

On turn seven, van Lunen pulled a fifth land and made Jolrael, Empress of Beasts. Even with Gemhide Sliver though, van Lunen couldn't quite pay the bajillion extra mana for Jolrael that Sadin demands with Logic Knot. Looks like Sadin guessed right.

Now that Sadin's Logic Knot was gone, he hardcast his other Giant Dustwasp, leaving up two mana. The Hump built the air force further with Knight of Sursi. 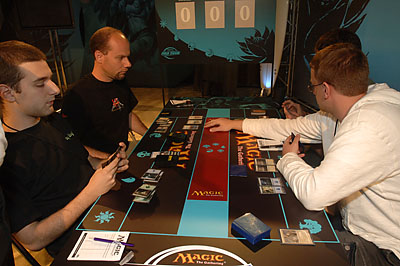 After long waiting, van Lunen finally reached the promise of his opening hand and announced Akroma's Memorial! Sadin and Humpherys murmured and said "Yeah, sure." As crazy as all the Memorial's abilities were, they only helped van Lunen's two 1/1 Gemhide and Two-Headed Slivers, leaving all the 3/3s out to dry. The Sinew Sliver that Lachmann announced on the same turn was a different story though, leading out a "Delay" from Sadin that Sadin had calmly palmed when the Memorial was announced earlier that same turn. A lot of people would panic at the Memorial and counter it immediately, but Sadin and Humpherys correctly identified that the Memorial was not a major threat. Lachmann finished with Tivadar of Thorn, who was hungry for targets but failed to find any.

Hump and Sadin sent over Giant Dustwasp and Castle Raptors and brought the Sliver players to 21. Malach of the Dawn and Herd Gnarr joined the party.

Then the Slivers finally hit critical mass: Venser's Sliver came out came out for van Lunen, followed by…a second Virulent Sliver! Both had haste and flying from Akroma's Memorial, and all eight slivers had the two-headed ability. All eight slivers charged the red zone. Because of the humble Two-Headed Sliver, only four slivers could be blocked total. Because of the two Virulent Slivers, those four slivers dealt 8 more Poison counters, dealing another death by poison, and victory for Lachmann and van Lunen.

Lachmann and van Lunen both say hi and send their love to their Moms and Dads. (Awww...)