Round 6: Randy Wright vs. Chris Pait 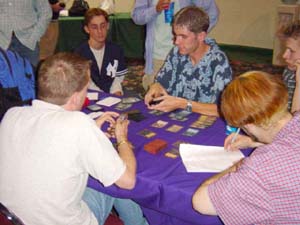 This feature match had a definite local flair to it. Randy Wright a player from Columbus, Ohio was packing his Wake Combo deck. Having been on the Pro Tour several times before, Randy was hoping that this three color special packing Time Stretch, Living Wish, Mirari's Wake, and Cunning Wish to get all of his kill mechanics would bring him back to the lights of the Tour once more.

His opponent, Chris Pait, from Toledo, Ohio was with a very different deck. Packing a mono-black Braids strategy, he plans to disrupt his opponent's early game, and seal the victory with the Cabal Minion herself. Chris has only been to a team Pro Tour, but he wants to go back, and shares the hope of so many in this room to earn an invite this weekend.

Randy called the coin flip and it landed in Chris's favor. Both players kept their opening hands, and Chris blasted out of the gate with a swamp. Randy answered back with an island, and passed the turn. Chris hoping to start the pressure makes a Nantuko Shade. Randy simply laid an island (which was something he would do a lot of during the early game), and passed it back. Chris tried to toss some more elbows Randy's way, but a Mesmeric Fiend got Syncopated, and his attack phase only knocked three points off Randy's life total. Randy played his first non-island land in a forest, and cast Concentrate. At this point, Chris was needing to rip a fourth land off the top of his deck. His Shade was Aether Bursted, recast, and he seemed to be losing confidence in his deck. Pleading with the pile of cards, he wished, wanted, and begged for the land that would let him cast one of the several Braids he had in his hand. It was not to be.

Randy took his next turn, played a plains, and cast Mirari's Wake. The end seemed to be near for Chris, but he still had a little bit of fight left in him. The Nantuko shade came across the table and knocked Randy down to a scary low life total of four. Of course, one of the key cards in this Wake Combo deck is Solitary Confinement, and Randy was at the ready with it next turn. Unable to deal lethal damage to him, Chris drew his card per turn, and had to start discarding. Ichorid was first in the bin. However, with the enchantment out, and no other creatures in the graveyard, the recursive critter was unable to do much of anything.

Wright cast Flash of Insight for six at the end of Chris's turn, untapped discarded Syncopate to the Confinement and flashbacked the Insight for another six. Chris finally got his fourth land of the game on the tenth turn, cast a Braids, but returned the dementia summoner to his hand when Randy flashed Aether Burst. 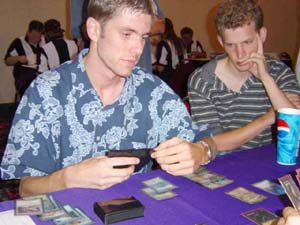 When the upkeep on Solitary Confinement was not paid, it was apparent the game was in the end stages. Wright played Time Stretch, targeted himself, and Living Wished a Battlefield Scrounger into his hand.

When the combo of Scrounger and recurring Time Stretch was explained, Chris packed his cards in.

Game 2 started off with Randy taking a mulligan to six, and Chris pleased with his golden hand of seven. After playing a land and passing, Wright played a Krosan Verge and passed back. Chris made a land, and was delighted to see Randy make an island. Making another land, Chris attempted Rancid Earth on the krosan verge, as this move hoped to show Randy as a land hosed opponent. The Rancid Earth resolved and the look of uncertainty moved across the face of the Ohio State Champion. Randy made no land, and passed, sitting on one Island.

Chris made a fourth turn Shambling Swarm and passed. Knowing that he narrowly averted disaster kept hope alive for Wright as he made a forest and Compulsion. Ichorid joined Chris's team, and both members of his army marched over to meet Randy. Randy played an island and passed the turn. Chris attacked with his Swarm knocking the defenseless Wright to 11, and made a Braids. Braids was quickly Aether Bursted back to it's owner's hand, but when Randy had to Living Wish for a Skycloud Expanse, it seemed all in the bag. Another attack from Chris brought Wright to eight, and Braids once again came into play, and returned to her owner's hand via Aether Burst. 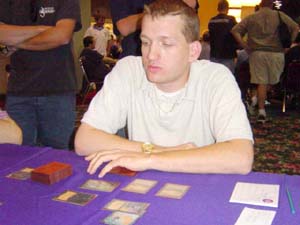 Randy untapped, drew a Solitary Confinement, and used it as a stop gap measure to slow down Chris. At this point, Randy was at a terrifying four life. The lack of good cards in his hand made him give it up a few turns later. Chris played a land, cast Mesmeric Fiend, and saw that there was nothing good in Randy's hand. Ichorid came into play, and dealt the killing blow.

Both players kept their current configuration, and after a mulligan from Chris, the game was underway.

Sadly, the mulligan proved to be too much of a hurdle for Chris to get past. He had no other disruption past a second turn Mesmeric Fiend, and watched in agony as Randy was able to cast Wake on turn four. A turn five time stretch was followed by a Mirari, which was followed by a Living Wish for Ambassador Laquatus. The Ambassador came into play the next turn, and Randy was able to fork the second Time stretch in his hand, which allowed him to take the next four turns in the match. It was all over but the math as Laquatus was more then enough to remove all of Chris's deck.