Round 6: Raphaël Lévy vs. Svend Geertsen 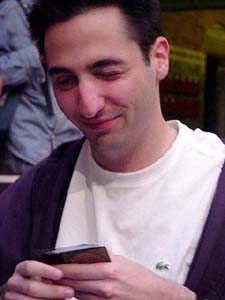 It's a bit strange calling someone in their twenties an "old timer" but Lévy and Geertsen have been around, with a great deal of success, for a very long time. Some might remember Svend best as the young kid who took Stompy to the 1997 Worlds Top 8, bringing the Green Machine to the biggest spotlight. He came back to Top 8 very recently with his excellent performance at Pro Tour-Nice this year.

Raphaël Lévy won a Grand Prix before many of the players here today even started playing the game, way back in 1998 in Lyon. Since then he has kept a very regular Pro Tour career and his one of the first names people always mentioned when you talk about French Magic.

A second turn Fiend from Svend started the friendly ribbing:

Svend: "You kept this hand? Are you crazy?"

He was looking at a second Mountain, Cabal Torturer, Rotting Giant, Treacherous Vampire, two Barbarian Outcasts and Nantuko Shade. It took Geertsen a very long time to pick the cards, despite the fact that at that point Raphaël couldn't safely play ANY of his spells. He finally settled on Barbarian Bully.

A Reckless Charge made the Outcast particularly big and the Danish decided not to trade creatures going down to thirteen. On the next turn he played Lost in Thoughts on Rotting Giant and dropped Cabal Torturer.

A Swelter took out Torturer before I could do any damage and the Imp and Outcast traded as the Frenchman felt to six. But he had his hand full while Svend down to one card in hand.

In came Treacherous Vampire to help Lévy rule the table. The Vampire started swinging and Raphaël added Treacherous Werewolf to the mix. Afflict ate up the Fiend, releasing the Bully, before Lévy played Book Burning.

Svend: "I have no idea what that does."

He read it and allowed it to resolve. Now with Threshold the "treachery" creatures reached massive size and Geertsen was in full "despair" mode. He used another Mesmeric Fiend to see a bit more of Lévy's deck before conceding.

Svend came out with the target of Lévy´s mockery: Cabal Trainee. Despite the jokes the Trainee pinged twice before Raphaël stopped it with Treacherous Werewolf.

The Danish took the fight to the air with Possessed Aven before dropping Lost in Thoughts on the Werewolf. A few free swings later Lévy pulled his first Mountain getting a fake grunt from Geertsen. After much deliberation the Frenchman settled for a Crackling Club.

The Aven, also known as Pyschatog-Killer, took another swing before Svend Geertsen got downright nasty: Rancid Earth on the Mountain. Lévy shook his head and slumped a little further down his chair.

At seven he needed some help very fast, as the Aven could finish him in three turns. On the next swing Afflict made the Aven a little less tough and the Club ate up the Trainee. 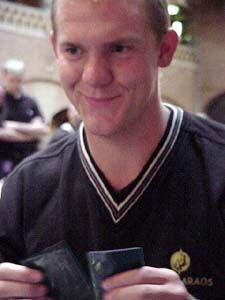 Still locked at three Swamps, and discarding Lévy looked ready to concede a few turns later after the arrival of Chainer, Dementia Mater. But he found a Mountain at the top of his deck and forced Geertsen to ponder his final swing very carefully, expecting some sort of trick.

To make sure things happen like he expected Geertsen used Repel to bounce the Werewolf and the Mountain. The disgruntled Lévy scooped.

With twenty-two minutes on the clock they traded a few jokes while shuffling. This time Raphaël came out faster with a second turn Rotting Gant while Svend continued his "voyeur" trend with another Mesmeric Fiend.

This time he saw Temporal Insanity, Anger, Swelter and Barbarian Bully along with a third land. He took Swelter and in came the Bully followed by Anger. Cabal Torturer and Afflict took out the Bully in a attempt to slow down the Frenchman.

After much deliberation Raphaël replaced the casualty with Dirty Wererat while Geertsen took to the skies with Childhood Horror befor locking the Wererat wth Lost in Thoughts.

With the ground locked the only action came from the free-swinging Horror that kept nibbling away at Lévy's life total. Raphaël tried to retaliate with Anger but Geertsen managed to trade it for Cabal Trainee.

On the next swing the Fledging Imp came along with the Horror. When Lévy tried to steal the Torturer with Temporal Insanity, Geertsen made it commit "hara-kiri".

Lava Dart killed the Fiend, freeing the Swelter that took out the remaining creatures. In two turns Raphaël Lévy had swept his opponent side and was now attacking at full swing.

Svend used Morbid Hunger on the Giant to slow things down but Lévy came right back with Treacherous Vampire. It was the Danish's turn to think things through very carefully.

Despite flashbacking the Hunger, promptly denied by Engulfing Flames, on the Torturer, Svend had no choice but to extent his hand. That two turns of Red spells were the decisive moment of the game.