This may have been the World Championships, but the final round of Standard was all Cali, baby. Travel about 50 miles southeast of San Francisco and you'll hit San Jose, home of former US National Champion Josh Utter-Leyton. As one of the higher profile, and longest-tenured, members of team ChannelFireball, the quiet and oft unassuming Utter-Leyton is backed by one of the most powerful collaborations of Magic players of the modern era. And don't let his demeanor fool you. Utter-Leyton is one of the latest in a long line of silent assassins, content to let his cardboard do the talking. And talk it has. In addition to tearing up the leader-boards at virtually every event he enters, he has rocketed off to a wonderful 4-1 start, looking to avenge his performance last year, where he fell just short of making Top 8.

Across the table from him, and from 90 miles northeast of San Fran, Shahar Shenhar is coming off a fantastic week. After starting the year strong with a 38th place finish at Pro Tour Paris, he slipped dramatically in Nagoya, and then failed to make Pro Tour Philadelphia. Then, out of the blue, he stormed back, drafting incredibly well to take home the title at Grand Prix San Diego just a week ago. Now, he finds himself performing admirably yet again, setting the stage for what I'm sure will be a great day for him tomorrow. 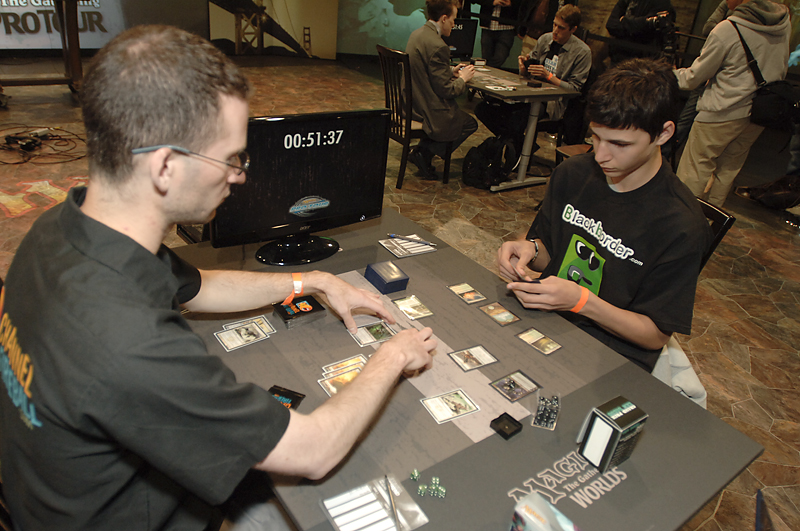 Two opponents: one North, one South, both a little East of San Francisco.

As Tempered Steel tends to do, Utter-Leyton vomited machines onto the table, dumping a Vault Skirge, Memnite, Signal Pest, and Glint Hawk into play over the first two turns. Shenhar's Green-White Tokens deck, capable of a healthy amount of expectoration itself, started exactly as he'd like, using a first-turn Avacyn's Pilgrim to set up a Mortarpod on his next turn. The Mortarpod made quick work of Utter-Leyton's Signal Pest, threatening to take apart the rest of his team in short order lest an answer be found.

An answer was needed, and an answer was in hand. Tempered Steel gave his creatures enough toughness to survive the Mortarpod and enough power to bash Shenhar down to 10. The Sacramento native tried to fight back, as he fought a Glint Hawk with Garruk Relentless and filled up his ground with Geist-Honored Monk. Utter-Leyton was not amused. Another Memnite and an Origin Spellbomb made two more 3/3s to deal with. Shenhar had a second Garruk to help things, but Utter-Leyton just ignored it, content to just finish things. A Dispatch ate the Monk, and the ensuing swing dropped Shenhar to one. Left with merely a Garruk in play, Shenhar made a second Mortarpod, used Garruk to make a Wolf, and played a Tumble Magnet. Utter-Leyton thought for a moment about his attacks before sending enough damage to kill Garruk and Shenhar simultaneously. Obviously, Shenhar chose to save himself, and the planeswalker ate the unfortunate end of that catch-22. It only took one more draw step for Shenhar to concede. Only ten minutes had come off the clock.

Surely there were answers to the metallic minions of the Tempered Steel deck lurking in Shenhar's sideboard. If nothing else, having more creature removal in his sideboard should allow him to save his Oblivion Rings for the right targets. With Mortarpod in the deck, the game really comes down to the Tempered Steel deck's namesake and Shenhar's ability to deal with it. Without it, most of Utter-Leyton's team would be easily manageable by the removal suite of Shenhar's Token Town deck.

Utter-Leyton began the second game with a mulligan. More than content with his opening draw, Shenhar once again started off with the all-important first-turn mana critter, this time a Birds of Paradise. Just as in the first game, Utter-Leyton fired out with a Glint Hawk and a Memnite on the first turn, immediately putting the screws to Shenhar. Shenhar clogged up the ground, ramping into a Blade Splicer and a Garruk Relentless. Shenhar attacked with his team on the following turn before using his Garruk to eat Utter-Leyton's Glint Hawk. Unfortunately, this decision left him with no blockers to protect the planeswalker, causing Garruk to drop to a Memnite's attack immediately thereafter. 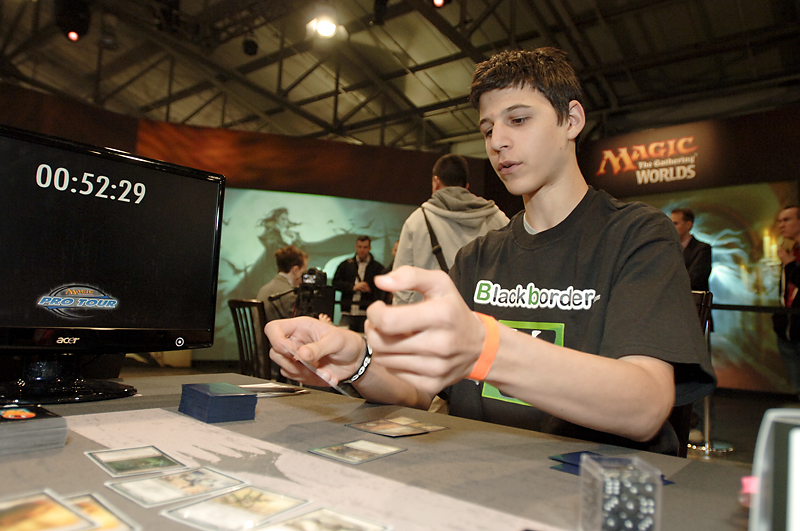 Despite a brief stumble, Shahar Shenhar manages to bring the match to a third game.

Shenhar kept adding to his team, making a Hero of Bladehold to sit opposite Utter-Leyton's Etched Champion. After an attack for 2, Utter-Leyton used a Dispatch to deal with the Hero, keeping things moving forward at a breakneck pace. Both players were playing incredibly fast at this point, apparently not aware that they still had forty minutes left in the round. Obviously, as soon as I typed that, Utter-Leyton slowed down to think. Shenhar had just replayed Hero of Bladehold, which threatened to quickly end the game. After some thought, Utter-Leyton played a Tempered Steel, attacked for 4 with his Glint Hawk Idol, and passed the turn, content to come out ahead on the Hero v. Champion fight should Shenhar propose it. Unfortunately, death came in the form of Gavony Township, ensuring that the mass of creatures in play would be able to finish the job before Utter-Leyton finished him.

"I played really bad that game," Shenhar admitted to Utter-Leyton after the game.

"I dunno. It looked like you just played spells and attacked with your creatures," Utter-Leyton responded with a shrug.

"Yeah, but the turn I attacked with the Splicer and the Golem and then played Garruk..."

For the final game of the Standard rounds, Shenhar once again had the ideal start against Utter-Leyton's deck: first-turn Birds of Paradise, second-turn Mortarpod. It was especially good considering the relative slowness of Utter-Leyton's start. All he managed this game was to crawl into a first-turn Memnite and a second-turn attacking Inkmoth Nexus. When he curved that into a third-turn Etched Champion, not yet in metalcraft, Shenhar used Garruk Relentless to eat it.

This time around, when Memnite tried to finish Garruk off, Shenhar protected him with the Mortarpod, eating the little metal snack. Utter-Leyton filled the void with a Glint Hawk and an Etched Champion, still out of metalcraft. Shenhar began his turn by making a deadly Wolf token before using a Fiend Hunter to remove the Champion while he still could. Utter-Leyton was down to a lone Glint Hawk, two Plains, and two copies of Inkmoth Nexus. With three cards in hand, he sat and contemplated. Shenhar had the same number of cards in hand, and a much better board. Eventually, Utter-Leyton activated his Inkmoth Nexuses and sent them at the two-loyalty Garruk, the Veil-Cursed while the Glint Hawk hit Shenhar himself. The Birds of Paradise took one for the team, jumping in front of a Nexus and keeping Garruk alive. After combat, a Mox Opal allowed Utter-Leyton to play a second Glint Hawk for free. Josh Utter-Leyton's Tempered Steel deck gets a little poisonous to claim the win over Shahar Shenhar.

On his turn, Shenhar used Garruk to fetch himself a Hero of Bladehold, immediately putting it into play. Utter-Leyton activated both of his Nexuses and attacked Shenhar with his team, dropping him to 12. This also gave him enough artifacts in play to Dispatch the Hero of Bladehold while Shenhar was tapped out. After untapping, Shenhar appropriately had some Timely Reinforcements, clogging the ground some and rebounding him to a safer 18 life. Utter-Leyton swung back with his fliers before making a Hero of Bladehold of his own. Just as Utter-Leyton had been ready for his, Shenhar came prepared with an Oblivion Ring for the Hero, making it the second of Utter-Leyton's creatures temporarily exiled.

At first glance, the Tempered Steel Utter-Leyton placed on his side of the table appeared innocuous, if not downright miserable under the circumstances. When I realized that one of the lands he had tapped to play it was an Inkmoth Nexus, and that there was a second one right beside it, the card became considerably more potent. Using this potency, Utter-Leyton began to unload. He had already managed to poke through for three poison counters thus far in the game. With his next attack, he made it nine. Shenhar had one more draw to save his life, and he encountered a card that would normally have a player singing praises against Tempered Steel: Creeping Corrosion. Unfortunately, when the artifacts you desperately need to kill are moonlighting as lands, the card loses a lot of its luster. With a poisonous death mere seconds away, Shenhar packed up his cards, no doubt intending to see if any of the dealers brought Leeches with them.