ichael Jacob and Steven Collett both qualified for Nationals at Regionals in Michigan. Now they've put away their Standard decks and are playing each other in Limited at 5-0.

Game 1 got off to a fast start as each player suspended a card on turn one. Ivory Giant for MJ, and Mindstab for Steve. MJ followed up with Augur of Skulls, and Steven played a Plains, revealing them both to be playing white-black. Steve didn't have a turn-two play, but did have Smallpox on turn three for MJ's Augur of Skulls. This seemed to put MJ in a bad spot as he had no pressure, and the Mindstab was about to wipe out his hand. He discarded two lands and a Lucent Liminid, showing that he'd drawn at least seven lands so far this game. 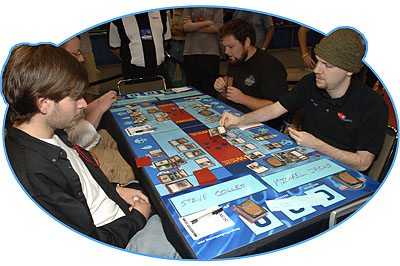 Collett, left, and Jacob both got here via Michigan Regionals.

Steve just kept coming out with hits in the form of Thunder Totem, Brain Gorgers and Putrid Cyclops, who killed himself. He also played a Forest in addition to the one he discarded to Smallpox, showing himself to be a solid three colours. MJ decided to race the Brain Gorgers with Ivory Giant, which left the life totals at 9 for Steve, and 7 for MJ after his seventh turn. MJ had Ichor Slick for the Brain Gorgers in attempt to stem the bleeding. This left him without good blocks for the Gorgon, but fortunately Steve neglected to attack, just playing Knight of Sursi with a plan to win in the air.

MJ played a Blightspeaker on his turn, which could be trouble if he had some Aven Riftwatchers to search out. An end-of-turn Stonecloaker and the Knight of Sursi put MJ on two-and in what looked like a great deal of trouble. He responded to his second Suspended Ivory Giant coming into play by activating Blightspeaker and finding exactly the Aven Riftwatcher he needed to survive.

Quagnoth showed up for Steve, but it looked like the game had already moved to the air, and a big ground guy wasn't going to be very relevant. Steve just attacked with Knight of Sursi on his turn since the Aven Riftwatcher had put MJ up to four. He followed up with the Gorgon Recluse that the Stonecloaker returned, and passed the turn. MJ had his second Ichor Slick to remove the Stonecloaker, which let the Aven Riftwatcher and Blightspeaker put Steve away in a game that looked pretty ugly for MJ at a couple of points.

Steve started off the second game with a pair of mulligans, and commented on his disdain for feature matches. Steve had Mindstab on turn one again, with a turn-three Thunder Totem to follow it up, while MJ didn't do anything for the first three turns. Steve didn't have a second white mana to activate the Totem, so he just passed turn four. MJ had a lowly Sinew Sliver for his fourth turn. 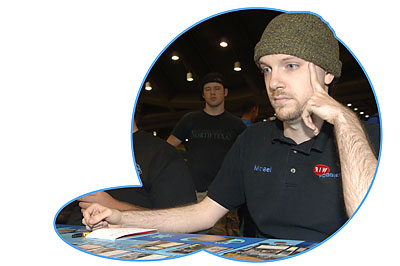 Steve's Mindstab went off on turn five, to which MJ discarded two extra lands and an Aven Riftwatcher. MJ attacked into the brains on turn five, and then played Spitting Sliver, showing that he was willing to "trade" for the Brain Gorgers in combat when he could use a trick, but didn't want to make the "trade" because he didn't simply sacrifice the Sliver to the Brain Gorgers' come-into-play trigger. Steve drew a land, which let him play Magus of the Coffers. He double-blocked the Sinew Sliver with Brain Gorgers and Magus, and MJ had Stonecloaker to make combat pretty ugly for Steve.

Steve was able to halt MJ's attacks next turn by playing Griffin Guide on Magus of the Coffers. All MJ could do was pass the turn and wait for a better opportunity to attack. Stronghold Rats showed up for Steve, and he passed the turn hoping nothing bad would happen to the Magus.

Unfortunately, something bad did happen. MJ had Death Rattle, which allowed him to get in for six with the two slivers which put Steve to 8. Steve got back with the Rats, and discarded his useless Mana Tithe while MJ discarded a land. MJ attacked with all his guys on his next turn, and regenerated his Stonecloaker with Dawn Charm after Steve blocked it with his Griffin token.

Steve didn't have a play on his next turn, and died to MJ's creatures. His two mulligans were almost certainly the deciding factor in this game.