Round 6: Rise and Rise Again

"Your deck's gotta be pretty sweet ...." said Kibler as the two shuffled up.

"Because I passed you some sweetness."

Future Hall of Fame hopeful Brian Kibler and prickly Constructed vanguard Gerry Thompson had been neighbors in the draft, and Kibler believed he'd sent clear signals to be white-black. The black signal (Vendetta, Pestilence Demon) was heard loud and clear. Unfortunately for Kibler, Thompson had started green with Nest Invader and Growth Spasm fourth, and though green dried up in pack 1, he opened a Broodwarden in pack 2 and so ignored any push to white. Kibler was red-green ramp, and said that his deck was two Kozilek's Predators short of excellent.

Kibler won the roll and put Thompson on the play. He obliged by leading out with Nest Invader ahead of Kibler's Overgrown Battlement. Growth Spasm put Thompson even farther ahead on mana. Kibler sacrificed his Spawn token to cast Wildheart Invoker, and Thompson took care of the Battlement with Bala Ged Scorpion. Kibler thought for a moment before dropping Flame Slash on the Scorpion and bashing for 4. He played Awakening Zone and passed it back to Thompson. 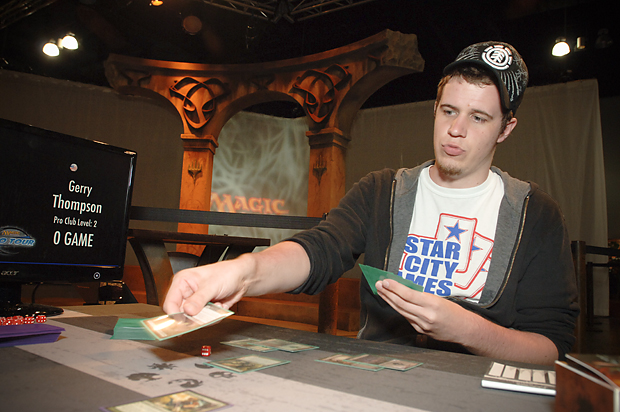 Thompson continued to build mana with another Growth Spasm, eating a Spawn to play a second Nest Invader for three Spawn total. Kibler asked for the number of cards in Thompson's hand (three) and followed up with "How many of them are Pestilence Demon?"

Kibler had access to just seven mana on his turn, and so held back on his Invoker and passed the turn. Thompson sacrificed two Spawn and showed the Demon Kibler was so interested in. Kibler answered with Ulamog's Crusher, behind in the race. Thompson flew over for 7, then cast Cadaver Imp, getting back his Scorpion.

Kibler swung in, annihilating a spawn token and the Imp. Thompson chumped with Nest Invader and Pestilenced for one to clear out Kibler's spawn. Seven mana was enough for Kibler, though. He was very happy to get Pelakka Wurm onto the battlefield and go back up to 17.

Thompson brought him back down to ten, and bolstered his forces with Cadaver Imp and Nest Invader, and then put a stop to any Invoker nonsense with Vendetta. Kibler gamely swung in with his huge monsters, but it was moot. Thompson untapped, hit for seven and Pestilenced to the win.

Thompson mulled to six for the second game, Kibler having again chosen to put him on the play. Kibler started with Kazandu Tuskcaller. Thompson played Growth Spasm. Kibler checked his options and settled on Ogre Sentry. Thompson had the Bala Ged Scorpion to get rid of the Tuskcaller before it could get online.

Kibler drew and made no play. Thompson cast Essence Feed, going up to four Spawn in play. Hoping to keep him off his brutal big spells, Kibler killed one Spawn with Spawning Breath (not getting a token, naturally), then untapped and took care of the rest with Wrap in Flames.

Thompson sent Bala Ged Scorpion on a suicide mission into the Ogre Sentry and picked it back up with Cadaver Imp. Kibler played Jaddi Lifestrider and gained 4, and Thompson swung for 1 and passed. Kibler hit back for 2, then got another Lifestrider and 4 more life. Now Thompson put his Scorpion back in play to slow the 2/8 beats.

Kibler sent both to the Red Zone and Thompson blocked with Scorpion and chumped with the Imp. Kibler added Lavafume Invoker to the mix with seven lands on the table. Thompson's Imp had a tag partner to set up a perpetual blocker. Kibler forced it off the table with another attack and tried Pelakka Wurm. He was satisfied with provoking the Vendetta from Thompson's hand.

Thompson recycled his Imp and added a Nest Invader. The Imp and Scorpion blocked again, and this time Lavafume Invoker sent them both packing. Thompson untapped and summoned Pestilence Demon, hoping to tip the balance, but Kibler was ready with Flame Slash and Staggershock. Thompson played out two Cadaver Imps and brought the Pestilence Demon back to his hand, but time was running short. 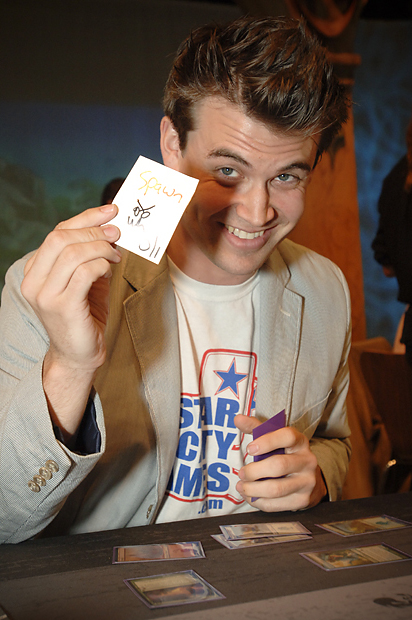 Kibler's Staggershock rebounded on the Nest Invader and he swung all out. The two Imps teamed up on Lavafume Invoker and the spawn dove in front of a Lifestrider. Kibler boosted his team and left Thompson at four. He brought out a Nest Invader and sacrificed the Spawn to bring out his Demon.

Luckily for Kibler, he had a good one waiting on top of his deck: Gigantomancer. With ten mana in play he was safe to cast it and swing in with his 2/8s, gigantifying the one the Demon chose to battle. Thompson wasn't out of it yet, though. A third Imp chained two onto the battlefield and one in hand. Kibler drew and cast Ulamog's Crusher, triggering the concession.

For the final game Thompson put Kibler on the play. He Growth Spasmed on turn three and Kibler responded with Wildheart Invoker. Induce Despair revealing Cadaver Imp took care of that problem. Kibler played Kazandu Tuskcaller and leveled it up.

"You've got one of those?" asked Kibler

"I can slow-roll you a bit more if you'd like," said Thompson, who indulged a grin as he tapped four for Bala Ged Scorpion, killing the Tuskcaller.

Kibler was stuck on four land, and played out Daggerback Basilisk. Thompson hit for 2 and cast Essence Feed, bring himself up to four Spawn on the battlefield. Kibler didn't like any of his options. He eventually swung for 2, then played a fifth land and settled for Jaddi Lifestrider. He could have played Wrap in Flames to kill three of the Spawn, but that still left Thompson with seven mana, eight if he drew a land.

Thompson fired back for 2 and played land number seven, then sacrificed a spawn for Ulamog's Crusher. Kibler frowned at the Wrap in Flames and Traitorous Instinct in his hand. Stealing the Crusher for a turn would only kill three Spawn, and he couldn't afford to be annihilated on two attacks, meaning he needed to block with his Basilisk and kill the Crusher this turn. He shrugged and cast Wrap in Flames to kill the tokens.

Thompson's Crusher brawled in, annihilating Jaddi Lifestrider and a Mountain. The Basilisk traded for it. Cadaver Imp put it back into the mix and Thompson added a Nest Invader. After the Crusher was back in play, Kibler stole it and attacked, but Thompson was in no danger. Kibler soon scooped up his cards.