Round 6: Royce Chai vs. Michael Tan 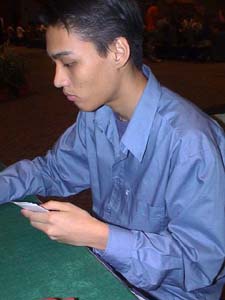 Malaysia's Michael Tan is one of those players quietly earning a strong local reputation without the high-profile finished to back it up. Recently, he made Top 16 at Grand Prix - Singapore last year. That same event saw Singapore's Royce Chai hit the Top 8. Finally Tan has a chance for revenge. Chai enjoys a bit of celebrity himself, known as "The Tourist" after he spent Worlds taking photos of himself with his opponents.

Tan leapt to the offensive immediately. Mesmeric Fiend stole Krosan Archer, leaving Patriarch's Desire behind. He then suited up with Ghostly Wings and started serving. Nantuko Disciple gave Chai pause, but he wanted that Krosan Archer back. Down came the Desire, and Tan pitched to rescue it. When the Fiend came back, it stole Chai's best hope: Narcissism.

Chai sighed and made the Archer. Tan overtrumped with Grotesque Hybrid. Chai was backed into a corner. He was forced to use and reuse his Acorn Harvest to make Tan think he was planning something. Tan dropped him to six with the Hybrid. Chai counterattacked, but Tan still stood at fifteen. He tried a Cephalid Scout to block, but Seton's Desire on the Fiend meant he was taking too much damage, too fast. He soon succumbed.

Chai kicked off the second with Basking Rootwalla. It hit twice, then fell to Afflict. He was clearly short on offense, as he brought it back with Morgue Theft. Tan meanwhile got his Deep Analysis on, and answered Narcissism by tapping out for Dirty Wererat and Wild Mongrel. He was already at eleven. He had to play it safe. 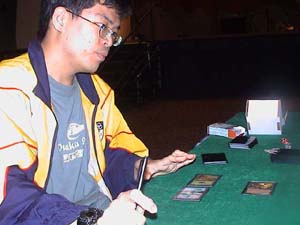 Chai put Patriarch's Desire on the dog. Tan kept it alive for a turn with a pitch. Then he added Zombie Assassin to his team. Stupefying Touch took away Dirty Wererat's regeneration, but again Tan pitched to keep it active for a turn. Chai added Werebear, trying to keep up.

Tan continued to outstrip him. Cartographer and Hydromorph Guardian made sure he'd have ample defenders. Zombie Assassin ate the Rootwalla after Chai pitched to save it. Tan hit back, and added Hydromorph Gull to his team. Chai forced him to blow up his Guardian to stop a Demise on it.

Here Chai made a mistake. He could have put Ghostly Wings on the Gull and pitched a card to bounce it. Then the way would be clear for his Werebear. He could then sacrifice Narcissism, getting Threshold, then use his Centaur Garden for the win. Instead he attacked with the Bear, and discarded both cards to kill the Gull and hit threshold.

Tan made him sad with a Faceless Butcher. Chai topdecked Krosan Archer to stay in the game. Attacking was an impossibility for Tan. He reused Deep Analysis to find more attackers. Mesmeric Fiend forced out Elephant Ambush, then Tan used Cultural Exchange to take the token and Archer, giving up his Fiend and Cartographer.

Time was called. Both players hadn't noticed their overly cautious pace of play. Chai tried a last desperate attack to win the game and earn a draw, but Tan blunted it easily. He was thus wide open, and Tan was able to win handily.