Round 6: Rui Mariani vs. Stefano Loppi 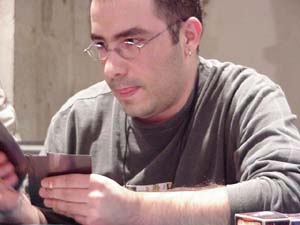 You can call Rui Mariani the Grandfather of Portuguese Magic. As the oldest of the good Portuguese players, he often is the one players turn to for guidance and some council. Of course he sometimes acts like a little kid but he is still a key player in Portugal.

Mariani took a mulligan, kept his second hand, and Stefano quickly took advantage of that coming out with Soul Warden and Mother of Runes before the Portuguese could even play a spell.

Seeing two Volcanic Island, the Italian played a Seal of Cleansing (expecting Donate) while Rui played Accumulated Knowledge and Brainstorm. When he played a Treetop the cat was out of the bag: this sure wasn't Donate.

The white creatures kept piling up with Stefano now having three Wardens and a Spectral Lynx. Despite the Treetop's blocking, Mariani fell down to eight and was in quick need of an answer. In fact more than an answer since the Mother was nullifying the two Swords in his hand.

He Forced a Mystic Crusader and was surprised to see his first Sword on the Lynx resolve. Loppi played a Cursed Scroll, in case his creatures ran out of steam, and a Meddling Mage locking out Force of Will and going down to one card.

In desperate need of an answer, Mariani Disrupted his own Swords to draw an extra card. He still came out empty and was forced to play two Oaths to make sure one would stick around. The next swing brought him down to four (since he Sworded the Mage and Fired two other creatures) and Loppi played another Mage locking exactly the same card: Force of Will.

Oath brought out Morphling and Stefano was now locked out of the red zone. He played another Crusader to go down to one card in hand and Mariani's Oath brought up a Ancient Hydra.

He was two 'Scroll' hits away from death, in serious need of a Feeder. He spent two Brainstorms looking for answers but got only land. The Morphling for the second time brought Loppi down to thirty.

The Italian begged his deck for a land but got a Mother of Runes instead. He played it along with a Spectral Lynx and the Hydra's machinegun took out the Mother, Warden and Lynx.

The Oath revealed Mariani had no other main deck creature so he had to make do with only the Morphling and the Hydra. The Morphling took another huge bite but there was nothing to stop the incoming Scroll hit.

Again Mariani took a mulligan, this time with his only two lands being Treetop Villages. To keep things fair Stefano also took a mulligan. He still came out fast with a first turn Mother of Runes and a Seal of Cleansing on the second turn.

A Brainstorm later Mariani matched the Seal with his own Seal. But Stefano wasn't out of anti-Oath cards: He tried to play a Phyrexian Furnace. Mariani Forced it and traded Seals before playing his Oath and countering a Swords. 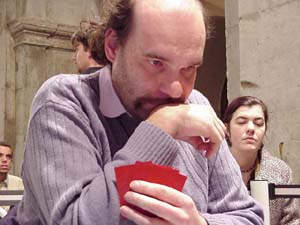 Loppi's sigh of relief on his turn showed he had no way out of that mess. The Oath brought a Morphling and reshuffled the graveyard into the library. The Italian finally found an answer - Aura of Silence - but it was too late: Superman was on the table.

A Spectral Lynx and a Meddling Mage - locking Force of Will - joined the Mother and it looked like Morphling had to be careful to stop any counterattacks.

A second Aura took out a second Oath. The Mother tapped to let the Mage survived the block and was soon sent farming. Morphling brought the Italian down to ten and a Fire killed the Lynx and a Soul Warden.

Two turns later the Morphling took the Treetop with it into the Red Zone for the last swing. The game was over with nine minutes on the clock.

Things heated up right on the first turn when Mariani Forced a Phyrexian Furnace. Stefano Wastelanded the wrong land, a sacrifice land, and when he realized his mistake it was too late to take back. Mariani used a Brainstorm to fix his hand before using the Flood Plains to fetch a dual.

While the Portuguese went about his card drawing schemes Stefano was dropping good old-fashioned creatures. One was Fired away and the second one was the perfect bait for the Oath.

A Force Of Will stopped Stefano from Swording his own creature and Morphling came out to play. Loppi tried to flood the table with Spectral Lynx and a Soul Warden but a Swords kept those plans within control.

The Morphling and the Ancient Hydra were now active as time ticked down. Despite an unexpected block by a threshold Mystic Crusader there was no stopping the Superman.