Round 6: Satoshi Nakamura vs. Michihisa Onoda 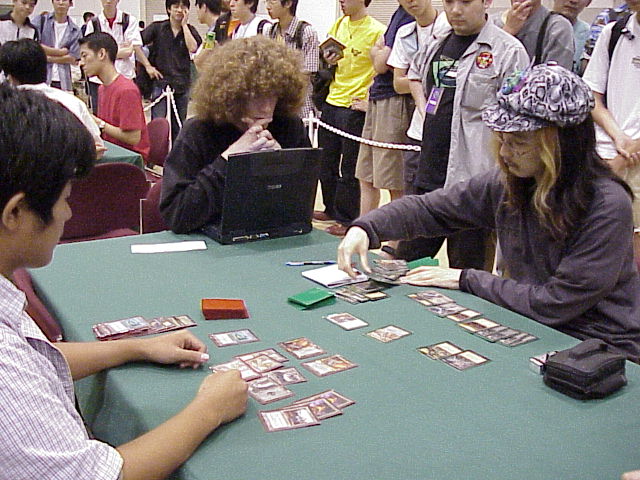 There's little left to say about Satoshi Nakamura. Well-known and well-liked both for his talent and sportsmanship, he is probably Japan's most-recognized player. He was certainly sorely missed at this year's World Championships, where it seemed every pro was asking after him. In this round, he and his Black-White Aggro Arena deck faced off against last year's Japanese National Champion, Michihisa Onoda. Onoda has quite a career of his own, having competed at multiple Pro Tours. Today he is playing Black-Red-Blue control.

Onoda was the first on the board with Nightscape Familiar. Nakamura held back on his Spectral Lynx to mess with Onoda's mana, Vindicating his Salt Marsh. When Onoda replaced it with a swamp, Nakamura tried the same trick again. This time, Onoda Undermined.

Nakamura brought his Lynx to the table, and Onoda went to the dome with Prophetic Bolt. Onoda untapped and passed the turn back. Nakamura made a Putrid Warrior, and Onoda Maliced the incoming Lynx. This gave Nakamura a window to Death Grasp the troublesome Familiar.

Onoda played a second one, claiming the ground as his turf. Nakamura played a Phyrexian Arena and settled in for the long game. Onoda, meanwhile, was on an empty hand, and topdecked two lands, putting them both into play. He was lucky that Nakamura's Arena was working slow enough to convince him to drop Yawgmoth's Agenda. The following turn Nakamura went to the head with a Death Grasp for five.

Nakamura went on the offensive with a pro-red Voice of All, only to watch as Onoda's Fact or Fiction gave him Undermine and Void over Salt Marsh, Nightscape Familiar and Fact or Fiction. The Void took care of the Voice, and the Undermine stopped a Putrid Warrior. 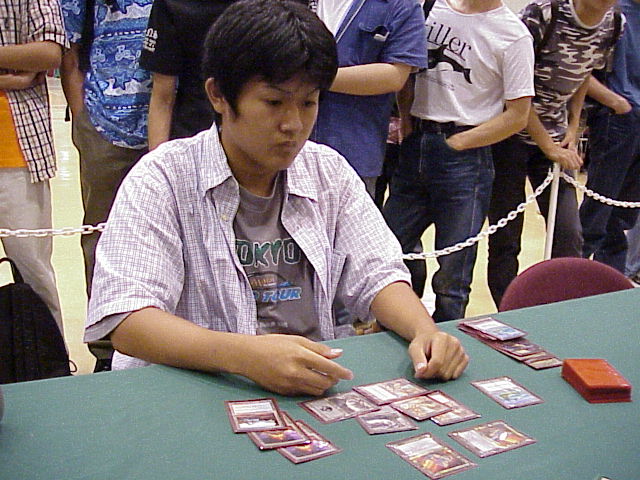 Nakamura was relentless, playing out yet another Putrid Warrior. When Onoda failed to break the game wide-open, Nakamura took the reins. He Vindicated his Agenda and played Gerrard's Verdict on himself to gain six life. Shivan Zombie touched down to threaten destruction. Nakamura tried Addle away Onoda's last card, but it was Crosis's Charm, and bounced the Zombie. Nakamura was free to Rout away the troublesome board.

Onoda topdecked Void, and wasted no time playing it for two. A Pro-red Voice of All joined Nakamura's forces. He was way behind, however, and had to take punishment from a Shivan Zombie. He played a second Agenda to have access to Gerrard's Verdict, rising to ten life.

With his next play of Putrid Warrior he looked to be taking the match. Onoda untapped and played Ghitu Fire for eight. Nakamura double-checked that he couldn't avoid dying to his own Arena, then scooped.

Nakamura busted out Putrid Warrior to start the second game. He compounded the beatdown with Spectral Lynx. Onoda's Shivan Zombie put an end to all that fun. Nakamura was stuck at three land and only one black source. He Addled for blue, and stole Fire/Ice, leaving behind two Urza's Rages, Ghitu Fire and Nightscape Familiar.

Onoda turned it around, dropping Nightscape Familiar and blowing up the Lynx with Urza's Rage. He lost the second Rage and the Ghitu Fire to Nakamura's Gerrard's Verdict, but had Undermine ready for his Addle. Onoda went for the throat, playing his last card, Void for five.

It missed. Now Nakamura was in full control. The two traded hits while Onoda topdecked lands. Angel of Mercy came down for Nakamura, and now Onoda's Zombie was playing defense. It wasn't enough. Nakamura also had Voice of All. 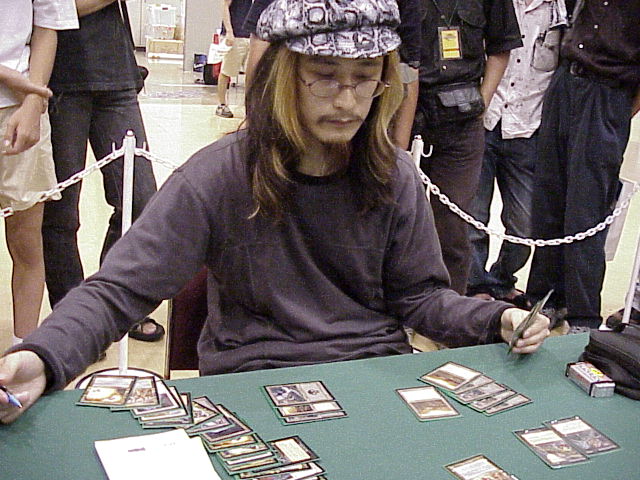 Onoda's last play was Lobotomy, taking Nakamura's Arenas. After taking a second salvo of five, he packed up his cards.

Nakamura got to kick off again in game three, and turned it to his advantage. His Putrid Warrior came down, and after Onoda's Nightscape Familiar was dispatched with Death Grasp, brought the noise. Nakamura thought hard before choosing to have both players lose life. Onoda was struggling with a lack of red mana.

The race was on. Onoda Fact or Fictioned into Spite/Malice and Shivan Reef. Shivan Zombie called a halt to Nakamura's Party. Nakamura tried a Death Grasp for four on Onoda, but was Undermined. Spectral Lynx entered play fine, but another Undermine was waiting for Gerrard's Verdict.

Onoda made a second Zombie, and Nakamura matched him with Spectral Lynx. Unfortunately for him, the race was heavily in Onoda's favor. His last hope was to draw out the Spite/Malice with a Rout on Onoda's upkeep and to pray that Onoda didn't have any burn. Aside from that last part, things went according to plan. Onoda simply had the gall to turn over Urza's Rage, taking the match.