Round 6: Silence is Deadly

6 was do or die for these two competitors. While we were waiting for Guillaume to show up to the round Jeff and I were chatting. During this time Jeff mentioned that he was concerned about this matchup as his opponent's deck was, as he said, "the stone-cold nuts!" Not a good sign when it comes to a must-win situation. 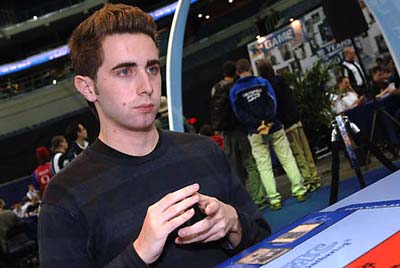 Transfixed by the game? Or just jet-lagged?

The game began and the first few turns were uneventful until a turn-four Streetbreaker Wurm brought a very large monster to Guillaume's side of the board. Jeff felt he didn't need to cast big monsters as he can just build them instead. Moldervine Cloak, meet Beacon Hawk, Beacon Hawk meet Moldervine Cloak, Beacon Hawk attack for four. Hey it's like it has vigilance!

Wafo-Tapa decided that the cards in his hand were not good enough to deal with this new threat and responded to the turn of events by generating some sick card advantage as the train (of thought) came in and brought three new cards to Guillaume's hand.

With Guillaume tapped out, Ffej took the opportunity to put a Pillory of the Sleepless on the six-powered Streetbreaker Wurm. An attack from the oversized Hawk and the upkeep life loss from Pillory brought Guillaume to 11 with Jeff still at 14.

For his part, Guillaume sent Muddle the Mixture to fetch Peel from Reality and suddenly the lowly Starfletcher was able to attack for one as all other creatures have been returned to their owners hand.

On his next turn Guillaume cast the Supply half of Supply/Demand, generating seven saprolings. In fact, Guillaume made so many tokens that he has to go back for more paper as the first supply was not enough to make all the little dudes.

After a frustrating non-turn from Ffej he said, "Go." Now normally this would not warrant mentioning in the coverage, but as this was the first word spoken by either player, I thought it should be included.

All in went the remaining six tokens and Ffej dropped to nine. Patagia Viper and the long-ago bounced Streetbreaker Wurm joined Guillaume's side of the board.

With as many creatures as Wafo-Tapa had on the board, Jeff realized that attacking may not be the most prudent course of action and decided that summoning a Simic Ragwurm for additional defense was the way to go. A very frustrated sounding "go" from Jeff followed up this play.

Guillaume decided that his tokens were not big enough in the their current state so he Thrived his team and committed everything to the red zone. Ffej scooped. 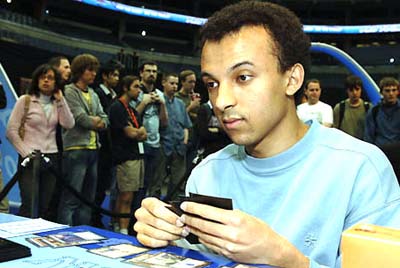 Wafo-Tapa put the pressure on from the start of Game 2.

This was one of those games you would not wish on your worst enemy. It all started when Ffej looked at his opening seven and decided that they were not good enough. Ffej had to think about this six-card hand: Forest, Swamp, Ghor-Clan Savage, Withstand, Simic Initiate, and Golgari Rotwurm but eventually decided to send it back. Now down to five cards and not willing to go any lower, Ffej kept. Guillaume started off blazing and just never stopped. A turn-three Simic Ragwurm was followed by a turn four Streetbreaker Wurm.

All Jeff can do is put up some defense with a Golgari Rotwurm. Interestingly this brought the total number of Wurm in play to four. We checked with Pro Tour historian Brian David-Marshall and yes that is a world record. Back to the action, after a team attack from Wafo-Tapa, all Guillaume had to do was shoot a Cackling Flames at Jeff's head and the match was over.

Congratulations to Guillaume on making Day Two of Pro Tour-Prague.