Round 6:
Snapbacks, Slaughters, and Combacks

No points will be awarded for guessing what type of deck Guillaume Wafo-Tapa chose to play for this weekend. Wafo-Tapa is probably the purest control mage since Andrew Cuneo, and with even without Sphinx's Revelation in the format, he'd find a way to make Islands work.

However, if you had Conley Woods in the brewery with the Griselbrands as your deduction, then step right up and collect your prize. He asserts that at long last Mono-Black Control (or nearly, anyways, as he's playing 17 Swamps, So I think that counts) is a real deck and not just a cruel prank being carried about by the return of Mutilate. 3-2 isn't the most comfortable record, and both players were doing their best to think positive. 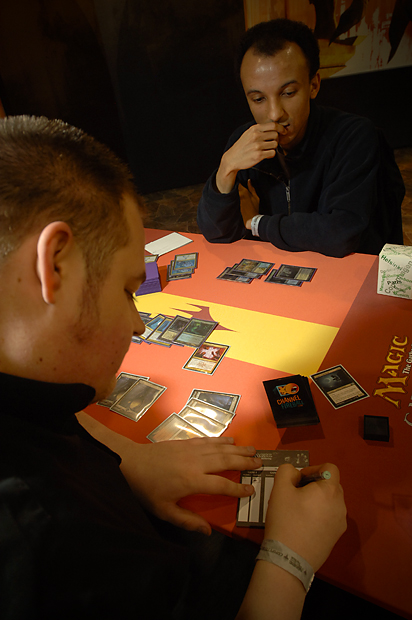 Guillaume Wafo-Tapa and Conley Woods surprised approximately nobody today when they showed up with trademark deck choices: a control deck with Islands, and an unexpected creation.

Wafo-Tapa went to six, and after keeping his new hand, they were off. Woods led out with a pair of Swamps, and after Augur of Bolas served up Azorius Charm, Woods dispatched it with Victim of Night. This let Woods play Lilana of the Veil unopposed. Wafo-Tapa discarded the Charm and Woods pitched a spare land.

This situation was unacceptable to Wafo-Tapa, who played his third land and put Liliana in the Detention Sphere. Woods played his fourth land and passed. This would prove to be something of a theme for the game. Wafo-Tapa cast Divination, and then Tamiyo, the Moon Sage, locking up Woods's only red source.

Woods continued to hit land drops and little else. Eventually he found a second red and tried to Dreadbore Tamiyo, but after short reflection, Wafo-Tapa Dissipated. Think Twices had kept Wafo-Tapa's hand stocked. He had Ultimate Price for Vampire Nighthawk, and then got Tamiyo's Emblem. It only took one activation of Nephalia Drownyard to "draw" three cards (thanks to the Tamiyo emblem) to convince Woods to pack it in.

"I'm still not entirely sure what you're playing." - Guillaume Wafo-Tapa

"*I'M* not entirely sure what I'm playing." - Conley Woods

Woods drew up seven with no lands and sent them packing. The next six were sufficient. Woods's first play was Vampire Nighthawk, met with Ultimate Price from Wafo-Tapa, who cycled his Azorius Charm and continued playing lands. Not much happened until Woods found a Dragonskull Summit and cast Slaughter Games. Wafo-Tapa could only Sphinx's Revelation for one in response, thanks to his fifth land coming into play tapped. Still, Woods named Sphinx's Revelation. Wafo-Tapa turned over a hand of two Detention Spheres, Ultimate Price, Tribute to Hunter, and two lands. Woods looked through the rest of his deck, took out the Revelations, then played a Pithing Needle on Nephalia Drownyard. 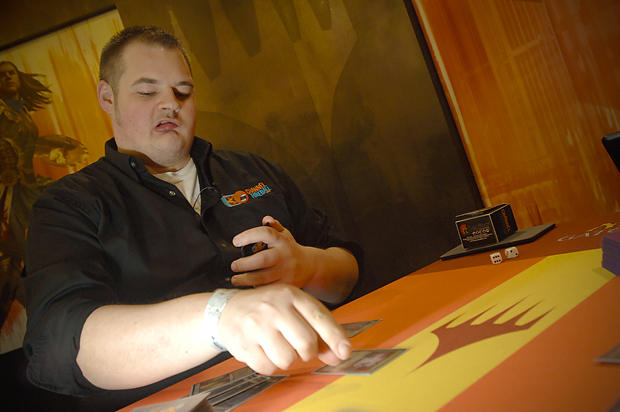 Woods had some powerful plays after the first game. Turns out, it's easier to out-draw the blue deck when you can exile all of their Sphinx's Revelations.

Wafo-Tapa untapped, then played Detention Sphere to take out the Needle. Woods untapped and played Rakdos's Return for the full amount, leaving Wafo-Tapa empty-handed. He could only laugh when Wafo-Tapa plucked Augur of Bolas, revealing Think Twice. Luckily, Woods had some Undercity Connections he could draw on for cards of his own.

Despite the fact that Think Twice turned into Divination, and that into another Think Twice, Wafo-Tapa was fighting a losing battle. He found Tamiyo to shut off the Connections, but Woods had Dreadbore at the ready, so it was only a temporary reprieve. Worse was the follow-up: Griselbrand.

Wafo-Tapa nodded slowly, then picked up his cards.

Wafo-Tapa led out with a pair of Glacial Fortresses. Woods Duressed him on turn two, seeing Dissipate, two Snapcaster Mages, Sphinx's Revelation, Azorius Charm and Nephalia Drownyard. He took Dissipate. Wafo-Tapa played a tapped Godless Shrine and passed, ensuring Woods knew the coast was clear for Undercity Connections. He lowered the boom on the following turn with Slaughter Games.

On the other side of the table, Wafo-Tapa was in a bind. He had cycled his Azorius Charm into a second Sphinx's Revelation, and groaned internally when his draw step gave up a third copy. He only had four lands. He could Revelation for one, but then Woods was bound to name Snapcaster Mage. He decided to put his eggs in the beatdown basket and played Snapcaster, targeting Azorius Charm, then let the Games begin. Woods naturally named Sphinx's Revelation and laughed at his good fortune.

Wafo-Tapa flashed back the Charm for a card. He untapped, played a land, and though it was completely out of character for him, attacked for 2. 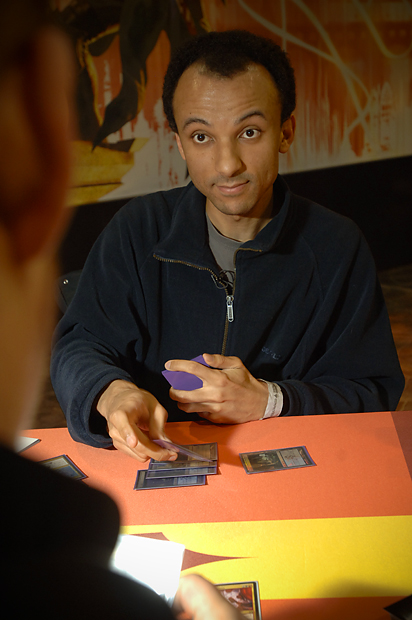 Wafo-Tapa surprises spectators by switching to an aggressive back-up plan.

Woods drew for his turn, and one extra from his Connections, then tried Liliana of the Veil. Wafo-Tapa Snapcastered his Dissipate, upping his clock. Better still, Woods had no fifth land. Wafo-Tapa brought Woods to thirteen. The Connections made it twelve. Dreadbore resolved on one of the Snapcasters, but he still had no land. Nor did he on the following turn after Wafo-Tapa took care of Vampire Nighthawk with Ultimate Price.

Wafo-Tapa played Divination and knocked Woods to seven. Connections took him to six. Finally he founda fifth land for Woods, and a Rakdos's Return for two, but again Wafo-Tapa had Dissipate. Another attack had him at four. Wafo-Tapa tapped five for Jace, Memory Adept, and drew a card, milling Woods for one. He paid two life for Hallowed Fountain to have three mana open.

Here Woods had to think. He was very close to stabilizing the game. He had Crypt Ghast and Duress, as well as a sixth land. He decided he couldn't risk Wafo-Tapa having the Dissipate just for a point of extort. He played Duress. Wafo-Tapa put Think Twice in his graveyard. Still, Woods got his Crypt Ghast in play. He passed with his Connections untapped.

Wafo-Tapa flashed back Think Twice, then untapped, drew with Jace, and attacked. Woods refused to risk his Ghast and fell to two. Wafo-Tapa cycled Azorius Charm, then played Devour Flesh targeting Woods to get rid of the Ghast. That put him to four, and he went to three for a card. Wafo-Tapa had just one card in hand. Woods tapped six for Staff of Nin, finally ending Wafo-Tapa's beatdown plan.

However, he was still on a clock. Wafo-Tapa had his Nephalia Drownyard and Jace in play. He milled for three, untapped, and thought. He counted Woods's library, which contained just 33 cards. He gave Jace the go-ahead, and milled him for ten cards. Woods drew three and looked at his options. He tapped out for Griselbrand. Nephalia Drownyard and Jace did their thing, and Woods was at seven cards. Then five on his turn. He counted his options again and again. He could do sixteen: A Griselbrand attack, a Rakdos's Return for seven, a ping from the Staff, and then one more ping with its draw effect on the stack.

Wafo-Tapa was at 17. One point out of range. One extort trigger.

Woods scooped. Wafo-Tapa took some of the sting out by showing the Dissipate he had in hand.