last time Neil Reeves was seen at a high-level event he was playing for the Top 8 of last year's U.S. Nationals (he also lost in the Top 8 of the previous year's Nationals). He lost the first game to a deck registration error and then the next game to a Fireball. Since then, he has nosed around a couple of more Pro Tours and even made the Top 8 of Grand Prix-Austin early after the release of Champions. He picked up the 10 points necessary to achieve Level 2 in the Players Club and came to Nationals to try the game on for size again. 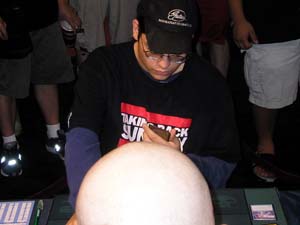 The bald head of Neil Reeves looms over Adam Chambers.

Reeves is a consummate gamer, never far from competition. On top of that, he is a coverage reporter's ideal feature match combatant. He keeps up a non-stop stream of talk that is both entertaining and disarming for his opponent. He cultivates a good old boy persona that masks a cutting wit and the fact that he is simply smarter than everyone else. At 5-0 he was in a good position to make another run at the Top 8 that eluded him last year.

Standing in his way was Adam Chambers. Call it a circle of life. As one high-level Magic star begins to fade, another one takes his place. Chambers caught people's attention at Pro Tour-Atlanta this year when his team We Add reached the finals before falling to Gabriel Nassif and his Nova teammates. He was at the core of the Taking Back Sunday mailing list - if you look carefully at the Atlanta, coverage he was wearing a TBS shirt well before the team formally coalesced.

Adam also puts up a deceptive front. He makes a big deal about the "bad" creatures he loves to play with in Limited and all the "wrong" things he likes to do, such as choosing to draw in almost every Limited scenario. Don't be fooled by that Fiddlehead Fern though, Adam will not leave a point of damage unbled, and while you might not agree with his card choices they certainly work well for him.

Neil Reeves led off his game with Dripping-Tongue Zubera. He attempted to follow up with Elder Pine Jukai but got gut punched by Chambers' countermagic.

Neil leaned over to Gabe Walls at the next table, "I just got Hisoka's Defianced out of this tournament."

Neil brightened as Adam passed his third turn without playing land or spell, "Never mind - unless you have another one." 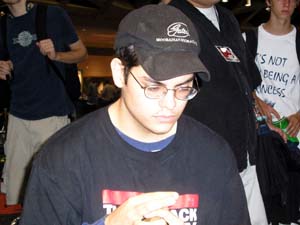 Neil's Rootrunner resolved without incident. Adam tried to make a game of it with Deathmask Nezumi and a hard-cast Ninja of Deep Hours but Neil followed up with Shinen of Fire's Fury, Shinen of Life's Roar, and Loam Dweller and promised, "I am sending them all next turn."

Adam agreed that it was wise to move onto Game 2 and they both reached for their sideboards. Neil was feeling good about his win.

"What was my big beater that game?" asked Neil.

"Thanks, I couldn't remember if it was him or Fiddlehead Fern - don't make any cracks about the Fiddlehead."

Adam put his hands up, "Hey, I like the Fiddlehead Fern."

Adam may have been using understatement here as I have never seen him draft a deck that did not have multiple 3/3 creatures for five mana - and not even close to the top of his curve.

Adam actually chose to draw in Game 2, which drew an arched eyebrow from Reeves. Ghost-Lit Stalker was Adam's first play on the draw. Neil came back with Loam Dweller while Adam played No-Dachi. The equipment loomed a little larger on the next turn when Adam returned Neil's Elder Pine with Mistblade Shinobi.

Neil was concerned, "He's got No-Dachi and Mistblade. I'm not gonna lie…it does not look good for my team."

Still Neil looked good when he cast Molting Skin and used Time of Need to find Kiki-Jiki - although he needed to find a third Mountain to turn it on. Adam sent in his well-equipped ninja and Neil blocked and regenerated with Molting Skin - it would be a good plan if the Ghost-Lit Stalker's ability was not looming one mana away.

Neil could not play anything on his turn out of respect for the discard spirit. He blocked the ninja with Loam Dweller and attempted to channel Ghost-Lit Nourisher but Adam came over the top with Rend Spirit.

Neil replayed his Elder Pine and the Molting Skin and hoped for the best. He blocked the ninja and regenerated by returning his enchantment. Adam played his fifth land and emptied Neil's grip.

"I just got blowed out."

Neil played Orbweaver Kumo and drew a land with his Elder-Pine. Teller of Tales showed up on Adam's side of the table - Neil was out of gas. Quillmane Baku tapped the ersatz spider and it was bounced with the ninja. Neil replayed the spirit and hit another land which allowed him to add Ishi Ishi to his rag tag army.

Adam played a second Quillmane and arched Neil's other eyebrow. "Hahaha, nice deck you have there."

Neil killed the Teller with Torrent of Stone but it was too little too late as the army of 5-mana 3/3s came over for the kill.

Neil tried to decide if he wanted to play or draw. "Hmmm…you let me play first and you have der infi Snidds in your deck."

"Snidd, snidd, snidd," sang Reeves as he continued to think and flip through his cards. He stopped on his 3/4 from last game. "How did Orbweaver Kumo taste, sucka?" 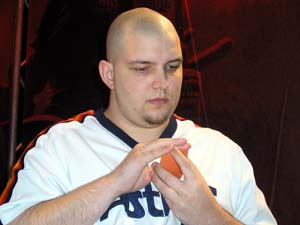 Neil decided to play and slumped as he looked at an unkeepable hand. "I guess this is what I get."

Adam shrugged again - it is pretty much the entire range of his in-game expressions: "I always draw no matter what my deck is like. I would have been sad if you had made me play."

Neil frowned at his next six. Adam had to ask, "Better?"

"Nope, but I guess it had to happen sooner or later." Neil looked at the two lands of his five-card hand and announced he was keeping before even seeing the next three.

Adam played Kiku, Night's Flower and Neil resisted the urge to bug out his eyes. "You got a Kiku?"

He could not hold back the bugging when Adam smiled, "Yeah, I got it fourth pick."

Neil was stuck on two and could only observe as Adam played out his non-Snidds - Hired Muscle and Nezumi Graverobber and No-Dacchi.

Neil packed it in and saw no reason to play it out stuck on two Forests. "I see you found your good cards. You had all bad ones last game and you beat me so…"

Adam took one last look at Kiku before she was shuffled back into his deck for one more round of action. "I have never taken a card as quickly as my fourth-pick Kiku. What could they have taken over it?"

Neil let out a deep breath as he showed Adam cards from his sideboard that would indicate Adam was the lone black drafter at the table. "I got this Horobi's Whisper sixth pick and the Black Honden ninth."

Final result: Adam Chambers won two games to one over Neil Reeves and was one of only two players left in the tournament with a 6-0 record. Neil could console himself with a 5-1 record going into the final round.