Round 6: Stephen Cassell vs. Kyle Hadfield 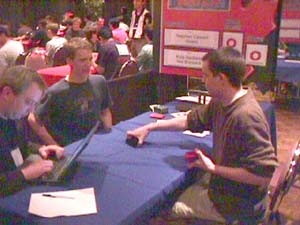 Kyle Hadfield, originally from Ontario, currently goes to school in Nova Scotia, which allowed him to play in South Maritime Regionals, where he made top 4. He is no stranger to big events, having finished in the Top 32 at PT Nice. He is still a newcomer to the game, however, having participated in only 15 sanctioned events lifetime. Quite a start to a career.

Steve Cassell recently broke into the big time with a Top 8 at GP Milwaukee playing ZevAtog, but now he's running a red Psychatog deck, packed with burn and Merfolk Looters.

Hadfield is currently 4-0-1, looking to remain undefeated. Cassell has one loss.

Hadfield kept a hand with just a Mountain for land. He dropped a quick Grim Lavamancer, but Cassell had the better play with a Merfolk Looter. Hadfield kept the one-Mountain hand for a reason, though, and Firebolted the Looter.

Cassell, stuck at two land himself, played another Looter, but Hadfield had another Firebolt. Cassell seem unfazed, and played a third Looter.

Cassell: "What are the odds of you drawing three Firebolts?"
Hadfield: "The same as you drawing fifty million Looters."

Of course, Hadfield had the third Firebolt. He also had drawn a Forest an a Basking Rootwalla. Cassell had a mini-Wrath of God, Fire/Ice, that killed Hadfield's two men. Cassell, having drawn out of his mana problems, played the FOURTH Merfolk Looter. Reeee-diculous. 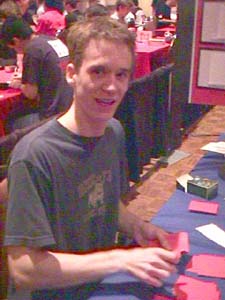 Hadfield: "And now I get to make my first error on the Sideboard."

He split the piles Counter x2 + Mountain, and that's the pile Cassell chose. The Looter then started working overtime, enabling madness on Fiery Temper, Circular Logic, and even Obsessive Search. Hadfield never pulled out of him mana problems, and with all the extra cards, Cassell was able to overwhelm him with two Flametongue Kavu and a bunch of permission.

Hadfield came out blazing with a Yavimaya Barbarian and two Wild Mongrels. Cassell, with only Islands, had little to do except Ice a Mongrel to prevent two damage. He eventually found red, allowing him to cast a Flametongue, but Hadfield had a Flametongue of his own, and Cassell's life was dropping quickly.

Cassell found a Crosis's Catacombs, which allowed him to cast a Psychatog. Hadfield was finally clued in on what the black was for in Cassell's deck. But Hadfield showed no fear, and kept attacking into the Psychatog just to get in damage. Eventually Cassell's life was low enough that Fiery Temper sealed the deal.

Hadfield kept a one-Forest draw ("I know, I'm really dumb."), but drew two Mountains with his first two draws. How lucky. He started with a Grim Lavamancer and a Call of the Herd, but when he flashed the Call back, Cassell Hibernationed.

Hadfield: "I walked into that."
Cassell: "Yes you did." 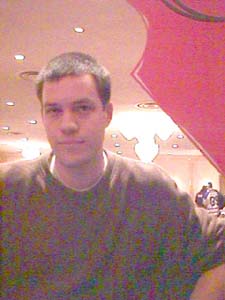 On his next turn, Hadfield tried two Meteor Storms (the first was Counterspelled), and now Cassell had real problems, especially considering he had no black mana available. He did manage to Flametongue the Lavamancer, but Hadfield killed the Flametongue with a Fiery Temper and then hit Cassell with a Firebolt to the head. (Yes, that seems backwards, two to you and three to the Flametongue. I would have played it very differently... Hadfield had four land and a Meteor Storm in play, with a hand of Firebolt, Fiery Temper, land and Rootwalla. I think the most optimal play would have been Firebolt the Kavu and play the land, then on his next upkeep, tap five mana and discard the Rootwalla and the Temper to Meteor Storm.)

But even playing all willy-nilly, Hadfield was able to dispatch Cassell with activations of Meteor Storm and flashed-back Firebolts.

After watching six rounds of R/G vs. 'Tog, it looks like R/G loses to regular U/B Psychatog, but beats R/U/b 'Tog. Is that what's supposed to happen?