Round 6: A Study in Value

By now the crowds of watchers at the Feature Match arena had grown to three ranks. The back row craned their necks to catch sight of the battle between Sam Black and former Player of the Year Shouta Yasooka. They were both 4-1 going into this match and looking to begin the Limited portion of the Pro Tour with a win.

Yasooka mulliganed and stayed on six. Black led with two swamps and Wall of Tanglecord. Yasooka had forest, plains, and Horizon Spellbomb. Black pulled further ahead on cards with Phyrexian Rager while Yasooka played an island and got ready to crack his Spellbomb.

Black hit for 2 and brought down Sword of Body and Mind. Yasooka sought the Horizon at end of turn, then untapped and played Revoke Existence on the Sword before it could be any trouble. He also made a Flayer Husk before passing it back to Black. 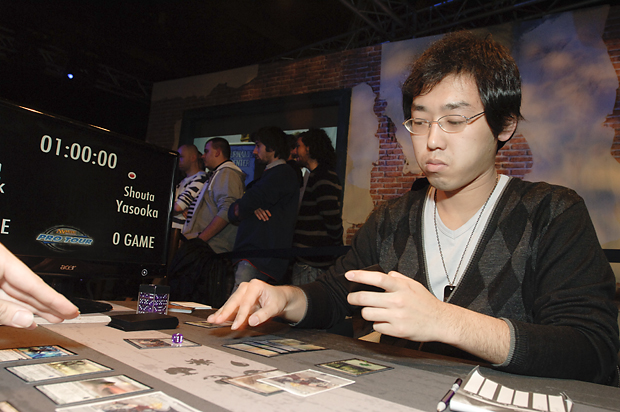 Shouta Yasooka ponders his next move.

Black admired the card Yasooka was using to represent his Germ token, and asked to borrow some of them to go with his Precursor Golem. Nine power out of nowhere is no joke. Yasooka made a Tumble Magnet to stem the bleeding and chumped one of the incoming Golems. Black piled on with Bleak Coven Vampires, and Yasooka decided it was time for Game 2.

Yasooka put Black on the play for the next game. Black made the first play, a Sword of Body and Mind on turn three. Yasooka answered with Sylvok Replica, but Black had no play on his four mana, so there was no need to dispatch the Sword right away. He got in for one and added Ezuri's Brigade to the table. Black made Bleak Coven Vampires and was happy to accept Yasooka's offer of a trade. Yasooka replaced it with Tel-Jilad Fallen.

Black summoned Neurok Replica. Yasooka one-upped with Blightwidow. Darkslick Drake from Black was enough to force the Sylvok Replica to get rid of the Sword, and Yasooka brought it back for an encore with Razor Hippogriff. Black kept up in the card race with a Phyrexian Rager who was happy to drag down the Fallen when it came across the following turn.

Yasooka pressed his advantage with the giant Fangren Marauder. Black brought down Accorder's Shield to tighten his defences, but first gave it to his Darkslick Drake, running it straight into Blightwidow. Rolling his eyes at his mistake, Black moved the Shield over to the Neurok Replica. The path was clear for the Marauder and Hippogriff to attack. The Drake chumped the flier for a card, and the Replica stopped the Marauder. Post-combat, Sylvok Replica took out the Shield, and as a result, the Replica, netting Yasooka a whopping 15 life.

Black wasn't out of action, however. Morbid Plunder for the Drake and Rager put him right back into things, and a second Drake soon followed. Neither could push through, but that didn't last long. Black tapped seven on the following turn and dropped the Black Sun's Zenith, clearing the board, and then drawing two after the Zenith was safely back in his deck. Yasooka drew and passed the turn. 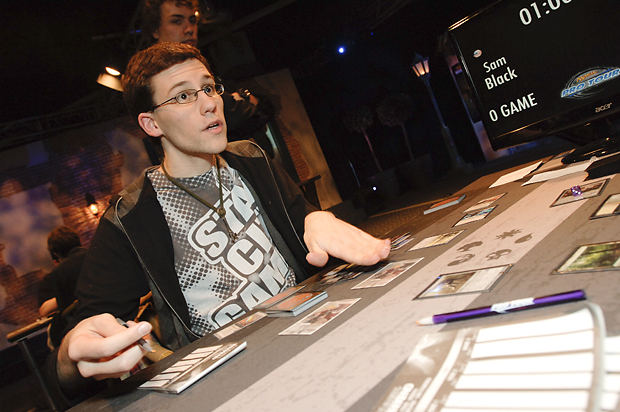 The rares kept rolling for Black, this time Precursor Golem. Yasooka had Revoke Existence to wipe them off the board, and a Molder Beast. Black had more gas in the tank, however. The Phyrexian Rager finally got back on the board, and then a second Morbid Plunder got back both Drakes. One hit from the Molder Beast brought Black to just 6. Yasooka made Flayer Husk and passed.

With Wall of Tanglecord and two Drakes, Black's defenses were solidified. Viridian Corruptor took care of the Wall, and the Molder Beast picked up the Husk to swing in for a ton. Black's team got in the way and both Drakes went to the bin. Black untapped, played Copper Carapace, equipped his Rager and swung. Post-combat he rolled out another Black Sun's Zenith, this time for three, resetting Yasooka's board.

All he could muster was Sylvok Replica, but with Flayer Husk he was a threat to Black's low life total. Black made Mortarpod and passed. Yasooka cast Horizon Spellbomb and busted it, then attacked for 2. Black declined to block and fell to 4. He summoned Moriok Replica, which was happy to chump and provide cards at the cost of Black falling to just 2.

Black clawed for purchase. He chumped another attack with the Mortarpod and watched Yasooka get Trigon of Thought going. He thwarted the next attack with Grasp of Darkness, losing his Mortarpod to Sylvok Replica in the process. He played a Trinket Mage but had nothing to search for. Between Iron Myr and Neurok Replica, Yasooka finally had enough for a lethal attack past Black's one blocker.

Yasooka dug further into his sideboard for the deciding game. Black put him on the play, but was soon facing a turn-three Blightwidow thanks to Iron Myr. Black summoned Moriok Replica and took two poison. Yasooka added Trigon of Thought to his board. Black brought out Darkslick Drake and attacked for two.

Yasooka paused on his turn before turning his Blightwidow sideways. Black declined to block, and Yasooka tapped out for Fangren Marauder. Black was ready with Spread the Sickness on his turn and hit for 4. Yasooka started using his Trigon, first giving his Blightwidow an Accorder's Shield and bringing Black up to six poison.

Now Black held back, making no play. Yasooka worked his Trigon and sent the Blightwidow in again. The Moriok Replica stood in the way and gave Black two cards. Yasooka put out a Tumble Magnet, his position seemingly strong—that is, until Black brought down the Black Sun's Zenith for five.

If not for his Trigon, Yasooka would have been buried. As it was he played out Priests of Norn and Flayer Husk. Black answered with Nested Ghoul and Trinket Mage, searching up an Accorder's Shield of his own. Yasooka locked down the Ghoul, untapped, and put the Husk on his Priests. Black chumped with his Trinket Mage. He untapped and put the Shield on his Ghoul. Yasooka declined to tap it and chumped it with his nearly-dead Blightwidow. Black bolstered his team with Fume Spitter and Bleak Coven Vampires.

Yasooka's Viridian Corruptor took care of the opposing Shield, and now he had a legitimate poison force, two 2/5 vigilance infectors. Black held back, and on the following attack chumped the Corruptor with Fume Spitter and put a counter on the Priests, leaving himself at seven poison. Morbid Plunder served up the Drake and Replica and both hit play immediately. Yasooka found Horizon Spellbomb and couldn't activate it fast enough, digging out a second Island for Corrupted Conscience on Black's Darkslick Drake, suddenly a turn from lethal.

Black waited for Yasooka to equip the Drake with Flayer Husk and used his Grasp of Darkness to stop it. At this point, the board devolved into gridlock. Both players had plenty of cards, Black thanks to his Replica, and Yasooka from his Trigon now that he had two islands. Black snarled the ground with a pair of Clone Shells, and another Blightwidow held the skies for Yasooka. Black was clearly on the plan that with his Zenith he could handily deck Yasooka.

More and more creatures spilled onto the board, but neither player could break through. Finally, with his library fast running out, Yasooka played his trump card ....

Black cast an emergency Black Sun's Zenith for three, but the flurry of activity that followed had both his Clone Shells opened to reveal the Fume Spitter and Precursor Golem underneath, and Black extended the hand in defeat.