Round 6: Tanis Tramontin vs. Dan Li 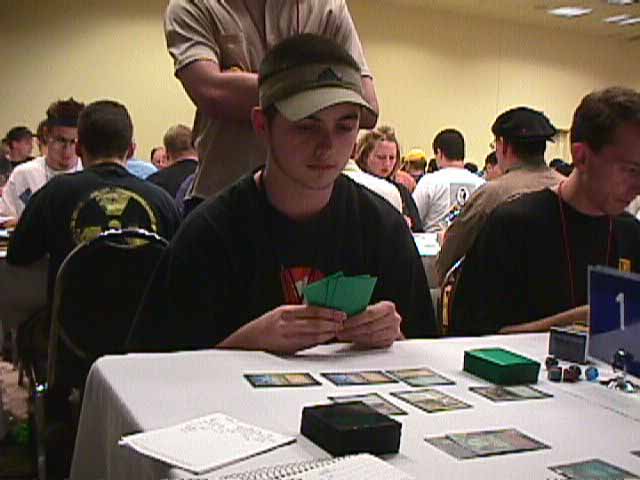 As the field separated into the good and the bad, the top few tables represented several popular deck types, as well as few uncommon ones. At table 1, Tanis Tramontin faced off against Dan Li. Both players were fairly young and located nearby, Dan being a local and Tanis coming in from Warren, Michigan. Dan is a seasoned player, though he doesn't compete in a lot of high-level tournaments. Travis just came off of a victory in a forty person Standard tournament, as had not lost a game coming into this match.

Tanis led off with turns one and two Mothers of Runes, severely limiting Dan's options. Dan played out a River Boa and follows it up with Rancor, hoping to get some breakthrough damage in. In the meantime, Tanis has cast a Defiant Falcon and searched for a Lin Sivvi. Dan cast a Troll, but the game was already looking like an uphill battle. Tramontin opted to cast a Glorious Anthem, rather than double search - a play that allowed him to go on the offensive. Li Rancored the Troll and attacked, but Tanis just searched out a Steadfast Guard for the block. Li Giant Growthed a few points through, but the Guard was protected by the Mother. Dan cast a second River Boa and Tanis took advantage, playing a Masticore and shooting down the Boa. Dan deliberated, but eventually paid the alternate cost on Invigorate to keep his creature alive. Even the extra creature and a fresh cast Pouncing Jaguar couldn't save Li, who was beaten on the next turn by a Defiant Falcon, Steadfast Guard and Masticore, the last two given protection from green. 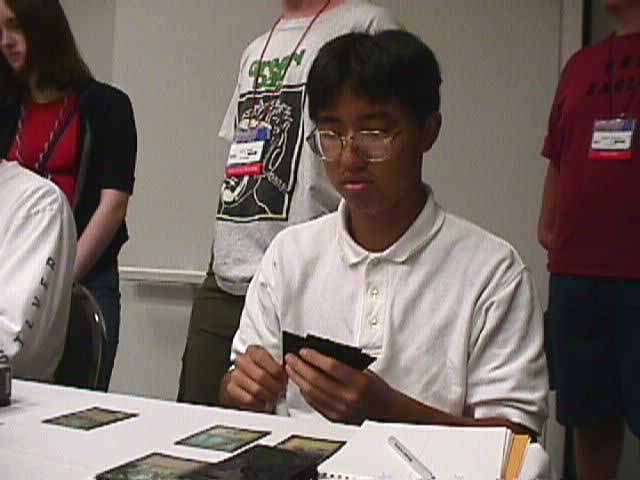 Dan drew his seven cards and tossed them on the table, upset. He quickly mulliganed. His second hand was somewhat better. He opened with a Treetop Village. Tanis again dropped a first turn Mother, eliciting a groan from Dan. Li cast a Boa, which was very solid, until Tramontin followed the Mother with a Longbow Archer, effectively halting the potential offense. Dan used a Tangle Wire to tap Tanis out, but Tanis just played another Plains and cast a Ramosian Sergeant. Dan played another Village and showed a little offensive muscle. Tanis used the chance to counterattack and play out a Steadfast Guard. The Wire faded away and Li dropped his coup de gras: Masticore. Tanis looked a little bothered, shifting his cards back and forth, then proceeded to draw and play Topple, must to the consternating of Li. Dan then dropped a Troll and an Orangutan to help defend, but it was too late. Tramontin play the Parallax Wave he'd been holding and continued his assault. Once he added a Crusade to the mix, Li scooped.