Round 6: Is There an Echo in Here?

players were 3-2 entering this round, so only one could advance. (Day One has 7 rounds, but there's a cut after Round 6 that requires at least 12 points to advance. Those that make it get to participate in the third draft of the day, then play the first match of that draft tonight, continuing play tomorrow until the cut to Top 8.) The two players chatted as they shuffled up their decks, but both were clearly thinking about what was at stake. Sam took the roll and decided to play first. I've heard some debate on the play/draw decision for this format over the last couple days, but when I asked Sam if he'd run into anyone choosing to draw first, he very quickly scoffed, "No, and they'd be an idiot! It's not even close!" 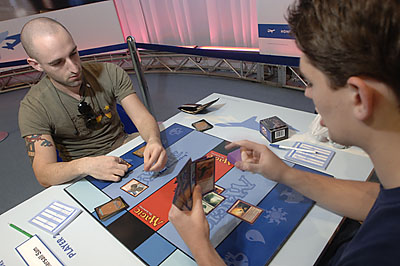 The first game set a blistering pace for what turned out to be a battle of two different base-red-green decks. Seeing the forests in play on both sides Sam joked, "Two green decks in the final for our table? Is that a first in this format?"

For Sam, it was Search for Tomorrow followed by Thelon of Havenwood, and then an impressive turn three Scarwood Treefolk. Paulo's first creature was a Viashino Bladescout, which sprang out to ambush Thelon. Sam followed up with Herd Gnarr and Thallid Germinator while his opponent continued to miss creature drops and was then forced to Psionic Blast the Gnarr, dropping to 6 in the process.

He then used Grapeshot to storm off the Blast, offing the Germinator. Looking a little more stabilized, Paulo sent in with his Bladescout, but a surprise Scryb Ranger flashed into play, untapping the Scarwood Treefolk, which blocked the 2/1 and sent it straight to the dumper. As if that wasn't bad enough, Sam showed his tapped out opponent a Griffin Guide! That prompted an immediate concession. Six minutes and that was that! 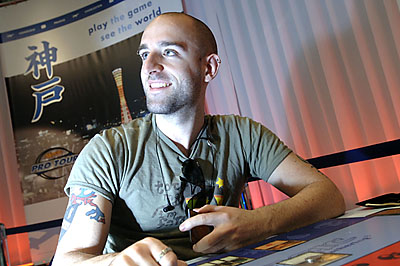 Larger than life, or at least dramatically lit.

In a normal match this probably would have felt quick, but at 10 minutes it was half again (or so) as long as the first. Sam had a turn-one Halberdier for suspendville, but Paulo had an absolutely absurd opening of Thick-Skinned Goblin followed by not one but two Hunting Moas. To exacerbate things, Sam didn't have a creature for turn two, and his turn-four Scarwood Treefolk had to start tapped, so he was way behind just four turns into the game. The Goblin was up to 6/5 in very short order, and Sam was down to 7 life. Sam did his best to hold on but was just too far behnd. The end came after a Mogg War Marshall made some tokens and was joined by a Pendelhaven Elder as Sam scrambled to catch up with Halberdier and a Gnarr on defense.

Paulo untapped and paused for some quick thought. Sam immediately asked "Am I dead?" and just as quickly Paulo replied, "Yep, I think so, but I'm just making sure." Paulo used the Elder to pump his weenies, sent in the team, and then instant-cast Sulfurous Blast to wipe out any potential blockers and the critical remainders of Sam's life total.

After the match, I asked about Paulo's fifth turn. Having decided he wanted to keep Moa #2 around for a bit, he paid the echo and then swung in with his guys. I asked if he'd just forgotten about Thick-Skinned Goblin's ability, which would have allowed him to skip any Moa echo and improve his absurd draw even more. Paulo took a moment and then shrugged sheepishly, admitting he didn't even realize the creature's ability at the time. All in all, I thought Sam took that news very impressively. 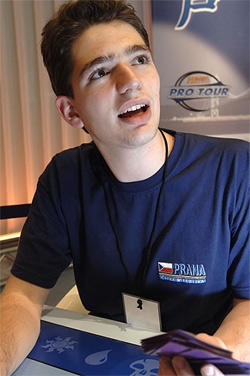 Look there! In the distance!

This one came out quick again, with a suspended Halberdier, Thelon of Havenwood, and Herd Gnarr for Sam against Greenseeker, Gemhide Sliver, Undying Rage on the Greenseeker, and then Durkwood Tracker for Paulo. Sam's Halberdier came into play and led a desperate-looking alpha strike, but when the Tracker blocked Thelon, a Stonewood Invocation sent the Tracker to the graveyard. Paulo, totally composed, sent all his own forces in, making it 10-10, then paused to consider for a moment. Playing a Desert, Sam picked it up and read it, then made a very displeased face.

"That's pretty [something or other] good!"

Then Paulo tapped all his land, including the Desert, drawing an "Ah, ok." from Sam. But then Firemaw Kavu changed that to: "Oh. Yeah, sure. [pause] Um, good game?" Understandably shaking his head, Sam wasn't quite ready to give up, though. The Halberdier went bravely in, offing the Kavu, which then sent Thelon to the graveyard. But, with 6 mana up, the Englishman had to pass the turn.

Paulo made things even worse, playing Subterranean Shambler to wipe out the Halberdier, then a Suq'Ata Lancer. Everything that could attack charged at Sam, who had Sudden Shock for the Lancer but nothing else, dropping down to a precarious 7. Pulling off the top card and needing a lot of help, Sam saw another land, sending Paulo to Day Two and Sam off to the side drafts. With a friend watching nervously who quickly came in with the big high-five, Paulo was clearly very excited to be making it to Day Two. If he can keep drafting decks like this one, we may see him getting even more high-fives tomorrow night.