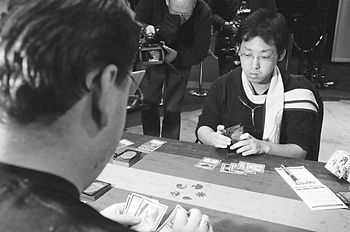 Shouta Yasooka looks to unearth a win.Luis Scott-Vargas needs no introduction, as he is quite possibly the hottest player on the planet right now, with Pro Tour–Berlin, Grand Prix–Atlanta, and Grand Prix–Los Angeles under his belt as champion. His opponent, Shouta Yasooka, is no slouch himself, with a team Pro Tour win at Charleston in 2006 along with nine GP Top 8 appearances. The two masters brought very similar decks to the table, with a lightning-fast curve of unearth horrors in Shouta’s deck against Scott-Vargas’s slightly more controlling flyers build in an Esper base splashing everyone’s favorite villain, Nicol Bolas, Planeswalker.

These two undefeated players were the first to the Arena to battle, eager to show themselves as expert at Limited as they already have at Constructed. As they sat down to shuffle, both looked around.

“A judge mentioned we should wait, maybe for a deck check or something?” Scott-Vargas thought aloud, as Shouta nodded and continued scanning the area. “Not sure.”

When no judge was forthcoming, the two agreed to begin and their pace quickened to incredible speed. They weren’t impatient; they were just returning to their natural play speed of “crazy fast.”

LSV got off to a good start with Tidehollow Strix, the first of many. Shouta replied with a Kathari Screecher on his third turn, and that bird was joined by a duplicate the next turn. Scott-Vargas brought out one of his two Scornful Æther-Liches and the two traded blows for a bit, until Shouta was convinced to trade his second Screecher for the Tidehollow Strix. The Screecher was quickly replaced with two of Shouta’s own Tidehollow Strixes.

Scott-Vargas slowed down his lightning quick pace the turn after he played Kiss of the Amesha to reload to a healthy 21 life. He pondered his options and came to a decision, playing out Tower Gargoyle. Shouta matched the Tower Gargoyle with his own 4/4, a Grixis Slavedriver. Shouta got rid of the Æther-Lich using Wretched Banquet, as it was tied among a large number of 2-power creatures. He then swung in with double Tidehollow Strix and his Slavedriver. That attack brought Scott-Vargas down to a precarious 7 life, but he cracked right back, bringing Shouta to 6.

Scott-Vargas’s hardcast Resounding Silence on Grixis Slavedriver looked like it could barely keep back the tide, since the remaining flyers took him from 7 down to 1. Scott-Vargas carefully untapped and attacked with his Tower Gargoyle and Faerie Mechanist, but what appeared at the start of the turn to be the game-winning attack halted in confusion. Shouta believed this attack took him to 2 and Scott-Vargas was sure it took him to 0, but rather than argue, Scott-Vargas showed his Absorb Vis for the win to move things along. The entire game, including the discussion at the beginning and the end, took less than 5 minutes. 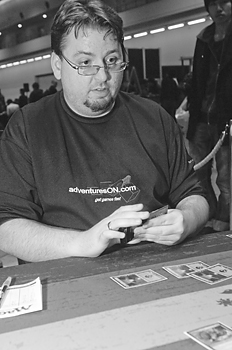 Luis Scott-Vargas comes into this round at 5-0, continuing one of the more impressive runs in recent memory.Game 2

Both combatants clearly understood the importance of tempo in this speedy beatdown matchup, mirroring their own quickened pace in game play. Shouta kicked off the second game just as quickly, with Dregscape Zombie and Tidehollow Strix before Scott-Vargas could play any spells at all. Scott-Vargas was hurting for lands, forced to discard his Grixis Slavedriver before finding a third land on turn four off a Yoked Plowbeast cycle. Obelisk of Esper put some color into his mono-Swamp draw, but his Fleshbag Marauder took care of only Shouta’s smallest threat, the 2/1 Zombie, while Brackwater Elementals #1 and #2 joined the fray ready to chow down on Scott-Vargas’s life total.

Scott-Vargas finally looked to be stabilized after “chumping” the second Brackwater with Darklit Gargoyle off a newly drawn Obelisk of Esper, having cleared the board of regular Zombies and Horrors (but with reanimated ones still looming in his future). Scott-Vargas played a Tidehollow Strix followed by a Sedraxis Alchemist bouncing Shouta’s remaining creature, a Tidehollow Strix. That gave Shouta the perfect opportunity to play his Infest, however, wiping Scott-Vargas’s board. Agony Warp took care of the unearthed tag-team of Brackwater Elemental and Dregscape Zombie; however, Scott-Vargas was at 2 due to his early game stumble in the face of early beats and his odds against the inexorable tide of Shouta’s agression did not look good. Indeed, Shouta took it home with his previously bounced Tidehollow Strix on the next turn when Scott-Vargas could not find another flyer. 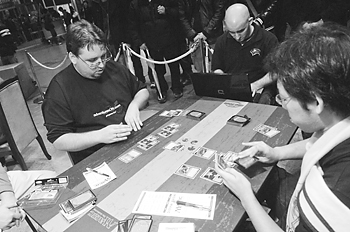 Two Magic powerhouses go head to headOut of the gates for the third game, again at a pace that bordered on the theoretical maximums of human gamer capability, Shouta had Kathari Screecher and Brackwater Elemental while Scott-Vargas developed his mana with Obelisk of Esper. Scott-Vargas did his best to slow things down with a Tower Gargoyle to hold the fort against Shouta’s Screecher, but he still took 4 from the Brackwater. Grixis Slavedriver arrived for Scott-Vargas shortly afterward, cementing his hold on the game’s tempo.

Shouta and his team from Tidehollow would not be denied, however, and he continued to press on with a Volcanic Submersion for the Tower Gargoyle, and his Kathari Screecher and its twin soon brought LSV down to 12. Shouta’s newly cast Fatestitcher made it difficult for LSV to race since his Grixis Slavedriver continued to become tapped at inopportune moments, and even a Kiss of the Amesha only granted him a couple of extra turns of respite.

Luckily, he found a Resounding Wave to turn the tide and cycled it to return Fatestitcher and Twin-Kathari back to Shouta’s hand. Scott-Vargas firmly regained the tempo as his Grixis Slavedriver surfed in right behind the Wave to bring the life totals to 13-7. Shouta replayed his Fatestitcher but was forced to bounce the Slavedriver with Call to Heel on the attack to buy himself a bit of time, adding a Zombie token to the field. LSV played a Darklit Gargoyle and recast his Grixis Slavedriver, threatening quite a bashing for Shouta next turn.

When Shouta passed the turn with six mana up, Scott-Vargas paused and considered his options. On Shouta’s end step, he played Agony Warp to get rid of the tapper, but Shouta replied with Skeletonize. LSV calmly untapped, summoned a Blister Beetled to off the Skeleton token followed by a Fleshbag Marauder sacrificing said Beetle to kill Original-Screecher and bashed across the undefended red zone to take Shouta to 2. He finished up with Relic of Progenitus, an amazing weapon versus Shouta’s unearth-heavy deck, immediately popping it for a card and both graveyards. Shouta played his own Tidehollow Strix and his own Blister Beetle to take care of the Marauder, but that only stalled a turn and converted the Slavedriver into a Zombie token.

Shouta tried desperately to hold his ground with Brackwater Elemental, but when Scott-Vargas played Executioner’s Capsule and popped the blocker, then unearthed his Slavedriver, he and his remaining Blister Beetle were swept away.