Round 6: Tsuyoshi Douyama vs. Itaru Ishida

Tsuyoshi Douyama hasn't had the easiest road today. Just coming back to the game, he's already faced Jin Okamoto, and now sits across from the Prince of Ponder, Itaru Ishida. What's worse, they're in a red-white mirror. The winner of this match will sit pretty at 6-0, while the loser will have to console themselves with 5-1 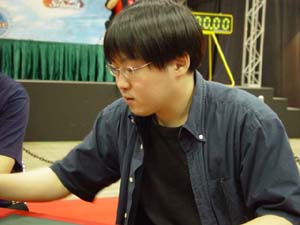 Ishida kept a two-land hand without hesitation. Douyama was more reticent, but set his jaw and kept. Ishida pulled his third land just in time for a morph. Douyama cycled away a Dragon for his third land, and dropped Wing Shards on the incoming facedown. Ishida brought the beats with a pair of Silver Knights while Douyama cycled to more mana.

His morph watched him take four more damage, but then the Angel in waiting was enough to keep Ishida's troops home. It got in for damage, and was protected by an Astral Slide. However, after Douyama regrew his Dragon, Ishida was able to force him to tap out to save his Angel from Wing Shards, then Vengeanced away the board on his turn.

Douyama came back with Silver Knight and Lightning Rift, but that was nothing compared to Ishida's Akroma, Angel of Wrath. Douyama untapped and frowned. He made an Astral Slide and passed it back. Ishida was holding Decree of Annihilation. Rather than cycle it precombat, he swung in. Naturally, Douyama had the Wing Shards. Now Ishida had no offense, and Douyama was regrowing his Dragon and putting it into play. He even had a Decree of his own, and didn't wait to cycle it and earn the concession.

Ishida's Silver Knight played the role of Energizer Bunny in Game 2. It came out early and started hitting while Douyama cycled some lands and a pair of Dragons. Ishida was busy cycling too, getting rid of Starstorm and Akroma's Vengeance while looking for more land. He got the double-Temple draw for big acceleration.

Douyama needed respite and tried an Astral Slide. He saw Ishida cycle Decree of Annihilation in response. He took a lot more pain before he hit Wing Shards. He made a morph but was tapped out, enabling Ishida's second Vengeance. From there, they settled into a game of draw-go. Douyama played out a pair of Astral Slides. Ishida made him start cycling with Akroma, Angel of Wrath. He held back when Douyama had Wing Shards mana open.

Douyama didn't like his way, and so Oblated one of his own Slides. He cycled Ishida's Akroma out at end of turn and tried one of his own. Ishida Oblated it. He got to hit for another six, leaving Douyama at two. He added Eternal Dragon to his side of the board. Douyama made a morph and passed it back. Ishida showed him a Wipe Clean on Astral Slide, forcing his Akroma's Vengeance.

Now it was Ishida in the driver's seat, with his abundance of mana. He brought back his Eternal Dragon while threatening Wing Shards. Douyama's Akroma stayed home. Ishida Vengeanced it away. Then it was his Dragon against Douyama's Exalted Angel. Douyama Oblated the Dragon, then cycled Decree of Annihilation. Ishida made two soldiers with Decree of Justice before his lands disappeared. 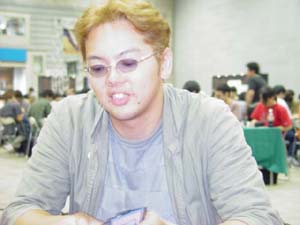 He had two land in play before Douyama had one, and cycled his Dragon to get the last plains out of his deck. Douyama looked at the three untapped mana and chanced it. Down came the Wing Shards. Ishida played a morphed Angel, and that was enough to get Douyama to concede.

Douyama had a turn-four Angel in the deciding game, but didn't dare swing with it out of fear of Wing Shards. Still, Ishida's inactivity meant he could recurse his Dragon until Ishida was willing to act. At six mana, Ishida Vengeanced away the board. Douyama bounced right back with Akroma. He held back on the next turn. Ishida Oblated it, hoping that his own Akroma would stick. Douyama had an Oblation of his own, though, so they were back where they started.

Worse, Douyama had a second Akroma in hand, eager to bash. Again, he held back while Ishida had open mana, choosing to make a morph instead. When Ishida cycled Wipe Clean at end of turn, Douyama struck, cycling Decree of Annihilation. Ishida packed up his cards.