Fujita's deck has carried him to a 5-0 record so far. The key to the deck for him are the Goblin Matrons which can him anything he needs. He does not think the deck will translate well to Block Constructed because of the lack of the matrons as well as not having the Sulfurous Springs—its straight Goblins for Fujita in block!

At international events such as these there are some communication issues that need to be addressed to determine the heads and tails of the coins. Finally, Fujita won the flip and elected to play. 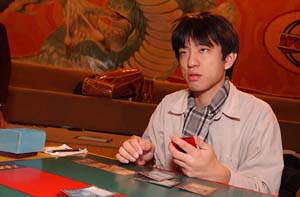 Fujita made a dramatic performance of looking at each card and elected to keep. He opened with a Prospector but Jetchan drew first blood with Raging Goblin. A Sledder joined the party but there was no blocking the Rager. Goblin Warchief came down on turn three and Fujita attacked for four.

Jetchan played a Burrows and passed the turn without attack. Fujita played a hasty Goblin Sharpshooter and killed the Raging Goblin. A Goblin Matron found a Siege-Gang Commander and Fujita passed back the turn. Violent Eruption did little but force Fujita to sacrifice two goblins and get two activations for his Sharpshooter.

When he attacked with Siege-Gang and everyone else, Jetchan conceded.

Jetchan brought in close to a dozen cards. They included Gempalm Incinerator, Clickslither, Earthquake, Starstorm and Slice and Dice. He took out an assortment of cards including Ensnaring Bridges and Grafted Skullcaps. Jetchan mulliganed while Fujita smiled at the two Matrons in his hand—no doubt planning on getting Gempalms of his own.

Raging Goblin came out on turn one and his next draw yielded the second land he was hoping for, which he used to cycle a Gempalm when Fujita attacked with his turn one Sledder. Goblin Warchief was Volcanic Hammered and a Goblin Matron found an Incinerator. Another Raging Goblin came down and it traded with the Matron. Gempalm cycled on the next turn to kill the remaining Portal goblin.

Fujita played a Siege-Gang Commander but Jetchan had an Earthquake and cast it for three to do the extra damage. Fujita had another Siege-Gang but Jetchan was out of gas. He attacked for five and Matroned up another Commander which loomed in his hand should Jetchan deal with the present one. A Grim Lavamancer was Smothered and Fujita was able to finish his opponent off any number of ways.