Round 6: 'Two Masters Going At It'

were the words of Dave Williams after the match, who was in good spirits Friday. This is as it should be; given all of his exploits in this and other games; he has earned himself the right to kick back and have some fun. 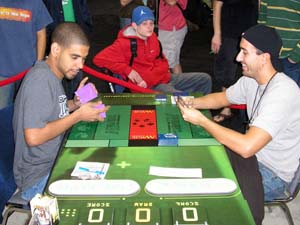 Williams and Pacifico faced with elimination on the line.

Andrew Pacifico also had a good outlook. I may have covered consummate professionals in Round 3, but this is my kind of Magic: Everyone cracking jokes, smiling, chatting about previous rounds. At the end of day, we have to remember that we're here getting paid to play a game and we forget it at our own peril.

Dave may be quite the man of the world, but he still takes the time to be impressed by our advanced feature match table technology. Or maybe he's just good enough guy to fake it. A first-game mulligan never happened to a nicer guy. You'd be hard pressed to know that both are on the brink of elimination. One of them won't survive this match.

Dave tried to play a land from his six-card hand but was quickly interrupted by Pacifico, who reminded him that he too had the right to draw a bad hand and throw it back for six new cards.

Both opened with fetch lands, Dave going for Overgrown Tomb on his way to a second-turn Watchwolf while Pacifico went for an old-fashioned Mountain and Skirk Prospector but failed to make his second land drop. Seeing that, Dave used to take out the Mountain and Andrew got a smile out of peeling a Wooded Foothills off the top even if he couldn't cast any spells without at least two mana.

A Duress showed Williams what was in store for him if the mana hit, which he described as "not a traditional Goblin deck" packing Duress and along with a Goblin curve stretching up to four mana. That land never arrived and Williams took Pacifico out of the game quickly.

During shuffling Dave took the opportunity to get an update on Magic's latest and oldest formats as I gave him and Pacifico the rundown on Legacy and Vintage. Other information would not come to him as cheap: After Pacifico played a first-turn Sparksmith off a Chrome Mox, Dave used a fetch land to get an Overgrown Tomb to cast Duress, only to find a Goblin Matron and Goblin Piledriver but no spells he could take away. As he said, he just wanted to know what was up. 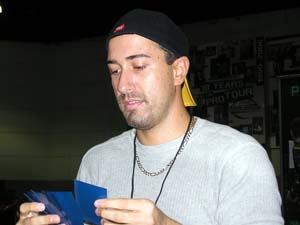 A second-turn out of the sideboard emptied Pacifico's hand, leaving behind the Sparksmith and Piledriver. Watchwolf contained the ground while Pithing Needle stopped Sparksmith from clearing a path and contained Goblin Warchief. Another stopped a topdecked second Piledriver, despite Pacifico's protests that it has Protection from Blue. Which it does.

Finally he sacrificed two of his Goblins to get five mana and put out his card-advantage engine: Kiki-Jiki, which started copying before being taken out by Flametonge Kavu. A second Pithing Needle pre-emptively shut off Siege-Gang Commander but a answered Williams' .

Of course, as soon as the Cloak was gone he drew his best Cloak target: Mystic Enforcer, a 6/6 flyer with protection from black. Pacifico had the larger army, but it couldn't win in a fight because his creatures couldn't use their activated abilities. Pacifico drew and shook his head in disgust. Then of course he played a hasted Goblin Sharpshooter and attacked with everyone including the Warchief that allowed the Sharpshooter to tap. What a lucksack!

Even Luckier for Pacifico, neither player realized that if the Warchief died in combat the Sharpshooter will lose haste and Williams would have gotten to attack back for the win. Instead, Pacifico talked Williams into conceding before anyone tried to perform an illegal action. Pacifico could still have won if he'd realized the problem - if he holds the Warchief back, he has just enough damage to kill Williams even if he blocks correctly.

"Neither of us wanted to win. He tried to give it to me, and I gave it right back," said Williams, a sentiment to which Pacifico readily agreed.

Williams opened the game at seventeen in order to get a first-turn Kird Ape and red mana - you can get your color, but that doesn't mean it is cheap. Pacifico paid just one life for his Mountain and Skirk Prospector, after which Williams played the Forest to enlarge his Kird Ape and slapped down an Umezawa's Jitte. It seemed that in such creature matchups, this is a rather good artifact to have on your side. 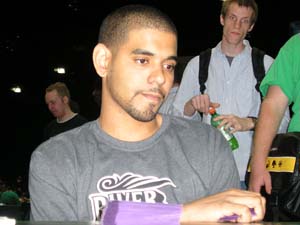 "If you just sit here for 24 more minutes…" answered Williams.

"You could just give it up. I did last game."

"I just might do that. Bash you for one."

The Skirk Prospector kept the Jitte from getting counters, as Pacifico sacrificed the Piledriver for mana to keep the Kird Ape from dealing combat damage. Pacifico went for a Swamp and Dave announced the presence of a in Pacifico's land. This is a blatant lie, as I can see since I have a view of Pacifico's hand; does Williams have a bad read, a good joke, or is he trying to figure out if the is there?

When Pacifico tapped out for Goblin Warchief, the answer was clear. A cleared away Skirk Prospector, allowing the Jitte to take out the Warchief. A Gempalm Incinerator went after the Kird Ape but came home having done nothing other than worry its controller for a second, and the Jitte continued its march as a Pithing Needle on Skirk Prospector prevented Pacifico from making another ritual sacrifice to the dagger of doom. Hey, it works if neither player knows it doesn't!

Williams even blew up the only Swamp in Pacifico's deck, and when an joined the Umezawa's Jitte, Pacifico finally gave up the ghost.