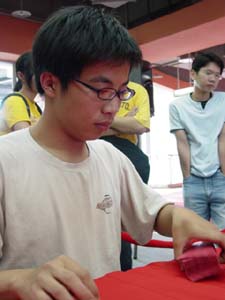 This round saw a pair of Taiwan's lesser known commodities face-off at 5-0. Wen Jien Hwang is running a souped-up red-green deck that has a secret weapon should something go wrong: Ensnaring Bridge. An abundance of burn lets him win at his leisure. Kang Nien Chiang is playing a Green-Blue-Red Squirrel-Opposition deck that draws added firepoewr from Phantom Centaur.

The match started in a flurry of action. Chiang led with Birds of Paradise, promtly Hammered by Hwang. He bounced back with Mongrel, then Fiery Temper for Chiang's Call of the Herd. Chiang's next play was no pushover: Phantom Centaur. Hwang put the brakes on with Ensnaring Bridge. Chiang flashed the Call back and waited.

A Flametongue Kavu took out the token. Chiang added another Centaur. He countered Hwang's Lavamancer, but then started feeling the pain. Successive Violent Eruptions went straight to the face. A newly-drawn Firebolt, and Chiang was at five. Browbeat naturally resolved. It turned up a Temper and Lavamancer. Chiang, with no counter or burn, was forced to concede.

For Game 2, Chiang kept a gassy one-lander with just one flaw: No green mana. He was soon forced to discard Llanowar Elves, and after Hwang opened with Mongrel and Call of the Herd, Chiang packed it in, disheartened at his foolish decision.