"Can I sleeve up this one?" Brian Kibler asked as he sat down for the match, gesturing toward his Extended deck. Kibler's squad brewed up a Doran, the Siege Tower list that put up impressive-looking numbers for Day 1's Constructed portion, and his enthusiasm for the deck was plainly evident.

"I think you want to play with forty," responded Nelson.

"Your deck not very good?"

Nelson's humility belies an impressive string of consecutive Top 8 finishes over his last several events—a Pro Tour, two Grand Prix, and U.S. Nationals—a testament not only to his thorough preparation, but also to the intensity and focus he brings to every match.

"It's so quiet in here," Kibler said, noting the palpable tension in the arena as all six players shuffled. "I'm going to change that."

"You have Brian Kibler, Brad Nelson, Zac Hill, and Conley Woods all within like fifteen feet of one another," chimed in a spectator. "There's no way things could ever stay quiet." 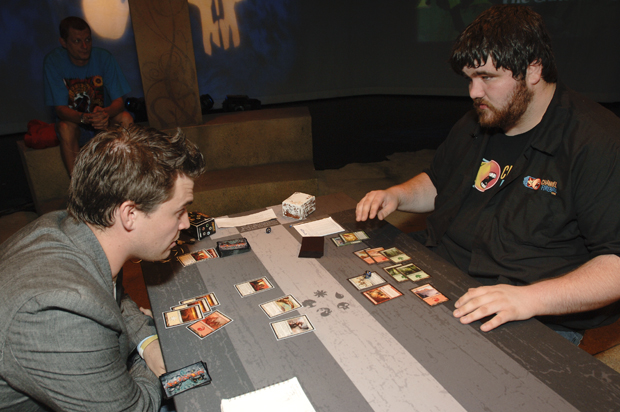 Brian kept his word, and soon the conversation evolved into a discussion of how savage Nelson's draft deck would be against the actual card Doran, the Siege Tower ("Awakener Druid, get ya!") Soon, however, the players had shuffled up and kept both their hands.

Brad led with a Forest, but Kibler was first out of the gates with one of his deck's four copies of Infantry Veteran. Nelson trumped the Veteran with a Fauna Shaman, but it bit the dust to a Lightning Bolt after Kibler untapped and played a Mountain. A second Infantry Veteran joined the first, and Nelson fell to 19.

Brad's third turn, however, saw a Prodigal Pyromancer hit the battlefield—a huge threat against Kibler's board of one-toughness creatures.

"What's this do?" Brad jokingly asked as he pretended to pick the card up and read it.

"Nothing," Brian said and tossed it casually into the graveyard. It didn't stay there for long.

Kibler could only untap, play a land and a Wild Griffin, attack for two, and pass. When Brad cast Cultivate for a Forest and a Mountain and killed Infantry Veteran with Prodigal Pyromancer, Kibler's back was against the wall.

Kibler kept up the fight, though, attacking Nelson to 14 and keeping up the pressure with a War Priest of Thune. Brad played a sixth land and went into the tank.

Brian played a fourth land and contemplated his options. "You have every card I don't want to play against," he said. "Do you have a Pyroclasm too?"

This combat came at a crucial phase of the game. Brad didn't want to waste either his Pyromancer activation or his Triskelion counters only to get blown out by a combat trick, and Kibler would risk losing his team to Nelson's direct damage should he pull the trigger too soon. Finally he decided to attack with Wild Griffin, keeping Infantry Veteran untapped and taking Brad to 12.

Brad killed a Veteran on Kibler's end step and attacked with Triskelion on his turn, taking Brian to 16. Nelson added to his pressure with Canyon Minotaur, but it promptly ate a Pacifism on Kibler's next turn. Once again Kibler attacked with both of his creatures—the War Priest and the Griffin—but this time Nelson shot the Wild Griffin with a Triskelion counter inside combat. Kibler responded with Inspired Charge, and Nelson responded to that by removing another counter and using his Pyromancer to kill the Griffin. The attack took Nelson to 8.

Nelson untapped, battled with Trike, and played a Giant Spider to hold off the War Priest. Not to be outdone, Kibler topdecked a Blinding Mage and played it immediately. Nelson hit Kibler to 13 with the Pyromancer at Kibler's end step, then attacked with Giant Spider, taking his opponent to 11. Brian used a Triskelion counter and a Pyromancer activation to kill the Blinding Mage, then closed with a massive Yavimaya Wurm.

"I feel like my window is closing," Kibler said. 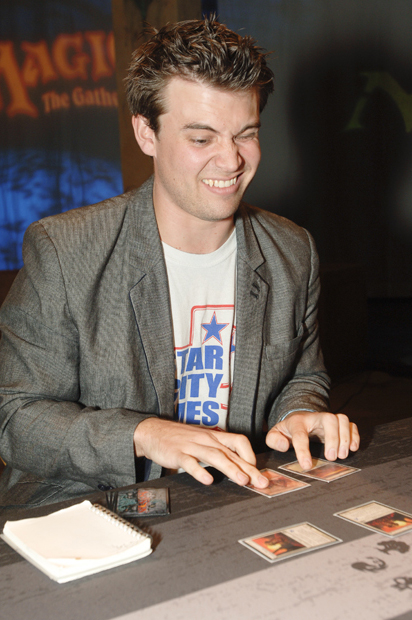 This is the face Kibler makes when a window closes.

Kibler attacked with War Priest of Thune, and Nelson chump blocked with Triskelion, saving precious life points should Kibler have something like a Lava Axe. A counterattack by the Wurm and the Spider took Kibler down to 3, and Nelson simply passed the turn. When Kibler attacked with War Priest yet again, Nelson continued to play conservatively, blocking the Priest with his Pyromancer and taking Kibler to 1. Seeing no outs, Kibler scooped.

"Not going to lie," Nelson said, "I kind of wanted you to be playing that deck."

"I think I would have won had I not Bolted your Fauna Shaman." Kibler said, eliciting a skeptical look from Brad.

Kibler started this game off with a mulligan.

"You've now had a chance to personally witness the run-goods of Brad Nelson," said Brad Nelson after keeping his opening hand.

Kibler kept his six-carder and led with a Plains. Nelson retaliated with a Forest and a Llanowar Elves.

"It gets way worse," Nelson said.

Kibler's turn two was a War Priest of Thune, but Nelson's second turn proved to be another Llanowar Elves and a Fauna Shaman. When War Priest got in the red zone, Nelson instantly threw his Shaman in the way.

"That might be the only time you ever see that happen," said Conley Woods from the sidelines.

The two "Bears" did actually trade. Kibler followed up with an Infantry Veteran and an elite Vanguard, but Nelson continued to pump gas into his tank with Cudgel Troll.

An attack from the Vanguard plus a pump from the Veteran brought Nelson to 17, since Nelson was reluctant to lose his Troll to a burn spell. Nelson's reticence passed after he untapped, however, smashing Kibler down to 14 with a swing from the team. He concluded his turn with an actual Bear, Runeclaw Bear. 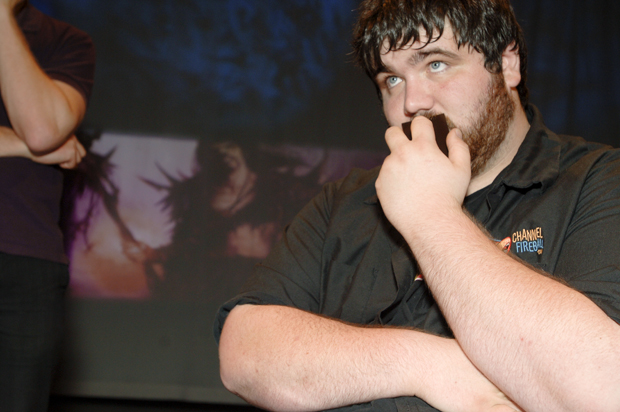 Kibler drew a card and considered his options. Finally, he tapped all his mana to Fireball both of Nelson's Llanowar Elves—a devastating play, since Nelson was stuck on three land. Still, the Cudgel Troll was a problem, and Nelson maintained the offensive with another attack, bringing Kibler to 10. Kibler drew another card and once again thought a long time before playing a Mountain and passing the turn—he didn't want to trade Elite Vanguard for Grizzly Bear. Yet again, Nelson untapped and attacked with Cudgel Troll.

Kibler's next turn saw an Assault Griffin, and Nelson remained stuck at three land. He had tricks, though. A slow-rolled Pyroclasm wiped Kibler's board, and although Kibler used Fling to tap Cudgel Troll for a turn, the War Priest of Thune and Infantry Veteran that followed were no match for Nelson's fresh Awakener Druid. An attack from Forest, Troll, and Druid sent Kibler to 1 after Kibler chump-blocked with both of his creatures. It looked like Kibler would enjoy one more draw step to try and topdeck an out...

"Hornet Sting you," Nelson said, and the crowd erupted.

"I didn't want to ask him, 'What are you at?'" said Nelson to the spectators after the match. The competitors had shaken hands and were getting ready to leave.

"Oh, I would have done it to you in an instant," said a smiling Kibler, packing up his cards.