Round 6: When Playing Costs a Card

Countrymen and long time friends Shuu Komuro and Shuhei Nakamura exchanged light-hearted banter as the round begun. Nakamura won the die roll and opted to play. He managed to remain jovial even as he threw back his opening hand and shuffled up for a mulligan.

Nakamura pondered hard before deciding to keep his second hand of six cards. He opened with Kithkin Harbinger on turn three, and searched for Wizened Cenn. 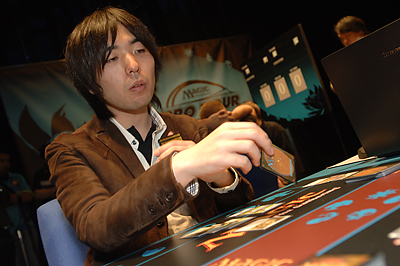 Shuhei Nakamura is dapper as always.Komuro laid a land and passed the turn, and his gambit paid off when he was able to counter Nakamura's Wizened Cenn with Broken Ambitions, when his opponent whiffed on his land drop. Komuro continued to leave mana open on his turn, and after Nakamura added Kithkin Healer to his board, Komuro played Inspired Sprite.

The damage from the Sprite allowed Komuro to build on his card advantage by playing Latchkey Faerie with prowl. He then added Amoeboid Changeling to his growing army of Faeries. Nakamura managed to remove Inspired Sprite with Weight of Consciousness, but Komuro kept up his stream of Faeries with Fencer Clique.

Nakamura played Plover Knights and hoped the first striking flyer would be sufficient to stop Komuro's flight of Faeries. But Komuro had the answer in a main phase Nameless Inversion, and he continued to pound Nakamura with his Faeries.

Inkfathom Divers for Nakamura revealed three lands and Triclopean Sight. Despite not having an answer to the flyers he faced, Nakamura simply maintained an unreadable mask and placed the spell on top of his deck. Just moment later, when his last shot at a damage race evaporated with twin Peppersmokes from Komuro, Nakamura scooped.

In spite of the gathering crowd, the two famed Japanese wizards appeared unaffected by the attention, calmly shuffling up and concentrating on their play.

This time, Komuro had to mulligan, and the reality of the competition begun to show in the pained look that flickered across his face.

Despite being on the draw, Nakamura had the first play of Kinsbaile Skirmisher. He tried to follow through with Kinsbaile Borderguard the next turn, but Komuro countered it with Broken Ambitions. Komuro then added the first creature to his board, a Moonglove Changeling.

Nakamura proceeded to attack and play Surge of Thoughtweft to cycle through his deck. The jostling for an edge in the game continued with Komuro playing Skeletal Changeling, and Nakamura had the first breakthrough in Plover Knights.

Nakamura's edge increased when Komuro got stuck on stuck on four lands and had to evoke Mulldrifter just for the two cards. Nakamura continued to consolidate his board position with Inkfathom Divers.

Finding his land, Komuro lapsed into deep thought, shuffling his cards in front of his face while Nakamura sat impassively with his arms folded before him. Finally, Komuro played Violent Pall on Infathom Divers. When Nakamura next swung with his creatures, Komuro had his Moonglove Changeling trade with the Kinsbaile Skirmisher to stem the bleeding. But Nakamura did not let up in his onslaught and added a second Plover Knights to his army.

Komuro had Fencer Clique, but that wasn't about to stop Nakamura's first-strikers. When Komuro chose not to block, Naramura played Surge of Thoughtweft and Triclopean Sight to bring Komuro from 9 life down to 0.

Komuro was clearly feeling the heat as he brooded on his decisions during boarding. In contrast, Nakamura was the picture of efficiency as he ran through the routines of running through his deck and shuffling. Yet perhaps Nakamura wasn't as calm as he seemed, for he shuffled some cards upside down and had to reshuffle. 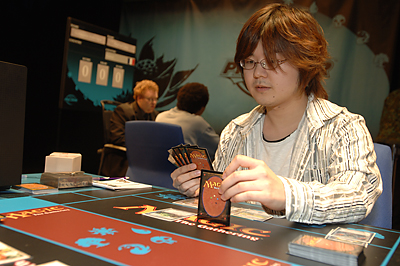 Shuu Komuro rocks his own style.Nakamura's first hand gave him a lone island in a sea of white. Throwing back the hand, Nakamura gave a wry chuckle when he drew a second hand that had a plentitude of land, but little threats. Nonetheless, he decided not to chance a second mulligan.

This time, Komuro had the first play of Moonglove Changeling. Nakamura answered with Stonybrook Schoolmaster, and saw a glimmer of opportunity when Komuro missed his fourth land drop. He charged on with Order of the Golden Cricket and swung with everything when Komuro failed to find a land.

Komuro made the obvious play of Moonglove Changeling blocking Stonybrook Schoolmaster, and Nakamura targeted the Changeling with Coordinated Barrage before damage. He was clearly playing around the twin Peppersmokes Komuro used in game 1, and his fears proved true as Komuro forced a trade by killing the Merfolk token with Peppersmoke.

Komuro drew his fourth land but continued to pass the turn without making any plays. Nakamura played Kithkin Harbinger and searched for Kinsbaile Borderguard, while Komuro played Inspired Sprite at end of turn.

During his main phase, Komuro activated Inspired Sprite and discarded Broken Ambitions, which wasn't very relevant given that Nakamura had a lot more mana than him. He then played Skeletal Changeling and activated the Sprite a second time, discarding Mulldrifter, which hinted as to the strength of his hand.

Nakamura played the Borderguard and sensing the urgency to end the game before the strength of Komuro's hand could take the game, swung with both his Kithkin. At the end-of-turn, Komuro played Pestermite and tapped the Borderguard.

Komuro then swung in with everything, and Nakamura played Triclopean Sight on Kithkin Harbinger, allowing him to gain an inch of board advantage by blocking and killing Skeletal Changeling. Komuro then dropped the bomb of a prowled Notorious Throng. On his free turn, Komuro increased his board advantage by sending Kithkin Harbinger back with Æthersnipe, and increased the life lead he had over Nakamura as well.

Nakamura was lagging in almost all aspects of the game, and he lapsed into deep thought about his options. Chewing on his lips unconsciously, Nakamura gave periodic signs before attacking with his Borderguard. When Komuro blocked with Æthersnipe, Nakamura played Surge of Thoughtweft to force the trade. He then replayed the Harbinger and looked for another Surge of Thoughtweft. Finally, Nakamura removed Inspired Sprite with Weight of Conscience.

Passed the turn, Komuro attacked with Pestermite and three tokens to bring Nakamura down to 3 life. In a last ditch effort, Nakamura counterattacked with all his creatures, and scooped when Komuro showed him the Violent Pall.