Round 6: William Jensen vs. David Humpherys 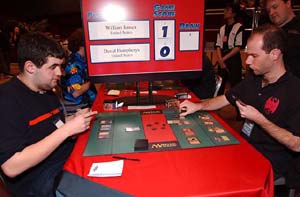 This match saw two of New England's finest square off against each other. Both players have Grand Prix victories and Pro Tour Top 8s, and are looking to build on their Magic careers with another great performance this weekend. So far they're on track with 4-0-1 records. The winner of this match will be in prime position to make a run at Top 8 tomorrow.

Baby Huey had a great start, with a second turn Angelic Wall and third turn Cephalid Looter. Jensen decided to bash with the Looter for two, and brought out Mystic Zealot. Humpherys summoned Springing Tiger to stop the ground attack, but Jensen went to the air with Balshan Griffin. The Griffin died to Thermal Blast, but Jensen netted some significant card advantage with Concentrate. The Looter kept working to get Jensen closer to threshold, so his Zealot could start flying over for damage. Meanwhile, Humpherys fortified the ground defense further with Metamorphic Wurm. A second Zealot soon joined Jensen's side, and things were looking bad for Humpherys.

Springing Tiger attacked and was blocked by Angelic Wall. The wall came crashing down thanks to Muscle Burst, and Humpherys brought out Werebear. Humpherys' side had potential to be scary, since his three creatures could all become huge once threshold was reached, but at the moment he only had two cards in his graveyard. Thanks to a Looter, Jensen was already at threshold and came over for six with the Zealots, and then played Kirtar's Desire on the Wurm. Humpherys swung with the Tiger and Bear, and then brought out Kamahl, but Jensen had Syncopate. The Looter then received a Psionic Gift and took down the Werebear, both Zealots attacked for another six points of damage, and Aven Windreader was summoned. With very few resources and no way to handle the nine points of damage per turn, Humpherys conceded. 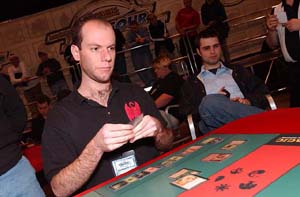 Jensen had to mulligan his opening hand, and the resulting draw wasn't much better. Jensen found himself stuck at three lands, while Humpherys played Cartographer, Krosan Archer and Chainflinger. The amount of tempo being lost was significant, but Jensen tried his best to keep up, playing Kirtar's Desire on the Archer, and summoning Angelic Wall and Nomad Decoy. Regardless, a fourth land never came, and Jensen was simply overwhelmed by Humpherys' constantly growing army.

While shuffling, Jensen noted "I'm a very fast player. It compliments Dave's slowness" He then directed a verbal jab at Humpherys' creature base, which included such "savage beats" as Leaf Dancer and Cartographer. Humpherys joked that he "had to fill out the mana curve somehow". 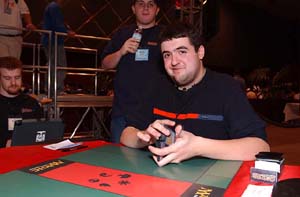 Jensen dropped a quick Angelic Wall, while Humpherys had the best two drop in the format: Wild Mongrel. It attacked and was blocked by the Wall, and Humpherys played Sylvan Might on the Mongrel. Jensen responded by bouncing back the Mongrel with Aether Burst before damage. Humpherys then brought out Twigwalker, while Jensen began to take control of the board with Nomad Decoy. Unfortunately for Jensen, he missed his fourth land drop yet again, while Humpherys summoned Chainflinger. Decoy and the Wall were able to hold down the fort for the time being, but Humpherys kept playing more creatures. Jensen had to draw lands, and he had to do it soon.

The next draw produced a laugh out of Jensen, who was obviously frustrated with his mana screw in the past two games. Puppeteer came out, giving Jensen more board control. Normally a board with two tappers and a Wall is desirable, but with only three lands out Jensen couldn't take full advantage of his tappers while developing board position. Nantuko Disciple joined Humpherys' team, which would allow him to bust through the wall. Jensen still couldn't find a third land, and sat back on tapper mana to slow down Humpherys.

Puppeteer blocked Humpherys' Chainflinger while Angelic Wall blocked Twigwalker. Damage went on the stack and Jensen targeted the blue tapper with Shelter, but Humpherys responded with Thermal Blast. At this point Jensen finally drew a fourth land, and tapped out for Dreamwinder. Humpherys untapped and thought for a minute or two, and finally played Overrun. Never at a loss for words, Chris Pikula remarked "You know, you could have just done that the faster way and show him the Overrun".