By now these two players should need no introduction. They both have probably the best draft decks in Pod One, and are playing to see who goes 6-0 going into the second day. With the cut-off for Top 8 something like 9-3, the winner of this match would already be in a great position. If anything, Yann's deck is the better one. 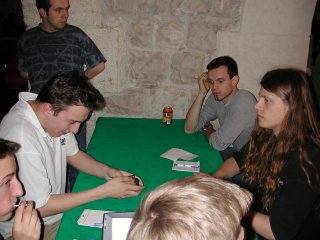 Olivier went first, but Yann had the faster start with a Sunscape Apprentice on his first turn and then a fairly useless Crimson Acolyte on his second - Olivier had no Red in his deck. Ruel played a Tower Drake on his third turn but elected not to block either of the 1/1s.

Hamon summoned a third 1/1, Samite Pilgrim, and Olivier played an Aurora Griffin. Nevertheless he couldn't block the Crimson Acolyte with it because of the Apprentice. Hamon stopped the aerial assault from getting out of hand by playing a Razorfoot Griffin, that held off all of Olivier's flyers including a Faerie Squadron with kicker, and a Silver Drake.

Yann played a Sabertooth Nishoba and Olivier Probed with kicker to try and find an answer. This emptied Yann's hand but the Nishoba brought Olivier down to ten while he was tapped out. Ruel had found an answer, though, and used Rushing River to bounce the Razorfoot Griffin and the Samite Pilgrim before attacking with all of his flyers for ten damage.

This left Hamon unable to prevent enough damage on Olivier's next turn, and Olivier took the first game.

Yann forced Olivier to go first, and both players played Apprentices on their first turn, a Stormscape for Olivier and a Sunscape for Yann. The Apprentices traded a couple of blows before Olivier played a Tower Drake. Yann then summoned Samite Pilgrim and used Eladamri's Call to fetch a Quirion Explorer as he needed the blue mana.

He didn't summon it immediately though, as he had already drawn a Charging Troll. Olivier sacrificed his Ancient Spring to cast a Probe with kicker to try and find an answer - specifically a Mountain as he had the Breath of Darigaaz in his hand, but he didn't even find a land of any sort.

Yann attacked with all of his creatures, and Olivier threw a Stormscape Apprentice in front of the Samite Pilgrim, but went down to seven anyway. He still didn't draw a land on his next turn either, and his Faerie Squadron without kicker was far from enough to stop the Charging Troll, and Olivier scooped.

Olivier decided to keep a hand with no Islands in it, and at least he managed to confuse his opponent by playing a Plains, Mountain, then a Swamp. Hamon was unfazed, and played a Charging Troll. Ruel then immediately topdecked his fourth land - an Island, and cast Breath of Darigaaz with kicker to remove it.

Hamon did nothing for a turn as his only creature in hand was Sabertooth Nishoba, and Olivier played an Aurora Griffin. He did have an Exclude in hand but decided to tap out instead and Yann made him pay for this by playing the Nishoba.

Olivier was still hurt by only having one blue mana in play, as it meant that he could only play one spell per turn. He played an Apprentice which held off the Nishoba - Olivier could target it by using the Aurora Griffin to make the Apprentice white, but Yann kept casting spells. He played a Razorfoot Griffin, then an Aurora Griffin of his own that was Excluded, and then a Quirion Explorer.

While the Apprentice dealt with the Nishoba, Yann kept attacking with his Razorfoot Griffin, bringing Olivier rapidly to seven. Olivier seemed to be able to stabilize, however, with a Samite Pilgrim able to prvent four damage, and a Silver Drake.

Yann did have a Wash Out in his hand, but playing this would mean returning his own Silver Drake. With a Wax/Wane in hand, Yann attacked with Silver Drake and Razorfoot Griffin. Ruel blocked the Drake with his Griffin, and the Griffin with his Drake. When Yann attempted to use the Wax/Wane, Olivier had a Prohibit which killed off the Griffin.

Of course, Yann still had the Wash Out to allow him to return all blue creatures if things appeared to be getting too dangerous, but he would have to be careful to play around the Aurora Griffin if this was to have any effect. Ruel attacked with the Silver Drake and the Griffin, and this was the opportunity Hamon was looking for; he used Treva's Charm to remove the Griffin from the game.

Olivier responded with a Rushing River returning Yann's Silver Drake, and his own Aurora Griffin, before replaying the Aurora Grifin. His unusual mana base helped him out here, as it meant that the Pilgrim could prevent four damage and keep the Griffin alive. Yann replayed his Silver Drake but found it tapped at the end of his turn, and Olivier attacked once again with his Aurora Griffin and Silver Drake, this time putting Yann down to four, before playing a Faerie Squadron with Kicker.

Hamon had to think for a long time on his turn. He had Sabertooth Nishoba, Silver Drake, and Quirion Explorer in play, but he was only on four life. Eventually he decided to cast Wash Out, causing Olivier to think - would Yann name white in which case he should use his Aurora Griffin on the Explorer, or Blue in which case he should use the Griffin on his own Faerie Squadron and Stromscape Apprentice.

Probably the best thing to do was some combination of the two, and Olivier chose to make the Quirion Explorer, the Faerie Squadron, and the Silver Drake white. This meant that the Wash Out left only Stormscape Apprentice in play. Yann played a sixth land and then replayed the Nishoba.

Olivier replayed his Aurora Griffin and a Sky Weaver, and once again tapped the Nishoba when Yann tried to attack. Hamon summoned a Voice of All, a Quirion Explorer, and a Silver Drake returning the Sabertooth Nishoba. It was Ruel who was able to recover better from the Wash Out, though, with replaying the Samite Pilgrim and playing a Vodalian Serpent.

Yann decided to attack with his flyers, which was an obvious error, as Olivier used the Griffin to make the Serpent white, and then Sky Weaver to make it fly, attacking with it for the win.

This puts Olivier Ruel on a perfect 6-0, along with Raphael Levy, so they will probably play each other in the first round tomorrow.