Round 6: Yoshitaka Nakano vs. Itaru Ishida 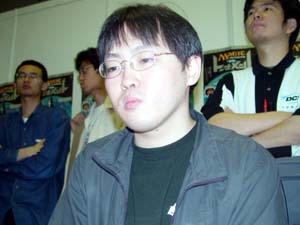 Ishida tends to be the sentimental favorite among Japanese Magic players. Before Kuroda became the first Japanese Pro Tour Champion, when you asked a Japanese player who they would like to see become the first to earn that honor, the name that came up more than any other was Ishida. Likewise, in an online Fantasy Nationals contest where players got to select who they thought would win this tournament, Ishida came in first. Why all this attention and respect? Ishida has been a fixture of competitive Magic from the beginning, and many feel that his talents have yet to translate to the big finishes that will earn him the acclaim that he deserves. Unfortunately, this tournament may not be the one to make that happen, as he came into this round at 3-2. Still, with a big winning streak he might be able to make a run at the Top 8. His opponent this round is Yoshitaka Nakano, a local favorite from Osaka who has a respectable amount of Pro Tour experience under his belt.

Nakano played a Pyrite Spellbomb on turn two, and a Goblin Brawler on turn three. Ishida cast Raise the Alarm on end step, untapped to play Skyhunter Cub, and ended his turn. The Brawler got through for two damage, and Nakano added Chittering Rats to his side. Ishida played Trinket Mage to get Paradise Mantle, then put it on his Cub and attacked through the air for three damage. Nakano played Leonin Bola to stop the Cub, and Ishida put Arrest on the Brawler, attacking with his team for four. He played a Vedalken Engineer as well, and Nakano came back with Arcbound Hybrid, keeping it back on defense and giving it the Bola. Ishida played a Spawning Pit, and the Bola tapped down the Cub. He attacked with the rest of his creatures, getting through for four more damage. Ishida's Neurok Spy was good enough to get Nakano to finally sacrifice his Pyrite Spellbomb, but not before Echoing Ruin dealt with the Spawning Pit. Ishida played Leonin Den-Guard and gave it the Mantle, since the 2/2 Cub was enough of a threat considering that Nakano only had a Hybrid out on defense. Nakano did improve things a little by playing Sculpting Steel to get another Hybrid, which wasn't spectacular but at least provided a much needed body. Nim Replica came out on the following turn, and Ishida played an Arcbound Worker.

Nakano got a third Arcbound Hybrid onto the table, getting a laugh out of Ishida. Thanks to the Engineer, Ishida played Opaline Bracers set to four. Nakano played a Thermal Navigator, and the game was still at a stalemate. Nakano continued to add creatures to his side, however, while Ishida couldn't keep pace. The strength in numbers strategy started to work, thanks to the Bola tapping down blockers before Nakano's attacks. When Nakano played his fourth Hybrid of the game, Ishida nodded his head and scooped up his cards.

Ishida started with Conjurer's Bauble and sacrificed it, then played Leonin Squire on turn two, getting it back. A third turn Squire provided another card, and Nakano evened things out a little with Chittering Rats. Ishida played Spawning Pit and had a Squire trade with a Rats, putting a counter on the Pit after damage went on the stack. Nakano played an Arcbound Hybrid, and Ishida summoned Neurok Spy. Nakano put Cranial Plating on his Hybrid, and got a block and trade out of the Spy, as Ishida got another counter on his Pit. Nakano played a Nim Replica, and on end step Ishida made a 2/2 token, along with two 1/1s off Raise the Alarm. He attacked with his team, and the Replica dealt with the Soldier tokens by blocking one, and activating to kill the other after damage went on the stack. In the process, Ishida got two more counters onto Spawning Pit. With no more defense available, Nakano fell to the tokens a turn later. 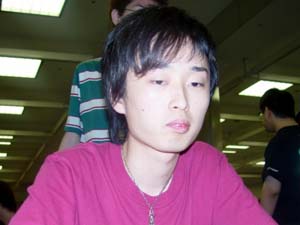 Nakano had a first turn Pyrite Spellbomb, followed by an Atog. Cranial Plating made it a bigger threat, and when it attacked Ishida cast Raise the Alarm. Thanks to the Spellbomb, however, the Atog would remain safe while not requiring an artifact to be sacrificed. Trinket Mage tried to trade with the Atog, but Nakano used Lose Hope to keep combat in his favor. Ishida summoned a Spire Golem, along with the Conjurer's Bauble he got from the Mage. On end step Shatter destroyed the Golem, and Nakano played a Hybrid to put more pressure on the board. Steelshaper Apprentice gave Ishida an expensive blocker, and Nakano played Sculpting Steel to get another Cranial Plating, giving it to the Hybrid. Ishida played a Cranial Plating of his own and put it on the Steelshaper, but as his only artifact it was less than impressive. Still, the extra point of power meant that it could at least block and trade with the Hybrid. When Nakano attacked, that's exactly what happened, and Ishida used Regress to bounce back the unblocked Atog. Nakano put it right back into play, and Ishida played Skyhunter Cub. The Atog grabbed the Plate, and Nakano played Amodet Lurker, giving him the extra body necessary to force through lethal damage.